From the book's cover
The Olympic Games are under attack. Only Private, the world's most exclusive detective agency, can save them.

July 2012: The Games have arrived in London and the stage is set for one of the greatest ever showcases of sporting excellence.

When Sir Denton Marshall, a key member of the London Olympic organizing committee, is found brutally murdered, Peter Knight, head of Private London, is called to the scene. Private are working with the organizing committee on security for the Games, so Denton Marshall was a valuable client. But there is a more personal link: Denton was also the fiance of Knight's mother.

Knight is devastated by Denton's murder, but it soon becomes clear that this is no isolated incident. The killer is targeting the Games itself, and the lives of everyone involved are under threat. 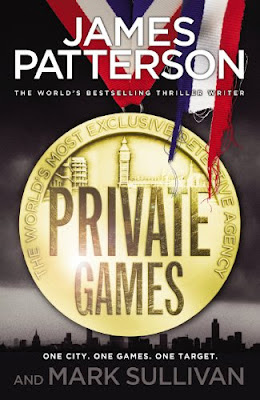 
Private Games is a story based in London, Olympics 2012 to be precise. There’s a maniac, who worships the ancient Olympics where according to him, the games were played with true spirit, while the modern Olympics are marred with corruption. He identifies himself as Cronus, who was actually that Greek god who ate his children! Two stories run parallel through the book, one of Cronus and three women whom he recruited as his ‘Furies’. The women were sisters from the Balkan war around 1995 and had turned into savages with incredibly high killing instincts. Cronus himself is a mystery resolved only towards the end. With the Olympics taking place at a large scale in London, the moment Cronus and his Furies have waited and planned for since the past seven years, it’s going to be a bumpy ride! The other story is that of Private London’s investigator, Peter Knight, single father of two year old twins Luke and Isabel, lost his wife Kate during childbirth. Peter plays a major role in the investigations about Cronus and his activities.

The story is thrilling (of course, it’s a thriller!), events cleverly planned and I must say, surprises turn up every now and then. Maybe because I read the first half bit by bit spanning a few days (thank you college), and the second half in a couple of days, the later part seemed to be more fast paced. Really, you know that wonderful feeling of being on a great ride? That feeling coupled with the thud thud of my frantic heart was how I can describe what I felt while reading it! I've mentally hit myself for not having read James Patterson earlier (don't kill me, but it's true), he's an amazing writer! Great story, well defined characters, wonderful descriptions of places, people and events (you know how I'm such a big fan of good descriptions!). The book took two different POVs. One was that of Cronus and the other was written in second person, the story about what was happening, with Knight and Private at the center.

Even though I did not fully understand why Knight's family and his story was the focus, along with the killings at the Olympics, I definitely admire the way they've been projected. A man with a responsible job and babies no nanny can control, no wife, his mother's love murdered, torn between work and home. I like realistic stuff and this was a great example. I also admire Karen Pope, a reporter who plays a key role as she gets sent letters from Cronus relating to the murders. She's a smart woman, with a quick tongue, but a good heart. The Olympic part of the story is also very interesting, especially considering that the actual Olympics happened after this book was written and published! The descriptions!! Love them. Cronus seems like a maniac but you get to understand an important aspect of life. Those who suffer, unfairly and subjected to all that isn't humane, can easily turn into people full of hatred and feelings of vengeance. See? Another solid reason why everyone is to be loved, or made to feel that they're loved. Anyway, when the reality about Cronus was finally out in the open, I swear I could not believe it! Told you, surprises everywhere!

There was just one thing I wished could have been made better. At some places, like when the Furies executed the triple Chinese murders, the precise role of one of them (Marta) wasn't there anywhere. That made it confusing. Similarly, when Luke 'saves' his dad by biting the assailant (not getting into details, it might spoil the thing!), it seems unrealistic. Seriously? A three year old? And if it's so important to keep Knight captive, the captor would go and take a three year old to the washroom? Seems kind of silly. The way it all ended was good, though. Everything fell back into place gradually, not like in some books where the ending is cramped in a single chapter. All possible questions from a reader's perspective seemed answered. I did not enjoy one aspect of the ending, which I've mentioned in the spoiler, but then, that's a completely personal perspective. A story is a story, however it ends. :)

Too many murders, I would say, but it was still okay. One thing I really liked was the way it concluded saying that the theory about modern Olympics being driven by corruption doesn't really hold true. Consider these lines from the book:

' You see that Cronus? You can't snuff out the Olympic spirit because it doesn't exist in any one place; it's carried in the hearts of every athlete who's ever striven for greatness, and it always will be.'

To summarize, a great book with a well narrated plot, well defined characters and seriously, new techniques to cause damage! :P

Recommended for readers who like thrillers and mysteries, young adult and adult readers!

Now the spoiler. Read only if you don't mind knowing bits of the story.

**Spoiler**
Okay, what about Karen Pope? I so wished she'd be the one Knight would go for! But when she gets with someone else, I felt like stopping it right there. I had already expected that they'd get together. As for what finally happens with Knight when it comes to 'a-mother-for-his-kids', it seemed just okay, nothing very exciting, especially since it was described in just a page. True, we could now connect how Knight was drawn to her when she performed, but it could have been more. Something more solid, maybe?
**End**