How to be Popular!!!

Do you want to be popular?
Everyone wants to be popular or at least, Stephanie Landry does. Steph's been the least popular girl in her class since a certain cherry Super Big Gulp catastrophe five years earlier.

Does being popular matter?


It matters very much to Steph. That's why this year, she has a plan to get in with the It Crowd in no time flat. She's got a secret weapon: an old book called what else? "How to Be Popular."

What does it take to be popular?


All Steph has to do is follow the instructions in The Book, and soon she'll be partying with the It Crowd (including school quarterback Mark Finley) instead of sitting on The Hill Saturday nights, stargazing with her nerdy best pal Becca, and even nerdier Jason (now kind of hot, but still), whose passion for astronomy Steph once shared.

Who needs red dwarves when you're invited to the hottest parties in town?


But don't forget the most important thing about popularity.


It's easy to become popular. What isn't so easy? Staying that way.

My thoughts!
How to be Popular is one book that I had first saw when I was a young teenager in a bookstore and it had instantly grabbed my attention. One, the lovely cover! Two, the blurb that talked about a girl who’s very much like me. I mean, I wasn’t really the most popular person in my school. Not that I wanted to be one, but people acknowledging your existence feels good nevertheless. Anyway, I never actually got around to getting that book, until I started using my new Kindle! (Yes, I got one! :D). It’s the first book I read on that device and I’m so happy I chose this one! I knew Meg Cabot can never disappoint me. ;) 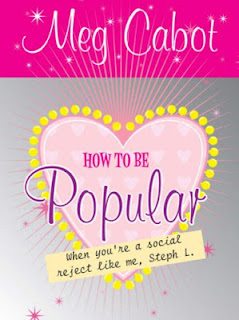 Steph Landry has been hugely unpopular, just because she once spilled a Super Big Gulp on Lauren’s white D&G Skirt. It’s been five years, and the school kids and the whole of the town of Bloomville in fact, knows the phrase, ‘Don’t pull a Steph Landry’, coined by Lauren as an expression for something weird or embarrassing anyone does. It’s actually too much for Steph, who decides to get back at Lauren by becoming popular herself, thanks to a book she found in Jason’s attic, called ‘How to be Popular’. It’s a funny and humor filled story about how Steph goes about becoming popular (and grabbing the attention of the school’s cutest guy on whom she harbours a major crush). Steph as a person is quite determined, a total smart alec when it comes to arithmetic and calculations (she handles her mom’s bookstore’s cash counter. I wish I had a bookstore too!) and whatever she does to make things in her favour, she’s also sensitive and kind. I liked Steph as a character except for the fact that she takes a hell lot of time to figure out her feelings, which seem kind of obvious to the reader. But then, she’s like any other sixteen year old. Confused.

The good thing is that the book doesn’t get off track. As in, it stays focused on the main characters and doesn’t delve deep into the lives of other family members who’re mentioned, except for Steph’s grandfather and Jason’s grandmom, who’re getting married. Also there are related excerpts from the book Steph found, that pertains to tips on how to behave in order to be popular. The funny thing is, they’re actually helpful. ;) How to be Popular retains Meg Cabot’s trademark style, the protagonist as a teenage girl with a problem, well defined main characters, detailed with a happy ending! I love happy endings. The writing style is as usual, in first person, conversational and filled with humor. I guess the USP for this book is that it’s a realistic story (though Lauren making her life hell just over one incident seems like too much, also the love thing with Becca and Jason and Stuckey).

Some quotes from the book:

‘Popularity is the easiest thing in the world to gain, and the hardest thing to hold’ ~ Will Rogers

‘Avoid popularity; it has many snares and no real benefits’ ~ William Penn

‘Avoid popularity if you would have peace’ ~Abraham Lincoln

In short, it’s a fun, light read recommended for teenage readers, YA readers, and those generally wanting a light, fun book. :)

PS- I recently created a Facebook page for this blog. I would love it if you would join that! Click here.

PPS- Now I’m reading Jinx, another standalone novel by Meg Cabot, again on the Kindle! Even though it’s the basic model, I so love it, especially since I’ve discovered how I can actually use it to read while I’m sitting in a boring class. ;)