Five thousand years ago, there came to earth a magical being called Krishna, who brought about innumerable miracles for the good of mankind. Humanity despaired of its fate if the Blue God were to die but was reassured that he would return in a fresh avatar when needed in the eventual Dark Age—the Kaliyug.

In modern times, a poor little rich boy grows up believing that he is that final avatar.

Only, he is a serial killer.


In this heart-stopping tale, the arrival of a murderer who executes his gruesome and brilliantly thought-out schemes in the name of God is the first clue to a sinister conspiracy to expose an ancient secret—Krishna’s priceless legacy to mankind.

Historian Ravi Mohan Saini must breathlessly dash from the submerged remains of Dwarka and the mysterious lingam of Somnath to the icy heights of Mount Kailash, in a quest to discover the cryptic location of Krishna’s most prized possession. From the sand-washed ruins of Kalibangan to a Vrindavan temple destroyed by Aurangzeb, Saini must also delve into antiquity to prevent a gross miscarriage of justice.

My Thoughts
I’m admitting, having read only a few Indian authors, that too contemporary, I held a general, biased view for Indian authors. The old ones used to be good, the new ones with those college-type stories? Nope. But oh-my-god! Ashwin Sanghi is so not like that! I had heard a lot of great stuff about Chanakya’s Chant, maybe even added it to my TBR, but hadn’t really got around to reading it. So when The Krishna Key was up for review at blogadda.com, I thought, why not? He created an interesting-sounding bestseller, this one might be good too. For a change, I was actually right. This is one serious author!

The book is based on ancient history, primarily that of Krishna, mixed with the present day scenario where there are historians, researchers, nuclear-stuff-researchers, maniacs and lawyers, having an in-depth knowledge about this history. Some of them are working on proving that Krishna wasn’t just a myth, but had really existed and boy-oh-boy, does that make this book so interesting! I had actually never been able to understand a single thing about ancient history before, and I guess if books like this are made for school kids, they’d never forget it. Okay, coming back to the topic. One, the book’s filled with a lot of information. When it begins, there’s a murder, a very scary-looking mystery, some fascinating facts and a chase begins. The celebrated historian who was murdered, Anil Varshney, had been successful in discovering four mudras, or seals that supposedly related to the time of Krishna. He decided to provide the four seals to four of his friends and well-educated men in their respective (and related) fields, one of them being Ravi Mohan Saini, who plays an important role in the book. 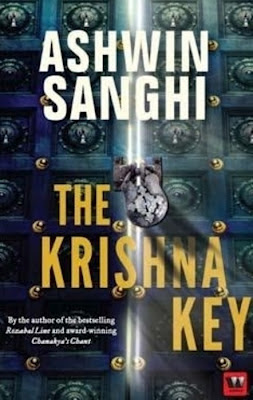 The best thing about this book was the wonderful findings about history, about all those places related with Krishna: Dwarka, Mount Kailash, Mathura, the Somnath temple, about the Indus Valley Civilization Saraswati civilization, the Mahabharata, the Vedas, the wonderful and jaw-dropping information related to the history of various clans and religions and about different religious symbols and their actual meanings! I felt astounded with all that information. But as the book progresses, I think the reader might start getting confused, unless he’s been reading it very carefully. I found myself having to refer to the previous pages to re-check some facts and then move on. Towards the last 100 pages or so, I kind of thought ‘too-much-information’!

The second unique thing about the book was that there were 108 chapters, each of them beginning with the story of Krishna, from Krishna’s POV, beginning with how Vishnu decided to stay on Earth as Devaki’s eighth child. The snippets in italics from Krishna’s POV are interesting, as for me, it gave a lot of information and I read a story I never before understood. Now I can say I do know something about that too! However, these only added value in the beginning. True, what part of the story relates to the present was somehow related with the parts of the story narrated about Krishna’s life, but when the book’s going at a strong pace, like, a scene with interesting turns and your heart’s beating wild, these snippets break the flow of your reading. Towards the later part, I mostly skim-read those, didn’t make much of a difference. Though it did help (in the beginning) in understanding the story better, as we get adequate background to the real story/myth. And oh! The number 108: it’s been emphasised a lot and there are a hell lot of things about the ancient significance of this number!

The pace of the events and the thrill, keeps readers hooked. It’s very well researched, like very. It’s evident, even if you don’t look at those pages and pages of references! It’s actually impressive, and I’m personally a great proponent of books that are intellectually stimulating. :)

Now, coming to the thing that popped up in my mind, that was there quite a lot of times and in the two reviews I read about this book, they mentioned it too. As I began reading, after a few pages I thought, ‘This is so like Dan Brown!’ Really, Dan Brown talked of history relating with the Bible, Ashwin Sanghi talks about similar stuff using the Bhagwad Gita! There were definitely a lot of similarities, but I don’t mind that much, I realize. Because even from all those researched works, you realize that all that history is intermingled. What all those ancient Jesus-related symbols meant are just the same as Indian ones, only with different names. Apart from information overload, too much of the real epic breaking the flow of reading, this was the only thing I thought could have been improved. But even then, it's okay!

I was too focused on all the fascinating pieces of information to focus on characters, though I was definitely shocked to see the change that happened. They weren’t much predictable. The other thing I didn’t much like was, too many murders! Gruesome, somewhat. Anyway, it’s still a great read, if you want to learn more about ancient history and believe me, as boring as these two words sound, it’s actually very interesting! Also, if you’re into reading books with a lot of knowledge and those that have a thrilling plot, be sure to read this book! Highly recommended! Just make sure you have a lot of time with less breaks, in case you’d forget what you read before.

This review is a part of the Book Reviews Program at Blogadda.com. Participate now to get free books!