Handle With Care is the second Jodi Picoult (pronounced as 'Pee-koh', by the way) book I've read. The first one was My Sister's Keeper (which I haven't reviewed, thanks to the new gruelling schedule) and that had me hooked (and emotionally charged up). Thus it was only natural that I'd pick up another Jodi Picoult book if I see it on the shelves in the library. God, it looked so inviting and I'm totally glad I read this one! It was simply, purely, just an amazing experience. Like, I'm officially now a big Jodi Picoult fan! *clap clap* ;)


Things break all the time.


Promises break.
Hearts break.
Every expectant parent will tell you that they don't want a perfect baby, just a healthy one. Charlotte and Sean O'Keefe would have asked for a healthy baby, too, if they'd been given the choice. Instead, their lives are made up of sleepless nights, mounting bills, the pitying stares of "luckier" parents, and maybe worst of all, the what-ifs. What if their child had been born healthy? But it's all worth it because Willow is, well, funny as it seems, perfect. She's smart as a whip, on her way to being as pretty as her mother, kind, brave, and for a five-year-old an unexpectedly deep source of wisdom. Willow is Willow, in sickness and in health.

Everything changes, though, after a series of events forces Charlotte and her husband to confront the most serious what-ifs of all. What if Charlotte should have known earlier of Willow's illness? What if things could have been different? What if their beloved Willow had never been born? To do Willow justice, Charlotte must ask herself these questions and one more. What constitutes a valuable life?

My thoughts!
This book is based on five year old Willow, suffering from a rare disease caused by genetic mutations called 'osteogenesis imperfecta' or OI for short, diagnosed during Charlotte O'Keefe, Willow's mother's ultrasound done at around 27 weeks of pregnancy. When the magnitude of the disease is revealed after that ultrasound, the O'Keefe family (Charlotte, her husband Sean and daughter Amelia) is in a state of shock. However, Charlotte is certain she wants the baby and promises to do whatever it takes to make Willow's life as comfortable as possible. 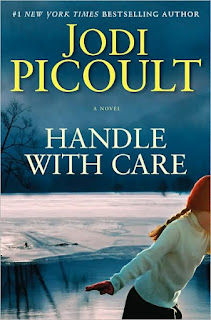 At the time the story's narrated, Willow is five years old, but looks like three. However, it's common for kids with OI to have a short stature and Willow's smarter than most people much older than her. She's funny, emotionally strong (as far as five year olds go) and a lovable kid. Charlotte spends all her time taking care of Willow, while Sean's trying to earn enough for the expenses that insurance won't cover. Amelia loves her sister, but when parents are focusing on one child, the other feels neglected and takes upon themselves to find a way to attract attention, which is what Amelia does. Apart from the small troubles Amelia gets into, she gradually turns bulimic (bulimia is an eating disorder. Read more about it on wikipedia), which is addressed towards the end of the book.

It's a heartbreaking, yet beautifully narrated story that takes the readers completely into the plot, into every single character's life, in great detail. It's not just Willow, you get to understand all that a mother goes through, seeing one daughter break so many times, struggling to keep the another into focus. A father's anger and dilemma as he struggles to earn enough, a girl seeing her sister and her whole family live a life where everything's done with 'care'. You read about a beautiful friendship break because of a lawsuit, a lawsuit that's the central focus of the book. In an encounter with a lawyer, they get a new insight: if Willow's condition could have been diagnosed earlier (during the ultrasound done at 18 weeks, where there was a tiny difference that the physician should have checked, but didn't), Charlotte could have had the pregnancy terminated. With this argument, if Willow's parents succeeded in winning the lawsuit by suing the doctor for medical malpractice, they could get millions that could be used for Willow's future medical expenses and equipment that would help her lead a comfortable life.

However, here's the catch: The doctor in question is Piper, Charlotte's best friend, and two, that Charlotte would have to argue that she'd have dropped Willow had she known about it earlier (while in reality, she never would have done that). Charlotte sees the future, but Sean sees the relationships that this lawsuit could harm. Willow would listen to her mother saying she wished she wasn't born, Amelia would lose her friend, Emma (Piper's daughter), the relationship between Piper's family and the O' Keefe's would sever. Agitated at his wife's decision, he goes against her. All through the book, there are dilemmas, both moral and ethical. And relationships. It's simply a beautiful, detailed read about a family and its tribulations, how they live if one member of a family's disabled. Though there are some controversies and issues in and out of the book, I still liked it. Loved it, rather. :)

I felt a mild turmoil inside me while and after reading the book. There are so many things we take for granted in our lives. True, our lives are not perfect, but it's still better than many. The way it was written is so profound, it takes your breath away, literally! And I'll admit, I cried when Jodi Picoult's book, My Sister's Keeper ended and I thought this one would be similar. This might have been true, had I not felt extremely sad and slightly angry with the ending. I don't want to put any spoilers, but it really didn't work for me. :|

There are some quotes from the book I loved a lot:

“I think you can love a person too much.
You put someone up on a pedestal, and all of a sudden, from that perspective, you notice what's wrong - a hair out of place, a run in a stocking, a broken bone. You spend all your time and energy making it right, and all the while, you are falling apart yourself. You don't even realize what you look like, how far you've deteriorated, because you only have eyes for someone else.”

“People changed. Even the people you thought you knew as well as you knew yourself.”

“Things break all the time. Glass and dishes and fingernails. Cars and contracts and potato chips. You can break a record, a horse, a dollar. You can break the ice. There are coffee breaks and lunch breaks and prison breaks. Day breaks, waves break, voices break. Chains can be broken. So can silence, and fever... promises break. Hearts break.”

Recommended for: Everyone, actually. Especially if you love family stories.