The book starts with the definition of ‘To Cubicle’: ‘The act of sitting in a confined workspace for extended hours, stifling interpersonal communication, creativity, and any other expression of individuality, which makes the individual forget life beyond the immediate demands of the job’.

The Cubicle Manifesto is essentially a self-help book for pure workaholics, who’re stuck in their cubicles voluntarily or due to the demanding nature of their jobs. Written as a narrative, it’s a story about how a young and harried manager, Mayukh, discovers a new way of life beyond the cubicle- thanks to what Mayukh thinks is a virus. He’s always been a primp when it comes to work, he finds it hard to settle and think of anything much beyond his work and office. Leaving for home late at night and in the process missing dinner with his wife Sudha and three year old son, Aadi, checking his BlackBerry every night, had become a lifestyle for Mayukh, until his laptop’s been taken over by a mysterious (and sometimes funny) virus.

When the virus first strikes, he’s agitated. There’s a very important presentation coming up in the next week and he’s hell bent on making it a success. But his laptop wouldn’t show anything apart from a single message on a white screen ‘The spectre of cubicle tyranny is haunting you’. While he tries to decipher the message, make his laptop run again, new messages flash based on what he’s been thinking. For instance, he scheduled a meeting at 6 in the evening, but without his laptop, he’s forced to shift the meeting to the next morning. That’s when he notices his team feeling relieved and happy and enthusiastic in the morning meeting. The virus seems to understand Mayukh and does what should be done, even when Mayukh feels the opposite. Gradually he realizes that he’s been able to have more dinners with his family, enjoy outings and increased his happiness in the process. Mayukh starts believing in the virus as he sees positive changes in him and in his team (he started interacting more with them, by going out for lunch with his team rather than grab a hurried bite sitting in his cubicle). In just a week, he’s living a life he couldn’t have believed he could, just by altering a few minutes and habits from his ‘schedule’. 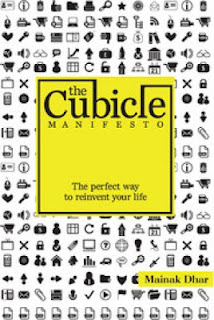 My Thoughts
I actually enjoyed reading this book so much, it really took me by surprise! I never thought a self-help book could be this interesting. The best thing of course, is the narrative aspect. Stories attract and help you retain some useful pointers. The even better thing was the idea of Mayukh’s laptop (and BlackBerry) infested by a virus that seemed stubborn enough to want him to live his life better. When the virus first struck, it was scary. I mean, the thought of having your computer come up with messages related to what you’re thinking is scary enough! As the story progressed, I started liking the timing and messages the virus gave, they’re actually so useful and really workable. Anyone can apply those pointers in their lives and change the way they’ve been living, controlled by their work lives. Also, the virus did have a sense of humor! Some messages were really funny. ;)

The book gives practical, easy-to-apply ideas that can change anyone’s life for the better. As Mayukh realizes the power of his new living, the virus encourages him to help others suffering from the same cubicle tyranny as he was affected. I really liked the idea of ‘You Corp’ proposed in the book. It says that your life is the company you own and it’s your job to bring its performance to the top, to make sure the stakeholders in You Corp (your loved ones) are the ones you benefit the most. The virus regularly shows Mayukh the graph of his You Corp, which was sloping downwards for a while, ever since he had been too busy to spend time with his family. It peaked up little by little as and when he did something for his wife or son, like have dinner with them, attend his son’s annual function, spending a weekend just with them without thinking about work, starting exercise, etc. It’s just so good!

Another interesting point was the NPV of Happiness, that said that the happiness you’ll derive out of the present moment will be much more than the one you’re postponing, thinking you’d enjoy it later. In other words, a day enjoying a picnic is better than waiting for time to go to Europe for a holiday. Don’t postpone happiness. It really made the whole concept more interesting. Also, it doesn’t just preach what you should do, but also helps you understand how it can really be applied in your life. Meaning, the virus helps Mayukh do all that he needed to do, by adjusting stuff in his schedule. It indirectly talks about time management and really, it’s so simple. 15 minutes for reconnecting brings new ideas and breakthrough deals! I also greatly enjoyed the ending. You’d think with a short book, the ending would be abrupt, but it was just right. :)

The author has a really good writing style, being able to make the reader understand the concept in such an easy manner. I couldn’t stop reading, to be really honest, it had such a nice flow to it, so that I ended up reading it in one sitting! It’s also a short book and I see it as the kind that even reluctant readers would be able to read without whining much about it.

Overall, it’s a great read, thoroughly enjoyable, gives an amazing message in the simplest and beautiful way possible, a must read for those who can’t think of a life beyond work! Seriously, you’d know how easy it is!

Thank you Random House publishers for sending a copy of this book!