From the book's cover
P.K. wants out. Out of town before her parents ship her off to boarding school, and out West where she can rock climb to her heart's content. Trouble is, she needs a climbing partner, and none of her friends is up for it.

Critter wants out, too. He's had enough of the mind-numbing drugs in the psych ward. And he's ready to climb anywhere with a girl drop-dead cute as P.K. Trouble is, he doesn't know her.. yet.

They begin as strangers, but life on the run and their shared passion for the rocks draw them closer everyday. Not only are they climbing in awesomely beautiful national parks like Yosemite, but they seem totally made for one another. Then the cops show up, with an arrest warrant, and P.K. and Critter have to decide whom to trust with their lives- the families they left behind or each other.

My thoughts
Jump, for me, turned out to be a book that would be responsible if I actually go out and learn rock climbing, after mountaineering. Or is it included? I'm not sure. Anyway, as I'm already in love with the idea of mountaineering, I naturally picked this book up from the library as soon as I saw the lovely cover! I was about to return it back without reading (less time :| ) but the library was closed that day. I started reading this on my way back and just adored it in the first few pages itself! 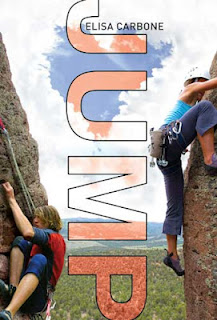 P.K. is a lot like me in a lot of aspects. Except of course, I'm not into rock climbing since the age of 12 nor do I have the guts to run away from home, before I'm sent to boarding school, to actually 'live your life the way you want, free from the stupid society shackles'. But I do share her view of how education and school's system makes us more stupid and closed than what we could do if we have more practical kind of a knowledge. Like, consider this from the book: 'Although compulsory schooling was begun in this country mainly in hopes of educating people worthy of democracy, other goals also imbedded themselves in the educational system. One was the goal of creating obedient factory workers who did not waste time by talking to each other or day-dreaming. ~ The Teenage Liberation Handbook by Grace Llewellyn'. Just about sums up my own thoughts.

Otherwise, P.K.'s actually smart, a solid rock climber, too much into her dream of climbing the great rocks, an adventurer, and worries like any normal teenager. She actually grows to like Critter, however annoying he may be. Critter's 'problem' seems like something scary at first, but as you get to know more about him, you realize that what he knows and believes in is actually very interesting and just like the Law-of-Attraction-made-famous-by-Rhonda-Byrne thing, apart from the philosophical stuff about living life to the fullest. Liked that thinking!

In general, I loved the descriptions of all the events, especially the zest about the climbing. It's been described so beautifully, I so felt like just being there and doing that climbing with those guys! The sequencing of events was fun, the chase felt realisctic, though I did feel surprised at the amount of trouble they're ready to get involved in for an adventure. I guess love for something makes you do that. To make it a bit realistic, P.K. does get scared, but Critter's always there with his continuous stream of 'live in the here and the now' thing. In fact, I've started looking at stuff that way too! :P

The different POVs in the book make it slightly different, as in, the book's more like a diary of sorts, with one P.K.'s POV then Critter's. It does help see things from the points of view of two different individuals with their own share of troubles, but sometimes it gets confusing. Also, I hate to say it, but the ending!!! It-SO-could-have-been-more! We knew Critter was going to have a problem later and I expected something about him too, as was the case for P.K. But no, there was a short happy ending, kind of abrupt and what exactly would Critter's future be, no idea! I didn't like that, I'm more of a 'give-me-a-complete-story-with-a-well-explained-ending sort of a reader. Anyway, it is a fun read, gives you a lot of info about rock climbing and is funny!

Recommended for readers looking for a light, love-cum-sports-adventure story, those who can handle differing POVs after every page and not get confused and adventure lovers in general!
Author- Elisa Carbone Fiction Fun reads Light reads mountain climbing