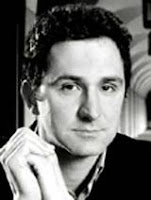 Blurb from Goodreads
Three years have passed since the magician Nathaniel helped prevent a cataclysmic attack on London. Now an established member of the British Government, he faces unprecedented problems: foreign wars are going badly; Britain's enemies are mounting attacks close to London; and rebellion is fomenting among the commoners. Increasingly imperious and distracted, Nathaniel is treating Bartimaeus worse than ever. The long-suffering djinni is growing weak and vulnerable from too much time in this world and is nearing the end of his patience.
Meanwhile, Nathaniel's longtime rival Kitty has been stealthily completing her research on magic, demons, and Bartimaeus's past. She has a daring plan that she hopes will break the endless cycle of conflict between djinn and humans. But will anyone listen to what she has to say? 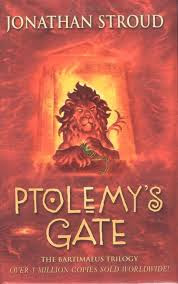 I love reading books by Jonathan Stroud. Before I picked up this trilogy, the only book by Stroud I'd read was called The Leap, which had intrigued me for many years afterwards. Reading the Bartimaeus trilogy, I'm mighty convinced that Stroud is a writer I greatly admire. Ptolemy's Gate, the final book in the series, brings everything to a satisfying conclusion. Although the book is divided into stories of Bartimaeus and also those of Nathaniel and Kitty, I found the first book to be more of a Nathaniel's book, while the second seemed to focus more on Kitty. The third book focuses more on Bartimaeus--we get to know about the past of this beloved and unique djinn, his favourite master, and how the past relates to the present.

Meanwhile, the story is progressing with Nathaniel finding himself in thick soup in the government ranks. He needs to desperately find out and bring an end to the rebellion among the commoners, and for that, he is using Bartimaeus recklessly, so much so that the djinn's essence is nearly gone doing Nathaniel's bidding. That's not all, the excitement gradually mounts up as Stroud narrates parallel stories in a finely balanced fashion, so that the greatest mystery of the book is unveiled at the time when everything suddenly comes together and makes sense, and it is fantastic!

The book was gripping right from the beginning, which is why I love the author's writing style. Bartimaeus' narrations were fun as usual. I absolutely hated Nathaniel when he was being such a one-sided guy, but his actions were the result of a stressed state of mind, so that somewhat became all right in the end. When it comes to Kitty, though, she absolutely steals the limelight! She has taught herself magic for the purpose of defeating it, she manages to find out secrets no one else could work out, and she plays a major role in bringing an end to the savage destruction being inflicted in London, and which has left even the government in tatters.

I really loved the way the story has been presented in this trilogy. Each book has a certain theme, but the connecting stories and characters grow and develop throughout, which makes the whole story connect and go forward. Even though I didn't prefer the ending to be exactly the way it was, it was still nicely wrapped up. Thank goodness Jonathan Stroud wrote a fourth Bartimaeus book (The Ring of Solomon) that has nothing to do with Nathaniel and this story. I'll be reading that next!

Recommended for: Fantasy lovers, Young Adult readers, Teenagers, anyone looking for a fantasy-trilogy. You will not be disappointed.