Some cool facts around this book
1. The village of Moonfleet is inspired from East Fleet in Dorset in England.
2. The author, J.M. Falkner had an affinity for weapons and interest in the supernatural.
3. J.M. Falkner had other interests, but is known for his three novels, the most popular of which is Moonfleet. He wrote a fourth novel but it was lost when he left the only copy on a train and never saw it again (*sigh*)

How I came to this book
(I really like listing down such things as how I came across particular books. Some books are loved even more because of the way they came to your life, is it not?)

I had an old, yellow-paged copy of Moonfleet among my first ever book collection, which makes it date back to 2003 (approx.). I forget who gave it to me, with the most probable person being the aunt who has often gifted books in my early years (note to self: be such an aunt to someone!). I think I remember dad telling me how it was my aunt's and how she had enjoyed reading it and thought that I would like it too.

Honestly, I was intrigued by the book (look at the cover! Plus, it was a battered copy, which is even more alluring) but it has taken me twelve years to get down to read it. I have tried picking it up quite a few times, but either found my way across to another book, or found it difficult to get through more than two pages. A few days back, finally, I picked it up and decided to start reading it during my long metro-train travel to work. I think it was one of those books that you wait to read at the right moment, as I don't think I could have enjoyed it more had I read it somehow on my earlier attempts. It was a delight to read Moonfleet, and I am grateful to whoever made me have this wonderful copy. (Still, I do not forgive the brat who has doodled on some pages. The nerve of some kids!)

What is Moonfleet about?
There is a fifteen-year-old boy called John Trenchard living in the Moonfleet village in Dorset (south of England) with his aunt. John's aunt is strict, though caring, so that John doesn't learn to love her much, though he was affectionate. Until one day, she deserts him for getting into mischief--when John was only following his curiosity and instinct--and leaves John fending for himself. 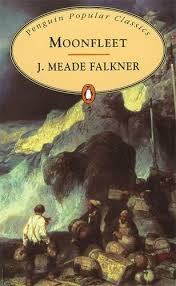 Elzevir Block is a man most respected by some village folk, while some kept well away from him, including young John. He knows that Block's son, David, was shot by a Customs Officer, namely Maskew, after which Block had turned even more formidable. Yet it is Block who shelters John and cares for him as if he were his own David. Mr Glennie is the village priest and admin. head while Master Ratsey is the sexton, involved with the smugglers.

Then there's the whole mystery of the Mohune vault, where Blackbeard, the last of the Mohunes (who had created Moonfleet) also rested and had cast a curse. Like most villagers, John believes in the story of Blackbeard's spirit digging the cemetery grounds looking for his lost treasure, until the time he discovers the secret, and finds a clue that, at first, leads him nowhere close to the cursed treasure. The story, however, is more about the paths John's life takes as he starts living a life among smugglers (of liquor) and his quest to find the lost treasure.

Why do I like Moonfleet so much?
Writing style: This book is a classic story for children, teenagers and young adults, written in first person with John being the narrator. There's something of a mystery driven in each sentence, purely because of the sentence structures! Here and there, where something of importance would arrive at a later place in the story, the author stresses on the points by tagging those as things John would be discovering later. The language is beautiful, the characters' distinct voices made for by their tones and individual characteristics, and the descriptions detailed and wonderful.

The story: I like how the author somehow makes it not just an adventure story, but a mix of adventure, mystery, thrills of the sea, and human complexity. I love how he uses the perspective of smugglers to describe all the events that take place, which makes you think quite kindly of people in the smuggling business (just because no one wanted to pay excise for good liquor! You can't be too strict about that, specially in 1750s, when the story is set). It makes a lawful person, who might think of those who follow lawlessness as inhuman, look at the other perspective. A hardened man much respected among the contrabandiers because of never being accused of felony taking immense pain to shelter a boy he barely knew anything about. The story is about John's increasing love and respect for 'Master Block', who had saved his life on more than one occasion. It is about greed, love that is incredibly patient, fatherly love, repentance, friendship, luck and perspective on life. All these themes are beautifully integrated in this story of a small village, sailors, prisoners and shipwrecks.

I have read a few books based around pirates and ships, and though this one was not strictly only about that, I still will keep it in that category because of the sheer importance of the sea in this story. I hope I would read this book again sometime and enjoy it even more! Recommended for: teenagers, young adults, lovers of mystery, adventure, classics, ships and the sea.