Starting this review with a *drool* because one, this book is amazing. Two, it is amazing. Three, it was beyond any expectations I had and so it is amazing! I can officially call this year as the Year of Discovering Awesome Indian Authors! Seriously, maybe this book isn't in the top in its category (whatever that is), but the fact that it is written by an Indian makes it all the more appealing to me because I did not think a lot many Indian authors would explore and be successful in this genre. Besides, I have certain criteria and ideas of what all a book should have if "I" were to write one, and this book had almost all those ingredients! How can someone not hyperventilate after that?

Goodreads Blurb!
Eva’s life is not her own. She is a creation, an abomination – an echo. Made by the Weavers as a copy of someone else, she is expected to replace a girl named Amarra, her ‘other’, if she ever died. Eva studies what Amarra does, what she eats, what it’s like to kiss her boyfriend, Ray. So when Amarra is killed in a car crash, Eva should be ready.But fifteen years of studying never prepared her for this.Now she must abandon everything she’s ever known – the guardians who raised her, the boy she’s forbidden to love – to move to India and convince the world that Amarra is still alive ...

My Thoughts!
The Lost Girl is based in a future time featuring The Loom where The Weavers stitch together echoes of real humans, placing a part of the human souls in them and making them live a life that echoes the lives of their 'others', the humans whose echoes they were made to be. This would give humans another chance at life, since the echoes could replace them if they died. This has been going on since the past 200 years and at present, there are three Weavers: Adrian, Matthew and Elsa. The world is aware of this, but everyone hasn't accepted the existence of The Loom to be good, and so most of the echoes are hidden from the world, and looked at as non-human creatures. The research and technology hasn't yet reached that level where the Weavers would be able to stitch an echo in the form of another body of the humans, waiting to encompass their souls, and so the present-day echoes very well have their own brains and emotions. 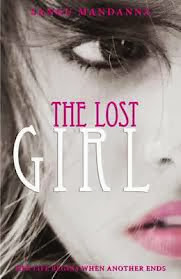 But it is against the law for an echo to do anything apart from what their others are doing. Amarra, a 16 year old teenager lives in Bangalore, India, along with her parents and two younger siblings. Her echo, also named Amarra lives in England along with her caretaker, Mina Ma. Now, the story revolves around this echo Amarra's viewpoint and life, reflecting how as a man-made-'creature', she lives according to those rules and how her guardians and caretaker love her. The echo Amarra is strong, rebellious, and very curious. Her guardians love her enough to allow her a little bend of rules every now and then, but there is always the fear of Hunters, who are against echoes and hence, a threat to them. The book very successfully and from the very beginning, is able to pull the reader into looking at life from the echo's POV, to feel her anxiety, helplessness, strength, wants, wishes and dreams.

The reader is transported from one place to another, feeling all and everyone's thoughts and feelings as the echo Amarra (who has now named herself Eva, after a difficult baby elephant she saw in the zoo) experiences a painful transition in her life as her 'other', the real Amarra, dies in an accident. Eva now has to leave behind everything she has known, the boy she loves (a forbidden love) and her loving mother-figure, Mina Ma to live Amarra's life with her family in Bangalore. This part of the story talks about how she adjusts to Amarra's life, her family, her boyfriend and deals with the many troubles: not just teenager problems but also of being accepted as an echo and yes, of hunters.

Apart from the easy, engrossing way of writing, there's such a mixed element of emotion in those words, interspersed with metaphors that sometimes don't even seem to connect, but they make you imagine and think anyway. I loved this aspect of the author's writing style. It makes the book have a lot more than just the story itself, which by the way, is unique and so creative! It's been inspired by Frankenstein, I think, which is the book that sent the author into a writing spree which turned out to be The Lost Girl and which has some references in the book too. The interesting story base compiled with the emotional, philosophical and psychological aspects make this book a complete, holistic read with hardly anything missing.

I had put off the ending for almost two weeks since I wanted to finish it when I had enough time to contemplate. The book ends well, but I so wish it would have had more scenes, some more details!! I can't get into the details here because it'd be a spoiler, but seriously!!! I want more details!! I was almost tempted to reduce the 5 star rating to a 4.5, but I'm choosing to look beyond this flaw because one, there's a difference in the way the author thought and the way I think and two, the rest of the book more than makes up for it! And oh, I think the chapters don't really need those one-word titles.

This is one of those books that don't reveal all their secrets at once! Or maybe since I read most of it while traveling, I missed out certain things that are roaming around in my head as intriguing questions, making me want to re-read the book again. Who is the 'lost' girl in the end? Amarra or Eva? Most probably it goes for Amarra, but since the protagonist is Eva and for me, it was the echo's story, it might have been Eva too. Let me just wait for my book-friends to read the book so I can discuss it and maybe I'll re-read it soon myself and figure it out! I'd recommend it to all teenage readers, young teenagers, YA readers, etc. I mean, everyone would love this book! :D Plus, it has a gorgeous cover, which is such a big plus too!

Some awesome lines from the book:
'I don't think anyone ever really lets go of the people they love.'

'The simplest solutions are usually the best'

'If you expect the worse, you're only denying someone a chance to be better'

'But maybe that's what the dead do. They stay. They linger. Benign and sweet and painful. They don't need us. They echo all by themselves.'

'What is this power the dead have over the ones they leave behind? It's strange and beautiful and frightening, this deathless love that human being continue to feel for the ones they've lost?'