I've read two other books by Cecelia Ahern, The Book of Tomorrow and A Place Called Here and had bought them both because I loved their attractive covers! Then there was one moody day when I prowled into a bookstore to make myself feel better and saw a gorgeous cover. I admit. I'm such a cover-lover! That is how One Hundred Names came into my possession. It had no blurb, no storyline, but the cover was too irresistible and I had good experiences with Cecelia Ahern in the past, so I wasn't too apprehensive. I figured it'd be good, and boy, was I ever so right! :D I loved reading this book!

Goodreads Blurb!
The new novel from the bestselling author. Journalist Kitty Logan's career is being destroyed by scandal - and now she faces losing the woman who guided and taught her everything she knew. At her terminally ill friend's bedside, Kitty asks - what is the one story she always wanted to write? The answer lies in a file buried in Constance's office: a list of one hundred names. There is no synopsis, nothing to explain what the story is or who these people are. The list is simply a mystery. But before Kitty can talk to her friend, it is too late. With everything to prove, Kitty is assigned the most important task of her life: to write the story her mentor never had the opportunity to. Kitty not only has to track down and meet the people on the list, but find out what connects them. And, in the process of hearing ordinary people's stories, she starts to understand her own.

My Thoughts!
One Hundred Names is the kind of book that may make you go through conflicting emotions, especially if you happen to be an emotionally sensitive person. Not that it is the kind of emotional that makes you cry, but the kind of book that makes you look at someone's life deeper, with all the nitty gritties, and the anxiety, the fear of impending, unknown implications of a mistake, the loss of friendship and trust. On a very basic level, it's a simple story. Katherine Logan in her mid 20s, is a journalist/writer with Etcetera magazine, headed by Constance Dubois, now fighting with cancer. Constance is like a bubble shield for Katherine (Kitty) as she transitions from an uncertain, doubtful girl to a more confident person, as she brings forward her stories with doubtful anticipation to confident excitement. 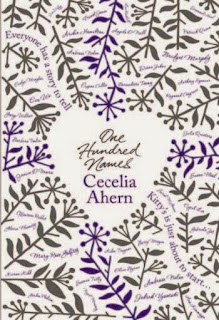 But then there was this time when she was also working as a video journalist in a TV show and made a blunder and was suspended. Her career was in a mess, Constance, her only support, was on the verge to leave her (and the world) and she had to face the ugly accusations from society. The only one thing that she kept close to her heart, that made her cling for support at a time when she, and her career was falling apart was a list of one hundred names that Constance left behind. It was once while visiting Constance in the hospital, a contemplative, quiet visit, that Kitty had asked her about one story she always wanted to write but couldn't. Constance asks her to fetch a file called One Hundred Names from her completely disorganized home and when after a few days, she does, Bob (Constance's husband) informs her about Constance's passing away.

The story then deals with Kitty and the list which is just a simple list of one hundred, unrelated, what-seems-like-random names from the Yellow Pages directory. Pete, the new head at Etcetera, not-so-keen on keeping Kitty anymore, gives her a final chance, a two week deadline for her to come up with a story. It is quite complex if you look at it from Kitty's perspective. A single young woman living alone, dealing with united hatred from the public, knowing her best friend Steve thinks she's the wrong one because she's being selfish and this knowing killing her. She's still got to put up a brave face, fight with her own emotions and get up and work towards her only way to escape: work on the list.

I won't go into the details of how she went about it, because it'd be like a spoiler, but I have to say it is something really unpredictable and when you do understand it, profound. One of the best things about the way it's been written is how it is so much from Kitty's point of view, even though it's been narrated in third person. As a reader, you're not separate from the characters. Maybe I was personally too much into Kitty's shoes because I could very much relate to her. She's a writer who used to write awesome but because of emotional setbacks, she feels her writing has lost that charm. On the face of it, it seems just like normal, her usual. But they're more like narratives, gradually missing the personal enthusiasm she infused in those words and that oozed out when readers read it. It's such a painful realization to know what you love doing isn't as good anymore, and no one's helping you get it back.

But she does. Constance not only helps her write something she has to believe in, she changes Kitty's behaviour and attitude for the better. She makes Kitty and her team look at the world from her perspective, where she sees marvelous stories in ordinariness, in everybody. She makes her look beyond her selfishness, beyond the materialistic. She makes her understand that there are many different lives and how every single person is a story in themselves. And they're all fascinating. In the whole process, she helps Kitty understand her own life and story as well. This is one theme that touched me. It's just so beautiful! :')

One Hundred Names is beautifully written, non-predictable (though I so so so wished we'd have had a more elaborate ending, but later on as I thought over possible endings, this one seemed the most fitting. I guess it'd have been hard to end this book!), and I loved the gradual romance setting in the background. :) A few lines from the book I loved:

'Some people say that you shouldn't operate from a place of fear, but if there is no fear, how is there a challenge? Often that is when I've done my best work, because I have embraced the fear and challenged myself'

'Nobody can pretend to know what people want to read or hear or see. People rarely know it themselves, they only know it after the fact. That is what creating something original is all about'