Review: The Statistical Probability of Love at First Sight

This isn't a book based on a research report, which is what I understood that people thought when they asked what book I'm reading, considering the smirky smiles and raised eyebrows. Or wait, they just might be teasing. I've become really dense these days so I wouldn't even have got to know. Anyway, this is Fiction. A story of a seventeen year old girl named Hadley missing her flight by four minutes at JFK airport, meeting this charming British boy named Oliver, both traveling to London. I'm not much of a romantic book reader, but this book was recommended more than once and it would have been foolish to ignore it just because it seemed like a love story. All of them aren't overly cheesy, y'know? ;)

Goodreads Blurb!
Who would have guessed that four minutes could change everything?


Today should be one of the worst days of seventeen-year-old Hadley Sullivan's life. Having missed her flight, she's stuck at JFK airport and late to her father's second wedding, which is taking place in London and involves a soon-to-be stepmother Hadley's never even met. Then she meets the perfect boy in the airport's cramped waiting area. His name is Oliver, he's British, and he's sitting in her row.


A long night on the plane passes in the blink of an eye, and Hadley and Oliver lose track of each other in the airport chaos upon arrival. Can fate intervene to bring them together once more?


Quirks of timing play out in this romantic and cinematic novel about family connections, second chances, and first loves. Set over a twenty-four-hour-period, Hadley and Oliver's story will make you believe that true love finds you when you're least expecting it.

My Thoughts!
I think I was very comfortable with the book since page 1. Teenage characters, realistic lives, drama: perfect setting for a story's beginning. Hadley's in a hurry to reach the airport, has an argument with her mom on the way, but anyway misses her flight by four minutes. What could possibly change in four minutes of your life? The book says, a lot! Who knew Hadley would find an adorably swoon-worthy (no, I'm not drooling. Not yet) guy who falls in love with her, just because she missed her flight? The next flight takes Hadley and Oliver in adjacent seats to London. The story spans a time period of 24 hours and half the story is based in the airport and the flight, filled with interesting conversations, observations, humor, intellectual talk, personal stories, the 'falling in love' moments and sentences that made me highlight them so very enthusiastically! (Not in a real, paperbook, genius! I was reading this one on my Kindle!) 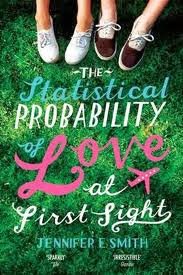 The story is beautiful. I don't think of it as just a love story, but based on family as well. How hard it is for a seventeen year old to not see her father in over a year and then to see him getting married to a woman who isn't her mom. I thought I'd always hate how she had to face this situation, but the book tackled it well, I suppose, because to some extent, it did manage to convince me how it's okay. Oliver's story made me love Oliver even more somehow! The book's very well written, not complicated, but amazing dialogues. I mean! The last book where I loved the dialogues the most was The Fault in Our Stars (Looking for Alaska too) and then this book! It's not as good as in TFIOS, but it's awesome at another level. I wish I could find a guy like Oliver, who'd talk to me like that! ^_^ (Nope, not cheesy at all. Super fun, in fact).

Needless to say, I loved the characters since they were so well described in the way they behaved and what they spoke. It's been described so picturesquely that it's not really hard to imagine it all like it's happening around you. I suppose if you can feel what the characters might be feeling, it's a pretty good indication that the book's doing well. The Statistical Probability of Love at First Sight is one such book that made me recommend it to friends just a few pages into it. I loved the story too, mostly because of it being realistic. Even the 'love at first sight' thing doesn't seem far-fetched. And I think that is why I'm liking this book so much. It just goes against how I thought a romance book would be like, but it wasn't. It was just so cool! :D The end made me go, "Oh wow. This is nice. But it seemed to end too fast. I wished the Oliver-and-Hadley-in-the-end scene could have been extended, but it's okay. Because then I realized this book has a sequel, This is What Happy Looks Like, which I'm going to read soon!

Here are some quotes from the book I absolutely loved! Maybe these would make you pick it up yourself! ;)


"In the end, it's not the changes that will break your heart; it's that tug of familiarity"

"There's always a gap between the burn and the sting of it, the pain and the realization"

"He's like a song she can't get out of her head. Hard as she tries, the melody of their meeting runs through her mind on an endless loop, each time as surprisingly sweet as the last, like a lullaby, like a hymn, and she doesn't think she could ever get tired of hearing it"

"After all, it's one thing to run away when someone's chasing you. It's entirely another to be running alone"

"Cheerfulness and contentment are great beautifiers"