I was interested in reading Sail because one, it’s a story of a sea voyage. Even though I haven’t even seen any sea in real life, I’ve always enjoyed stories of voyagers and sailors and pirates! Two, it is a crime thriller by James Patterson, whose previous thrillers I’ve loved! This one has been the best so far! :D

Goodreads Blurb!
As Peter Carlyle, a smooth-talking, super-successful lawyer, waved his family off on a sailing holiday, all they had in mind was lying back and relaxing. But as a violent storm broke out, an explosion caused the boat to vanish without a trace and the family were lost, presumed dead.

Until now. When a message in a bottle is washed up on a shore, it becomes apparent that there must have been at least one survivor.

But all is not as it seems. The race is on to rescue the Carlyles, but does everyone looking for the family really want to find them alive? Survival may be the least of their concerns. In fact, being found may be the last thing they should be hoping for.

My thoughts!
Sail is a thriller that thrills at so many levels! It begins with Katherine Dunne, a heart surgeon planning a family trip that involves setting sail on their boat, The Family Dunne with her three kids, Carrie, Mark and Ernie along with her brother-in-law Jake. The Dunne family, after the death of the father, Stuart, was falling apart. The kids turned even more bratty, Katherine spent most of her waking moments at the hospital, and provided the kids Peter Carlyle, a wealthy lawyer, as their stepdad. As they set sail, with Jake as captain (whom the kids like!), no one is particularly very happy. The story goes on to describe the suspenseful and heart-racing events that take place in the sea. More like tragic, action-filled and scary that keeps you on edge. 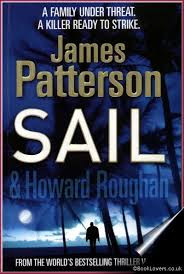 The story has been narrated in first person from Katherine’s point of view in the chapters that talk about the sea voyage and wherever Katherine’s role falls, while the rest of the chapters describe in third person narrative, all that goes on back home, the killers, the conspirators, their allies, the police, the coast guard, Peter Carlyle, etc. This is a method James Patterson frequently adopts and surprisingly, it feels comfortable enough; gives you clarity on the protagonists and other characters. Talking about the story, I loved it for the most part! Specially the scenes depicting the sea and the series of events that take place: storms, disruptions, how the family handles them and how they come out being better and understanding (and loving, too) human beings. I liked the way when the real crime conspirator is revealed (though a bit too early in the book, I think), it made me shudder and left me shocked!

The descriptive part is amazing. Even if the chapters alternate between the sea scenes and the scenes back home, it was so picturesque and clear! I give 5/5 to the writing style, for being such an easy read and having such a flow that I actually finished the book in a day! :D Coming to what makes Sail the thriller that it is, there is action and suspense, it will keep the reader feeling on edge, which in reality isn’t a very good feeling, but works insanely well in thrillers! It’ll keep you hooked onto it. You would get thrown overboard or get hungry and hot with the characters, feel anger and hatred towards the criminals, you would egg on the mystery-solvers, feel hopeful or helpless with the characters and would be hoping for the best. It’s so engaging. :’)

Another aspect important to the book being a thriller is the predictability. It’s actually not much predictable. When you get attuned to a certain way of thinking about a character, on the next page there’s a surprise waiting for you! Some such twists were oh-so-heart-stopping! I love it when books control how you’re supposed to feel, making you shift your emotions just as it’s going. The ending was satisfactory. I wouldn’t say amazing because one, I somehow don’t like how characters kill each other off so easily. I know it’s not like it doesn’t happen in real life, but still. And two, even though it was all okay at the end, and Katherine’s initial wish of the family being close is fulfilled, I still didn’t think it was 100% fair. Still, it was worth it.

"How is it that the more life throws at us, the stronger we become?"

Recommended for: If you like crime fiction, thrillers, and mysteries, I’d highly recommend this book! There are some ‘that’ kind of scenes as well, so I’d suggest if you’re not comfortable with adult stuff, leave it out!

Thank you Random House India for this amazing book!