New Moon is the second book in the Twilight series, continuing with the story of seventeen year old Bella Swan having found love in a vampire (Edward Cullen). Since I found Twilight slightly static, with some action only at the end (Thank God for the killer vampire or I wouldn't have tried to read this book!), I picked up this book to know more. And I'm glad I did. This one has more life in it, happiness and again, action, though only towards the end. It's more positive (Thank you, Jacob Black) and it seems that Bella isn't such a robot after all!

Storyline
It's Bella's eighteenth birthday and Edward's invited her over to his house. Everyone at Edward's place is excited and they have the whole place done up with decorations and gifts for Bella. However, not everyone in the Cullen household has mastered the control over their urge to taste human blood and when Bella accidentally cuts her finger while opening one of the gifts, Jasper flings himself at her, saved in the nick of time by Edward. The next few days are confusing for Bella, as Alice and Jasper left for some other place for a while and Edward starts to behave indifferently. The change kills Bella inside and she tries to cover it with the fact that Edward's upset over the "incident", until that happens.

Edward tells Bella that the Cullens are leaving- forever, and that they can't be together anymore. It's a bitter shock for Bella and she turns into an unsmiling, pale, sad and basic-things-doing human robot over the months after Edward leaves. She doesn't talk to a single person and gradually loses all friends in school. Charlie then scolds her and pleads with her to get some life back into herself! She asks a schoolmate, a suprised Jessica to accompany her to a movie. However, once there, she gets a feeling of Deja Vu and almost runs into danger when she hears Edward's voice in her head, as clear as if he's standing right next to her, instructing her to back from the danger and return home. That's when Bella realizes that she hears his voice talking to her whenever she's doing something reckless. 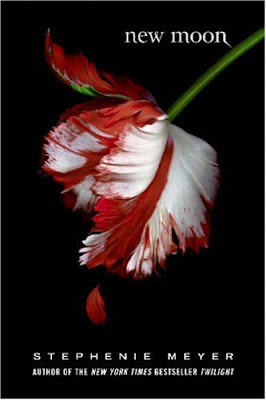 One day Charlie takes her to his friend Billy's place and there Bella becomes friends with Jacob, a fun loving, kind guy who assembles cars. They become good friends and Bella changes for the better. She finds two motorbikes with a few technical glitches and takes them to Jacob for a secret repair. She knew her dad's views on motorbikes- reckless and she's determined to be reckless and hear his voice again. It happens and she enjoys it. But there's another problem- Jacob's stopped talking to her as well and she finds out the reason- that he's turned into a werewolf and didn't want her to know. She tells him she doesn't mind it a bit and comes to know that the reason the werewolves in La Push have been out running in the forests was a vampire- an ally of Victoria (a female vampire whose mate was killed by Edward), who's come to hunt for Bella- and the werewolves try to keep her safe.

While Jacob and his clan are out hunting, Bella goes for a cliff dive into the water raging with a furious storm., from which Jacob rescues her. This is the vision Alice sees and communicates it to Edward, who later calls up Bella's house, to which Jacob answers, "Charlie's at the funeral" (in the context of Charlie being at a friend's funeral, but Edward thinks Bella's dead). Edward feels reckless and runs off to the Volturi in Italy, a royal family intent on keeping the existence of Vampires a secret from the world. It was said that for a vampire to die, all they had to do was infuriate the Volturi, which Edward was determined to do. Alice comes to Bella for help, because it's Bella who can stop him. They fly to Italy and Bella stops Edward in the nick of time from showing himself as a vampire, to a crowd of clueless humans. It's reunion time! But the Volturi only leave Bella when they promise them that Bella will be tuned into a vampire someday. (Much to Edward's disgust and Bella's joy).

Edward says he left her because he thought she would do better without his dangerous presence in her life, not because it was because of her that his family was breaking apart, which was what Bella had thought! It ends with Edward being back with Bella, and having a cold war with Jacob.

My Take
Definitely better than Twilight! The parts where Bella's with Jacob are full of energy and positivity, which makes it clear that Jacob's the right person for her. Though the parts where Bella leads a robotic life are very dull, the chapters following it makes up for the dullness. And I loved the action towards the end when Edward runs off to Italy! There are increased heartbeats when they confront the potential dangers of the Volutri and when there's this rush to get to Edward before he gives himself away. I like books with a happy ending and this surely has one. The Cullens get back to Forks, but now Bella's not with Jacob anymore. Though she wants him to stay on as her friend, he makes his visits as short as possible, because of Edward and the vampire-werewolf tiff. What happens after this seemingly interesting ending is a mystery to me, as of now, because I haven't read the next two books yet.

I would recommend this book to light mystery lovers. And good-vampire lovers too ;)
Author- Stephenie Meyer Fiction Vampire Young Adult