The Silent Patient by Alex Michaelides

on March 28, 2020
Another Goodreads choice awards pick! The Silent Patient follows the story of Alicia Berenson, an artist accused of her husband's murder. Alicia did not speak a single word since she was found with the murder weapon and her husband's body. A psychotherapist, Theo, has been following Alicia's story since the event and feels the need to dig deeper as the years pass, because of his fascination and curiosity about what happened. 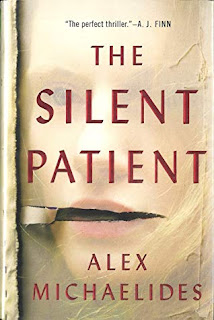 The book is narrated from two perspectives, one is Alicia's diary and the other is Theo's point of view. Alicia's diary narrates the story from when her husband gets her the diary to encourage her to write her feelings when she's overwhelmed. We get snapshots of her life and build up of the story along with Theo's POV narrating the current time - Theo finding a job at the institution Alicia stays at, and doing his best to try and get Alicia to talk.

I found the storyline and writing very engaging. The mystery about Alicia's silence unravels slowly while providing readers a complete backdrop of the past - Alicia's own personal troubles, her relationship with her husband as well as other characters who are linked in her life. As Theo continues trying to elicit a response from his patient, he shares with us his discoveries about things that seem to make Alicia respond, things that matter to her.

Overall, I found myself flipping through the pages to get to the end and unravel the mystery. I did get a hint of the twist and the killer mid-way through the book, even though I found it exciting and wanted to read to understand how it could be! It was a fresh idea, it wasn't too predictable, and the setting was more contemporary than I've been reading lately. The suspense was built up throughout the book, so I didn't get bored. The little snippets and perspectives from Alicia's art was also something new to be found in this book - references to Greek myths, exploring storytelling through art and reading meanings through painted images.

As for characterization, I felt like Alicia was the only character the author seemed to focus most on - perhaps because the story demanded it, but a couple of characters didn't seem to add much to the story other than being red herrings, I suppose. Otherwise, the plot and the narration was on-point for me. Also, a well-rounded and well-explained ending is a rarity these days in thrillers, so I was very happy with this one.

I would definitely say that I thoroughly enjoyed reading it - it was one of my fastest reads this year, and would surely recommend it for today's psychological thriller recommendations. I do feel it's now a bit over-rated, but highly delicious to read anyway!