The second book in The Books of Beginning series, The Fire Chronicle deals with the story of three siblings, Kate, Michael and Emma, who are prophesied to find the three books that form the basis of life on Earth. Since I hadn't read the first book, The Emerald Atlas, I figured I wouldn't really understand in depth, but that was definitely not the case. This book is pure magic, adventure, and a lot meaningful.

Blurb from Goodreads...
After the tumultuous events of last winter, Kate, Michael, and Emma long to continue the hunt for their missing parents. But they themselves are now in great danger, and so the wizard Stanislaus Pym hides the children at the Edgar Allan Poe Home for Hopeless and Incorrigible Orphans. There, he says, they will be safe. How wrong he is. The children are soon discovered by their enemies, and a frantic chase sends Kate a hundred years into the past, to a perilous, enchanted New York City. Searching for a way back to her brother and sister, she meets a mysterious boy whose fate is intricately—and dangerously—tied to her own.Meanwhile, Michael and Emma have set off to find the second of the Books of Beginning. A series of clues leads them into a hidden world where they must brave harsh polar storms, track down an ancient order of warriors, and confront terrible monsters. Will Michael and Emma find the legendary book of fire—and master its powers—before Kate is lost to them forever? Exciting, suspenseful, and brimming with humor and heart, the next installment of the bestselling Books of Beginning trilogy will lead Kate, Michael, and Emma closer to their family—and to the magic that could save, or destroy, them all.

My Thoughts...
The story of the Wibberly children is fascinating. Left to live in orphanages ever since they were little, abandoned by their parents, Kate, Michael and Emma believe that they'll soon be taken back. Their loving parents had sent them off for their own safety, and as they grow up, they form a close relationship with each other, their love for each other always in place. They'd had an adventure a few months ago, when they were transported back in time to Cambridge Falls. Kate had retrieved the Atlas and Dr. Pym, the wizard, had sent them back to their world. Kate knew it was a matter of time when they'd be on the run again, for the Dire Magnus knew about the children, and was hunting them down. A powerful force with evil aspirations, it was imperative that the Books be kept away from the Dire Magnus. 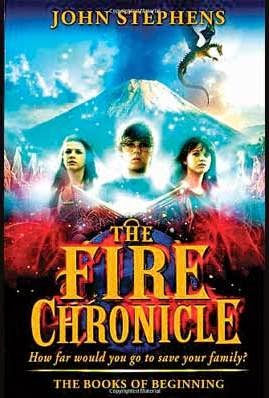 This is a story of what happens when the foul creatures of the Dire Magnus, the Screechers, come looking for the children in their newest orphanage and Kate is sent back to the time nearing The Separation, when the magical world officially closed off its contact with the human world and went into hiding. Michael and Emma are by themselves now, although rescued by Dr. Pym. Michael's destined to be the Keeper for the Chronicle and the story goes about finding the Book, meeting despicable creatures and breathtaking adventures on the way.

It's an interesting book and I particularly loved it for the 'magical' feel to it. It had been ages since I read something like this. The writing style is definitely something I'd applaud the author for. Apart from the story being gripping, the sequence set in a balanced way, I loved the writing style. Despite the seriousness of the situation, the author has beautifully included wit and humor at the appropriate places, making reading the book real fun. Such language not just adds to the reading experience but also helps character development implicitly. My favorite example for this would be the conversation between Michael and the dragon who is guarding the Chronicle. I mean, that's such a serious situation, and the next moment you learn so much more about the dragon and Michael! That's a brilliant and well-timed use of wit.

The characters were all properly developed, with hardly anyone missing something crucial about them. Even if it is the midst of a trilogy, you'd be able to assess the characters as appropriate information is provided, or implied, about them. Although at some points I did feel like there's been too much influence of Harry Potter: Dr. Pym seemingly like Dumbledore, for example, but it's been quite subtle and the story manages to stand for itself as a distinctive entity and not a reflection of its inspiration. I also love the whole idea of the book. It's pretty much interesting and as you read, it brings in different elements that make you keep thinking about the story and people even when you're not reading it. I quite liked Kate's part of the story as well, especially the mystery surrounding Rafe, the boy she meets when back in time.

The theme of a missing, separated family also surfaces in the book and has been included pretty well. The Fire Chronicle is a good read, recommended to children, teen, young adult readers and whoever else is interested in adventure and a 'complete' story.

Some quotes from the book I loved: :')
“The point of life isn't to avoid pain. The point of life is to be alive! To feel things. That means the good and the bad. There'll be pain. But also joy, and friendship and love. And it's worth it, believe me.”

Even though Wilamena was an elf, I loved loved loved her! -->
“He remembered the darkness and despair she'd suffered during her long years as a prisoner, but he also recalled the deep, unquenchable joy she took from the world around her; and he knew that given the choice, Wilamena would suffer all she had and more rather than sacrifice one day of being alive.

It was just as his father had said. She chose life, all of it.”