R.L. Stevenson's short book about a lawyer named Utterson feeling intrigued about his friend, Dr. Jekyll has been something I've always had a fascinating feeling for. Back to the days when I was a Children's Digest reader, I read this book's abridged version in one of the magazines. I was hooked on to the story. It was dark, intriguing, scary, mysterious and completely engrossing! Even years later when I came across the name, I had fond memories of the association I had, and wondered about the characters, before deciding to read the complete book.

I guess I've been quite lucky. Had I come across this title now, I might not have been too keen to read it excitedly, despite the blurb. I knew the story, having read it in a simpler language. The classic way of writing is obviously, 'classic', so it's mature and needs patience, which I have more in quantity now than before. Even though I'm not sure if I loved it as much as I did reading it back then, I still am in awe of the idea of the story. I initially believed it's purely science fiction, but there are a lot of other elements in the book. 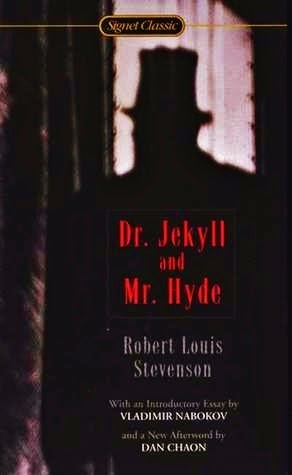 Utterson has reason to believe that his dear friend Dr. Jekyll might be in trouble or being blackmailed by a certain Mr. Hyde, someone who reeks of evil in his soul. Mr. Hyde is a sight of despair: short in stature, stout, with a face that dispels despair and negativity. He tries to investigate the probable reasons, taking help from their common friend Lanyon, before he himself is pulled into the mystery, a short while after Lanyon's death due to a sudden illness.

I love the story for its essence: the appeal of separating good and evil, the imagery of man as a being with a combination of characteristics and what perils playing with nature might affect those who try it. There's also a psychological aspect to it, as far as personalities are concerned. The book can also be seen as a parallel to understanding about split personality disorder (source: wikipedia), although personally I associate it with the former theme (probably because I happen to be a more philosophical person than psychological). More than anything, I love the kind of suspense it manages to create. The elaborate explanations are capable of leaving a reader breathless, although I guess the suspense vanishes in the first read and the subsequent ones might not be as exciting.

All in all, worth a read at least once in your life as a reader! :)
Check out these quotes from the book!

“Quiet minds cannot be perplexed or frightened but go on in fortune or misfortune at their own private pace, like a clock during a thunderstorm."

"With every day, and from both sides of my intelligence, the moral and the intellectual, I thus drew steadily nearer to the truth, by whose partial discovery I have been doomed to such a dreadful shipwreck: that man is not truly one, but truly two.”