on April 20, 2014
This is one book I don't feel like making a 'review' for. I'll just write about how it made me feel and what I think about it. Back when I had just started this blog, it was a wonderful experience being super-active, finding other bloggers from all parts of the world sharing the same love for books. During that time when a blogger friend put up a beautiful review for The Book Thief and personally also suggested to me to read it, I promptly put it up on my TBR. I wasn't so prompt in reading it, though. Two years later, recuperating from a dull-mood-cum-reading-slump, I finally picked it up and read it over a period of many days. Half of the book was read while travelling to and from college and the rest of it staying at home.

To say it's a beautiful book would be a stark understatement. In the world of books and stories, this one is definitely among the many good books ever written, but it's something that will leave a big impression on you and stay with you all the time. 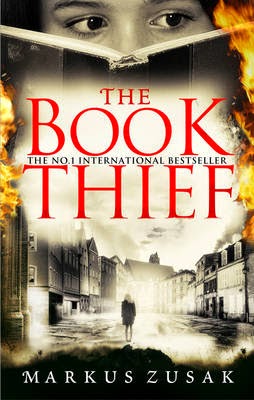 Leisel Meminger, 9, is going to Munich to her new foster parents with her brother, Werner. It's 1939, Germany under the rule of Hitler. She doesn't know her father's a communist and her mother's decided to leave them in someone else's care for a better life. Her brother doesn't make it through as he is greeted by death on the way. It's during his quick, unceremonious funeral ritual by the railway tracks that Leisel steals her first book, The Gravedigger's Handbook.

The book has a lot in terms of the story. Hitler, war times, school, friendships and live when your country's in a war. Air raids, seeing Jews being taken away, burning books. But it's not just this story. That's what struck me as the most beautiful part of this book. You'll never get enough of it in a single read. Narrated from the POV of death, the book tells a lot more about humanity, life, love and loss than it might otherwise have. It's all so beautifully engraved in the implicit meanings of those phrases narrated by death that if you could use your imagination, you would get the depth of meanings.


One of the central themes of the book is also one of my favorites: the power of words. Words are what Hitler used to turn the minds of people and words are what gave Leisel the meaning of life. She could not read at first when she reaches her foster parents, Hans and Rosa Hubermann. Hans, her new 'papa', is a loving accordion player and painter, who helps Leisel learn to read by staying up all night or whenever she needed to. His character is one of those gems you feel are too good to be staying in a war-affected world. Rosa has a big heart, but a fast mouth. She loves to call everyone Saukerl or Saumensch.

It's all profound, even though the story is about the everyday life and events of a German girl, living in a German household. The war and suffering was for all, not just the Jews and other countries Hitler invaded. It was for his own people too. Leisel's life gets a new meaning when they come in contact with a Jew. He further is able to tell her how words are life.

Then there's Rudy, the boy with hair the color of lemons: Leisel's best friend and confidante. Also, partner-in-crime for innocent stealing. However, books Leisel stole alone and for herself. Those books are comfort for her, the words she reads and later on writes are what save her. I cannot write about what happens in the story anymore, because like I said, this book is not just a story. It's a multitude of emotions, meaning of life and humanity and if you've read this book the way it should be read, you'd have learned some humility as well.

I've watched the movie adaptation twice and I say it for very few adaptations, but the movie is brilliant! The characters, the portrayal, the mood and tone of the movie is simply perfect. It's every bit as moving as the book. Recommended for: every single person, especially to remind everyone about the sufferings of war and what it is to be human, about the need to be loving and kind towards all.

"I wanted to tell the book thief many things, about beauty and brutality. But what could I tell her about those things that she didn't already know? I wanted to explain that I am constantly overestimating and underestimating the human race-that rarely do I ever simply estimate it. I wanted to ask her how the same thing could be so ugly and so glorious, and its words and stories so damning and brilliant."