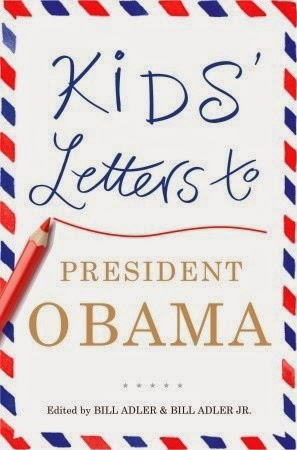 Did you know how excited and interested kids are about their Presidents? The first time I witnessed an example was having the opportunity to look through a room in Rashtrapati Bhawan (New Delhi) that held numerous, extremely crafty stuff kids had made for the President APJ Abdul Kalam in India. This book, Kids' Letters to President Obama was the second such example that would remind one of the strong beliefs and innocent trust little people have towards their leaders.

Bill Adler, one of the editors of the book had edited Kids' Letters to President Kennedy almost 50 years ago, when Kennedy was the President most adored by little children. This time Bill Adler, Jr joined him and considers this book as the one that gave him most joy while editing. The book contains letters that little kids have written to President Obama, in various formats, kreativ spelings, about different topics that form an important aspect of their little lives. And even my remark throughout the book was, 'how cutee!' I wouldn't restrict the review to just that.


It was an experience, looking at how amazingly creative kids can be with their ideas, how they believe in their leader and trust him to make America better, how they believe the President would be interested in knowing about their life, family, interests and concerns. The book is divided into sections, having categorized similar letters into distinct heads. Example, Chapter 1 is titled, "WOW, You're the President! You ROCK!' which has letters where kids (ranging from age 3 to 13 and not just from the US) expressed their happiness on Obama being elected President. The next section is Take my advice, Mr. President, where they've listed and suggested things the President could do to make the world a better place to live in. And believe me, these are no ordinary letters. You'd be amazed to see what kind of ideas these kiddies get, and they believe, genuinely, that the President should follow those.

My favorite section is Say Hi to your Daughters for me- and Mrs. Obama and Your Dog where the letters show how excited kids are to see the President having a family like their own living in the White House. While some wish for a playdate with Malia and Sasha, some want to play music for the President, some invite the First Family over to their place and many of them have suggestions for the breed of dog they should get. The best (and the cutest) thing is having a snapshot of these letters just as they were written (like in the picture above). It's fun to read a letter written by a small hand, with words in varying fonts, little sketches on the edges, and extremely creative spellings. (Who would've thought 'conchrey' would be country? Or California could also be spelled as 'Calafornya'?)

All in all, it's a delightful read! I'm not sure if it's something you would like to read in one go, though. It's more like a bedside table book: pick it up whenever you feel like, open it from any page and just read a few letters. It's very warm, optimism-inducing and would make you smile each time you pick it up! Recommended for .... everyone, I suppose. Especially if you're looking for a fun, light read. :)