Meet the clique that rules Fidelity High: Olivia, Zelda, Nordica, and Shelly, each one handpicked by über-popular Hamilton Best. You know you're "in" when you make the guest list for one of Hamilton's parties. And in the thralls of senior year, everyone wants to get noticed by Hamilton.

But Hamilton's elite entourage is coming apart at the seams. Olivia fantasizes about finally having a boyfriend, Zelda dreams of ditching high school, Nordica wants to be alone with her photography, and Shelly's plotting to dethrone Hamilton. Lies and secrets are ripping away the careful ties that have kept them together for years. But Hamilton has the biggest secret of all, one that only her boyfriend Alex knows. If the truth got out, it would shock everyone and destroy Hamilton's fragile world—and she'll do anything to protect her secret and keep her clique together.

My Thoughts!
Popular caught my attention as a refresher book that I could do with. I had been reading a lot of 'heavy' books and this seemed like your average, typical high-school clique-ish, girly novel. A quickie fix for your too-much-emotional syndrome. A reminiscence of your past, when you read a lot of high school-ish books. It was good to read this one. I was rescued from the boring life of traveling in the metro trains to college without having anything to do, because I read Popular on my daily-travels-to-college trips. The first part of the book is titled, "The Clique" and each chapter is from the point of view of a different person, part of Hamilton's clique. Hamilton is like the queen bee in high school, lately more worried about graduation as it would be the end of the life she had built for herself. Fidelity High wasn't just a school for her, but a castle she made for herself. She was respected and loved. 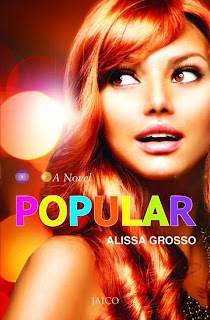 The other members of the clique were special, hand-picked by Hamilton herself. Each of those girls is different when it comes to personality. Shelly's too arrogant and hates Hamilton, Olivia, Hamilton's friend since kindergarten, is trying to over throw her, Nordica doesn't want to be part of the clique anymore, Zelda wants to ditch high school completely. The story goes about describing the final year of high school and all that happens in school, shown from different POVs. It seems like a story about the clique. Then there's Alex, Hamilton's boyfriend who's just surprised and amazed that Hamilton picked him for her boyfriend. Now, as the story progresses and after the initial few chapters when we're introduced to the different members, it tends to get a bit conflicting. Alex seems to be staying not just with Hamilton, but worried about other members of the clique too, which made me judge Alex quite harshly. Hamilton seemed to love him and depend on him so much, so what did he think he was doing? Fooling around with his girlfriend's best friends?

With frequent changes in POVs, it also gets a bit confusing, if you don't recall all names easily. It's easy to get muddled up and hard to get accustomed to the style of writing. The writing is clear, no doubt. It even has an element of attraction to it, you really want to know what's going on, even if you might have been bored with whatever happened so far. It's interesting that way. I'd be honest. Up until 200 pages, I was deeply in Fidelity High's life, reading like a naive reader, not focusing on details and just shooing away little irritations which were actually hints, hinting about something big. Turns out this isn't just a high school story after all. When the first weird thing, instead of happening on the sidelines, happens right in your face, you're left with an open, astounded mouth, wondering what the hell ever happened. I think this book has the biggest weirdest twist I have ever read and if you're not the kind to read high school stories, just this twist might make it worth your time.

Part 2 is from Alex's point-of-view, gradually divulging the details about Hamilton's life, the past and everything as Alex saw it. The reality. It is mind-numbing and definitely makes you like the book a hell lot more. If you were bored with the cat-fights and bringing-each-other-down till the bomb-ish twist, you'd be happy you got so far. After the twist, there was no backing off, no waiting to read it on the train journeys. I read it sitting in college, oblivious to everyone chattering around, and then at home, comfortably under the covers. I'd call it a beautiful book. Alright, you'll get that feeling only after the first half, but still. Also, if you're anyway looking for a light read or are fond of high school based stories, you'd like this one all the more. The descriptions are actually different. Not too many details about the main characters' families, only focusing on their feelings and actions. The way the POVs were separate might be troubling you, but you'd easily forgive that because that's the essence of the book. ^_^

It's the kind of book that people would read mostly because of the big secret, which I can't and won't divulge. I can say it'd be worth it! If you read this and love it too, let me know! :) Leaving with some lines I marked from the book:

'People are so much more fun when they're uninhibited'

'In general, people can be pretty boring. That's not politically correct to say, but it's true. A person can be cute and funny and all, but after a while you're going to get bored, wondering if there's someone else who's cuter and funnier and just different. Boredom is the number one killer of relationships. Maybe true love is simply finding that one person who never stops being interesting to you'

Thank you Jaico publishers for a copy of this book! :)