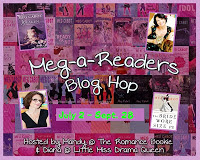 This post is part of the Meg-a-Readers blog hop, hosted by Mandy at The Romance Bookie and Diana at Little Miss Drama Queen to celebrate Meg Cabot's two new releases! Awaken, the third book in the Abandon trilogy and another Heather Wells book, Size 12 is the New Black! For this post I've decided to mention some characters from the Meg Cabot books I've read and what I could learn from their personalities and behavior! ;) 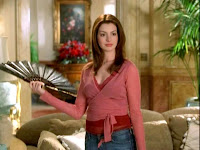 1. Mia Thermopolis (Princess Diaries series): You know how they say, some characters stay with you long after you've read a book? I haven't read all books in The Princess Diaries series. I started reading them late and I just didn't get to all of them, but I have always been in love with Amelia's character. For one, she is portrayed as just another ordinary girl (with the minor defect of her being a princess, yes) who has to deal with the usual high school problems. I could probably relate to her more because of my own inherent ability of being a klutz during all my waking moments, but I'm sure even for normal people, she's pretty much relate-able.


Thinking of her character constantly reminds me to:
- Not bite my fingernails. Even fake ones.
- Not stare at a guy's lips, because your 'boyfriend' can possibly notice you noticing the other person's lips (not that I have a boyfriend, but still. Anyone observant enough can notice).
- Always wear nice pajamas during a sleepover.
- Be brave enough to refuse what you don't want to do, unless you're being threatened by a possible cousin who wants your throne.
- Pick up intelligent sounding words from smart friends like Lilly, and later look them up to improve your vocab.
- Be courteous to everyone, especially maids of honor. ;)
- Always smile. :)

2. Lilly Moscovitz (Princess Diaries series): Although she's the character opposite to how I could ever be, she did inspire me to:
- Speak my own thoughts without caring about what the rest of the population would think.
- Start using intelligent sounding words, because they can totally make your best friends think around in circles.
-  Have your own 'thing', something you regularly contribute to, like she has her own cable access TV show. I have my book blog. It kind of comes close. Okay it doesn't, but still. It's my 'thing'. ;)
- Be smart enough to guess whether or not your best friend is lying about their PMS status. Their crankiness could be a result of something really major. 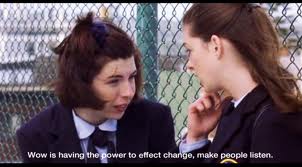 3. Michael Moscovitz (Princess Diaries series): What isn't there to learn from this guy?
- Work for quirky magazines like Crackhead.
- Play End of the World with sister's best friend, who happens to have a forever crush on you.
- Tell the aforementioned sister's best friend you love her too, through a cheesy poem flashing on the screen of a computer when she's trying to test your computer during the school fair.
- Love your crush's pet.
4. Heather Wells (Heather Wells series): When I read about her saying Size 12 is the size of the average American woman and one should not refer to size anyway, I loved her! Heather taught me to:
- Not believe in college kids' lame excuses for covering up dumb things and the mess they created.
- Having sugar-coated snacks everyday, even after wondering if it's not contributing to your size.
- Being independent, strong, and acting on intuition.
- Imagining yourself getting together with the guy you secretly love. Positive thinking makes it true.
- Keeping jealousy out of your mind when solving a suspicious case.

5. Cooper Cartwright (Heather Wells series): I might be biased here, because Cooper Cartwright is my biggest fictional crush.
- Stay calm in all situations. Even if it involves a death dormitory and your brother's ex.
- Don't give more than a passing glance to all girls, like creeps do. Keep your attitude, it makes you sexier.
- Keep details of work a secret even from your in-home accountant. Mysteriousness is a characteristic that makes you more appealing. ;)
- Get together with brother's ex, who secretly loves you too!
- Follow your heart. Don't stick with family businesses if you think it's not your thing and you want to be a private investigator. Love your grandad, you don't know, he might leave you his brownstone apartment.

5. Jean Honeychurch (Jinx): I like this clumsy girl, nicknamed 'Jinx' because she happens to bring bad luck (she doesn't).
- Self-confidence and will power.
- Not letting annoying and jealous cousins ruin your friendships.
- Always clearing a misunderstanding.
- Being brave and believing in witchcraft, however esoteric it might be.

6. Emerson Watts (Airhead trilogy): When you know you're not the girl everyone thinks you are, when you know your friends and the love of your life believe you to be dead, when you suspect a secret racket behind all the mysterious happenings and you still gotta cope with it and model on, I think you're really brave!
- Ordering banana splits whenever you or your friend feel low.
- Trying to control yourself seeing your love feeling angry and depressed and not being able to do anything about it.
- Putting self-obsessed people in their right place by putting their limo on fire.
- Never giving up on family.
- Making full use of technological devices when in a tight situation. They might be life-saving.

I also wish to include Sam Madison from All American Girl who is one girl whose confidence is worth applauding. She's also one for standing up for herself and the truth. Pierce Olivera is a fighter, Tina Hakim Baba reads during lunch too, John Hayden is so persistent! Basically, I love all Meg Cabot characters, but these are those that stay with me. Which ones do you like? :)