Review: The Affair by Lee Child

Goodreads blurb!
Everything starts somewhere. . . .For elite military cop Jack Reacher, that somewhere was Carter Crossing, Mississippi, way back in 1997. A lonely railroad track. A crime scene. A cover up. A young woman is dead, and solid evidence points to a soldier at a nearby military base. But that soldier has powerful friends in Washington. Reacher is ordered undercover—to find out everything he can, to control the local police, and then to vanish. Reacher is a good soldier. But when he gets to Carter Crossing, he finds layers no one saw coming, and the investigation spins out of control. Local sheriff Elizabeth Deveraux has a thirst for justice—and an appetite for secrets. Uncertain they can trust one another, Reacher and Deveraux reluctantly join forces. Reacher works to uncover the truth, while others try to bury it forever. The conspiracy threatens to shatter his faith in his mission, and turn him into a man to be feared.

My thoughts!
If I had ever thought wished to read a thriller that would make my breaths short and force my eyes not to close till the very end, I must have been imagining the kind of feeling you get if you read The Affair. Just a perfect kind of a thriller, this book is based six months prior to the setting of Killing Floor where Jack Reacher finds himself posted in Mississippi, just to keep a 'lookout' and inform the base about any weird activity. Reacher is one solid man with numerous physical combat moves ready at the drop of a hat, with immense precision and guts, and a head full of knowledge, analytical skills and an uncanny ability to judge people and their actions. Just the right kind of an investigator you'd prefer. With a military background, Reacher is adequately experienced and equipped, which makes the book a whole lot fun and interesting, as the readers get to know experience total military/investigative action as close as real could get! 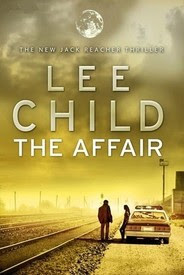 Unlike in Killing Floor, this time I could make out Reacher's personality much better, which made it easy to imagine him doing whatever he was doing. Elizabeth Deveraux, the sheriff is a very smart woman, the no-nonsense types, extremely pretty and stuck with three homicides, the investigation of which is going nowhere. I really liked the way Deveraux was presented: slightly unpredictable. As the seed of doubt is sown in the story, you're not sure which side the decision would go. Who's the real guilty party? Who's faking? As an eager reader, I usually anticipate in advance what the outcome would be and then it's up to the rest of the story to either tell me if I'm right or wrong (which, by the way, is more thrilling!). In this book however, you might have to make a hard choice, if you decide to predict the outcome like I do. You might be oscillating back and forth on your opinion, and not just once. That's what's great about thrillers and mysteries, no? Unpredictability! The Affair meets this criteria very well!

As far as the story/plot goes, cent per cent marks! Though initially when the setting changed it got a bit confusing, but it didn't go beyond more than 20-30 pages. When Reacher's in Mississippi and the story begins, it's a total 'oh-my-god-what's-happening-I-can't-stop-reading' kind of a thing. There are murders, there are suspects, new interesting and sometimes startling facts come up, most chapters end on a suspense-kind note, so that it's hard to 'just read another chapter'. I loved the plot twists, all of them! The ending seemed just right. Reacher's intuition and that secretive information and feeling that is revealed only at the end, is quite promising. I wasn't disappointed! The only thing I hoped was that the 'end' end would have covered a few more pages, as it seemed a little bit rushed up. The fact that people accepted their fates easily, as if either they knew all along it was coming, or they're just like that: they wouldn't put on a great emotional show. Whatever it was, it seemed good enough to me!

The writing style is great, full proper sentences ;) The best part is how the author is able to inculcate important general facts without making it seem like an information overload. I love such books, learning-the-fun-way types. The descriptive aspect is great. Much better than great, if I may say so. I think that's mostly because Reacher is that kind of a guy who has a complete mental clock and calculator inside of him, and all that is right on paper. Overall, a great suspense thriller that would keep you on edge most of the times, and so gripping that you're surely going to bite off all your nails! ;)

Some quotes from the book I loved and saved:

"Sometimes if you want to know for sure whether the stove is hot, the only way to find out is to touch it"

"Smart, conscientious people hate making mistakes. Not just because of ego. Because mistakes of a certain type have the kinds of consequences that people with conscience don't like to live with"

"Blood and brains are realities, and realities are unwelcome visitors in the world of make-believe"

"For years you've laughed off the small things, but they come so thick and fast that eventually you realize an avalanche is made up of small things. Snowflakes, right? Things don't get much smaller than that. Suddenly you realize that small things are big things"

Recommended for: Crime fiction/mystery/suspense lovers, Adults (it's got some gory descriptions of the murders and a couple of intimate scenes)