Blurb from the book's cover!
It's the blazing hot summer of 1976 and Adrea and Evan have just started working in a north London care home. Their days are spent nursing an eclectic group of residents and dodging Matron and her twisted entourage, and their evenings reverberate to the loud, shouty sounds of the new punk rock- and to the shock of first love. As the heat rises on the streets, so does the intensity of their feelings, with inexorable, incendiary consequences...

My thoughts!
Set in the city of London, in the alleys and corners less talked about, Eternity is Temporary is, what I would call, a deep reflection of human psychology, bringing openly the thoughts and activities one usually doesn't put down in a book. It's totally descriptive, discussing at length the feelings, thoughts, insecurities, delving deep into the mind, about every character for every thing that's relevant to them. There isn't, as such, a long plot or a story. There is one base story, a guy called Evan is acquainted with a weird couple in a bar in London (which happens to be run by a midget), and he agrees on a job at Heron Close, a care home for old people who're either afflicted with physical or mental problems. There he meets Adrea and they fall in love. The story goes on how all residents at Heron Close and everyone else: the Matron, caretakers, cooks, cleaners and helpers, etc are living, going in details about most of them and their stories, their past and their troubles. It shows how Evan and Adrea, with renewed enthusiasm, try to bring in pleasant changes in the home, for the benefit of the residents and how it goes on great for a while before settling back and going off after a while. 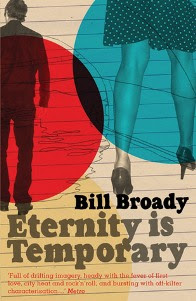 The best thing about this book is the descriptive aspect and the frank way with which it brings out everything about the characters and their lives. It's not biased towards anyone, just sort of gives a factual description of everything. It's not too factual, though. When it talks about the conflicting emotions of a character, it is able to invoke a feeling of connected-ness. It's like you've just been to that place and lived there, with all those people and seen everything that happened, first hand. Not many books give you that feeling. I guess that's the way it was meant to be: describing a whole small world to the readers, in a totally complete sense. You can picture the characters, the care home, the bars, the railway tracks, the punk rock concerts and everything. There's a lot of music and rock band-talks in the book, considering a lot of characters like music. That was something that maybe, added a little bit of 'color' to the book. For me, the writing style was flawless and there were numerous lines and phrases where it became humorous!

This is the kind of book that's not really "my" type and so I definitely had a bit to struggle with. For starters, I wasn't into the book until at least a 100 pages went by. It was then that it started looking a bit promising. As the story involves bars, a care home managed by really weird people with their own set of problems, the residents and some mean people who're nothing short of depressed and leading a lonely life, there wasn't much that was "bright and light" in this book. So it might seem depressing, just talking about troubles and vivid details of desires, wants and imagination. It definitely became interesting in between but I was slightly disappointed by the way certain characters simply vanished from the story. And no, I did not like the end. Which personally means a lot to me.

Nevertheless, I liked the meaning behind all of this. There's a painting in the care home where there's an inscription that says, 'Eternity is Temporary'. That's the whole idea of the book, according to what I inferred. When Evan and Adrea are so much in love, enjoying the close moments, looking and admiring beautiful things and memories together, and when things are going breezy at Heron Close, it seems like it should go on forever, it seems like eternity. However, gradually and due to certain situations, things go back to the way they were and what happens to Evan and Adrea is something I'm not spilling. Let's just say it simply lives up to the title and shows it's true: Eternity IS Temporary. Some lines from the book I liked:

'We're like those people in your picture'- Adrea gestured towards Eternity is Temporary- 'They know they're in the right place but they don't know what to do next. They've discovered that eternity is temporary but they don't know what difference that makes. All they can do is sit and wait. Like us. We're ready to go and we're just one step away from something remarkable'.

Recommended for: Adults, experimental readers and those who love a lot of descriptions!


Thank you Random House publishers for this book!