From the Book’s cover
Love-hate-jealousy-admiration-amity-animosity-friendship-enmity- for people in general may be only words, but for eighteen year old Abhishek Banerjee these words turned out to be life-changing experiences over the next five years.

He harboured dreams of studying in a good college, to make new friends there, to have a girl by his side as his girlfriend, and above all, to carve out a niche for himself and leave his mark. He started realizing his dreams when he got selected to study in the Animus Law School, one of the premier private law schools of the country. But, on the very first day he realized that Lady Luck was not on his side.

Could he make new friends as he had yearned for? Did he meet and get the girl he dreamt of? Was he able to make his mark? If no, then why not? If yes, the how?

My Thoughts
I found this book to be a fun read. As the author himself points out, there are contemporary Indian authors who’ve been to engineering and management institutes but we haven’t really heard of those with a degree in law. Abhishek Bose is a student at ICFAI University Law School in Dehradun and his book is all about the five college years of the protagonist, Abhishek Banerjee’s life.

The first thing I felt good about is the story. It’s actually a very interesting one, especially about how Abhishek bumps into a girl first day in college and falls in love with her. The girl however, is furious and after a series of pitiful misunderstandings, she hates Abhishek like anything. The story revolves around Abhishek and his group of friends who call themselves the ‘DU’ (for ‘Diversity Unified’), as they do what all college students undertake during those years. They have fun, mess around, participate in competitions, do their internships, crush over people, perform like geniuses or like total nutcases, get appreciated or get reprimanded and try to win over their respective ‘loves’. If you just see the story, it’s interesting and funny and something we can all relate to. 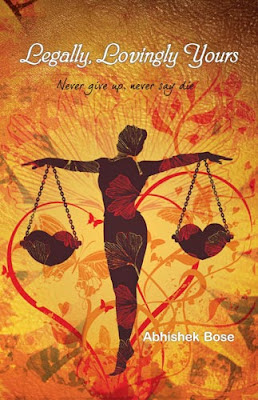 Initially I was hesitant about this book, particularly because one, I usually don’t read contemporary Indian authors and two, I’m not very fond of love stories. But my experience with this book was better than I had expected it to be, though I do have some (personal) qualms about it.

Coming to characters, Abhishek is a smart one, he’s a great speaker and orator, intelligent, wins a lot of competitions (and people) and an honest, sincere guy. At some parts however, he comes across as someone who’s clueless about stuff, especially some things related to Lavanya, the girl of his dreams. While reading you know what’s happening and it’s actually obvious, but when Abhishek shakes his head, you feel like, ‘Oh God, how can anyone not know?’ That was the only thing about the protagonist that I didn’t much enjoy. The other characters were pretty much in the story but the readers couldn’t connect to them as well as with Abhishek because we didn’t have adequate background about them.  The second thing I thought could have improved the book is descriptions. In some places it was good, but in others, we were moving in and out from different scenes very quickly. But then, as this book’s a light read, it’s not a big issue. The story’s good anyway! ;)

The message that this book puts across is that one should have a ‘never-say-die’ spirit, as shown by Abhishek who takes on all sorts of challenges imposed by default or by deliberate action by others and with this will-power, he pretty much overcomes the inhibitions. There are all sorts of experiences evenly balanced out, so you don’t feel too influenced by either the positive emotions or the negative ones. The writing style is quite simple, very simple, if I put it bluntly. This opinion may however, be influenced by the fact that I’m not used to reading these light books. For those who do enjoy such reads would find it easy and good! Overall, it’s a fun, light read and recommended for those who like reading Indian contemporary authors with stories about life and love and college!