Stories surround us. Stories about people like us who make difficult and often complex choices that sometimes astound us. You must have come across some people in your own life who closely resemble the characters in these stories. Maybe you have gone through trying moments in your life too. For instance, have you ever been bugged enough with your partner to want to leave? Have you ever had to choose between love and money? Have you ever had to compete with your partner? Have you ever felt that your family weighs you down when it comes to choosing your partner? At times like these, havent you wished that things happened differently and that you could change how they ended? Now you will control how the stories in this book end.

Each story centres on the life of an urban middle class character caught in a set of circumstances beyond his or her control. A Hindu girl living in with a Muslim boy is suddenly in the glare of global media in a reality TV show, a divorced cynical man faces the prospect of committing himself to a prostitute, a highly talented small town girl must choose between life and death. All must resolve the conflicts within their beliefs. Read the way the stories end in the book, but if you dont agree with the ending, visit the website riturajverma.com for alternate endings. If you dont like the way the stories end there either, write your own, and if your ending is selected, see it in print in the next print run with your name in the acknowledgements. Hoping to change the world, one story at a time. 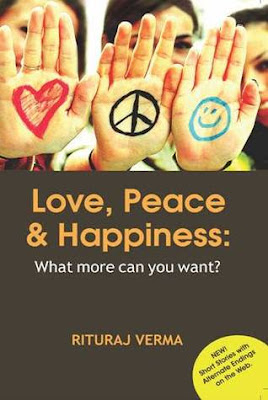 Love, Peace and Happiness is a collection of 9 short stories that explore in depth the lives of urban Indians, different people from different backgrounds, having different stories. The unique aspect of this book is that readers have the choice to change the endings of the stories and go with the ones they find more interesting. No, it isn't like those mystery books where you're given a couple of options as page numbers to choose from, and take the story wherever you want. Rather, you have a couple of urls given at the end of each story. You just need to follow the links (on the author's website), read the alternate endings and if you're not happy with even those, you can write your own! I've just seen one alternate ending for the one story I totally loved and found the alternate one better, somehow!

The best thing about these stories is the depth with which the author has explored the human psyche, of those living a middle class urban life, the problems they face, the emotional dilemmas brought out due to their personal or societal beliefs, the aspirations of those who find themselves caught in the web of social norms and practices, feelings and lives of men and women, rich and poor, happy and unhappy. As is written in the book's 'Introduction' and author notes, the author certainly has spent a great deal of thought and time on understanding people and that's the reason the stories are quite realistic. You know it happens, you've maybe seen something familiar or even been in the midst of something like it. The point is, if you're an urban Indian, you'd know and you'd like reading these stories.

The stories I personally enjoyed more include:
- A high, like heaven: It explores the details of the lives of a couple recently married, who go for a mountain trek in the Himalayas (and no, this opinion isn't biased based on my personal love for the Himalayas, but because the descriptions, which I find extremely important, were really good!). The husband's obsessed with the idea of finding a certain flower in the mountains and carries on ruthlessly without caring for what his wife wants or even the guide, for that matter. The wife's emotions, the husband's ruthlessness are not just stated, you get to understand it from the text and that's why I think it's so well written!

- The intimacy of space: About a couple in a five year old live-in relationship, this is the story of a Hindu girl and a Muslim boy, who decide to take part in a reality TV show organized by BBC as part of some research work. The girl as it is, finds the boy quite dominating as he denies her her freedom in a lot of ways. During the reality show, there's a lot of emotional turmoil and the girl understands that it's not in her best interests that she stay with the guy. I liked the way the reality show turned the story inside out!

- The practitioner of austerity: If I can be blunt, I'd say this one is the best story in this book and definitely worth a read! It explains the very practical and real dilemma of a girl born poor, but determined to do something to end the poverty at home. With many siblings and elders to take care of, she manages school and at the end, cracks the Civil Services exam! However, it's never been easy for her. With fights among siblings, conflicting interests, low finances, there are problems not just with the protagonist, Aparna, but also with her family members. She's faced with a huge emotional dilemma when she's offered marriage by the man who loves her (and she too, loves him back), but she chooses to stay with her family and help them live. She believes they need her more. The ending here wasn't exactly joyous and that's why I looked up one alternate ending and found that it was much better! (Though, shorter than I would have wanted).

Later in the stories, to my surprise, I found them as extended stories to the ones that were there before. That had both, a positive effect (as we got to know even more about them and the way their lives were after the initial story ends) and a negative effect (when they picked up after many years -where the previous story ends and there it was a bit tedious to make the connection). Nevertheless, it's a new kind of a book and kind of refreshing too. The primary message that comes out of the stories is how satisfied you are in your life. You need love, you need peace and you aim for happiness. The stories revolve around these three things and  explain how different people strive for different things! Can be read while traveling and stuff, as it's a light read!

Sometimes I thought the endings were abrupt, as it wasn't written as much in depth as the rest of the story was. Maybe that was because of the alternate ending thing? That's what I felt was missing. Then there were a couple of stories I didn't enjoy as much as the ones I've mentioned, but that may totally be because I'm not usually reading those kinds of stories. As the author says, different readers would read the book differently! I wouldn't complain about the writing style, it's really good! It's detailed, it's easy to understand, it's a light read and it's quite descriptive. All good!

Recommended for: Short story lovers, fans of contemporary Indian authors.
This book was received for review.