When I found this book in the library, I thought I’d heard/read about it somewhere. As much as the title seemed non-explanatory and I had no clue what would be inside (apart from what I inferred from the description, of course), I thought I had to read this one. There was a kind of pull that led me to have it in my hand. And I’m grateful to whatever it was, because I found a gem. A big, real one. Something that’s going to stay inside my head for a long time to come!

From the book cover
At the age of nine, Finnikin is warned by the Gods that he must sacrifice a pound of flesh to save his kingdom. He stands on the rock of the three wonders with his friend Prince Balthazar and Balthazar’s cousin, Lucian, and together they mix their blood to safeguard Lumatere. But all safety is shattered during the five days of the unspeakable, when the king and queen and their children are brutally murdered in the palace. An impostor seizes the throne, a curse binds all who remain inside Lumatere’s walls, and those who escape are left to roam the land as exiles, dying by the thousands in fever camps.

Ten years later, Finnikin is summoned by another rock- to meet Evanjalin, a young novice with a startling claim: Balthazar, heir to the throne of Lumatere, is alive. This arrogant young woman claims she’ll lead Finnikin and his mentor, Sir Topher, to the prince. Instead, her leadership points them perilously toward home. Does Finnikin dare believe that Lumatere might one day rise united? Evanjalin is not what she seems, and the startling truth will test Finnikin’s faith not only in her but in all he knows to be true about himself and his destiny. In a bold departure from her acclaimed contemporary novels, Printz Medalist Melina Marchetta has crafted an epic fantasy of ancient magic, feudal intrigue, romance and bloodshed that will rivet you from the first page.

My thoughts
On the book
There are some books that you can read through in a go, they’re light and you can easily flow along with the characters, then there are those that you like so much that you read them slow for fear of missing out on anything. Superior to these are those books that have the power to make you deliberately read slowly because they have so much to offer that you can’t just finish them in a go. You read them real slow because you want every word to make sense, every situation to stay in your head for future reference and every such moment that leaves you breathless, literally. You want to forget the world and live inside their world, for fear of leaving out or not making sense of a word or a phrase that can be instrumental in the story. Finnikin of the Rock is one such book. ‘Unputdownable’, yet you don’t want to spoil the fun by finishing it fast! 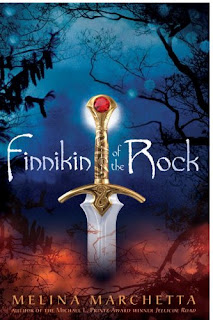 I’ve always been attracted to stories of royalty. Of kings and queens and their kingdoms and enemies, of how they train, how they fight, how they feel towards their kingdom and their people and how they live. This book was all about it, though not about the pretty picture of royal ensembles and courtesies, but about the hearts of those who love their kingdom and what they can do to bring their people back to their kingdom and help them live the wonderful lives free of misery they lived before the war. Lumatere was a happy kingdom with a wonderful king and queen, a prince Balthazar, three princesses, the king’s Guard and all noblemen, all Lumaterans living happy and peaceful lives, until the day the king’s cousin turned into an impostor king and took over his kingdom by killing the people in the palace and the Lumaterans.

I loved the story, the strength of all characters, the way the book’s written, with descriptions where they are required, the mystery surrounding the novices and the curse of the witch, Serranonna. Moreover I loved the way it ended. It isn’t like your average everyday reading book. It’s almost a classic in the way it’s been written. I really admire Melina Marchetta for the way she’s weaved a wonderful story and kept the readers hooked to her book!

On the characters
It would be wrong to point out a single character as a favourite because all of them were portrayed wonderfully, even the small, supporting characters. Finnikin was strong, aggressive and filled with love for his people. However, he’s also riding on a guilt about the way he thought as a kid. He feels the kingdom perished because of a little thing he wished gone wrong (though that’s not the case). He’s not seen his father since the past ten years because Trevanion had been a prisoner in the mines of Sorel and this, along with losing two of his best childhood companions and the beloved kingdom itself, made him hard and disbelieving in miracles or happiness. He’s seen his fellow Lumaterans as exiles living in pathetic conditions which adds to the hatred he feels for the impostors. There should be someone who could make him see reason, give him hope that their kingdom can survive, not by relocating every Lumateran to some other piece of land as he wanted, but in their old home again. That’s where a novice of Sagrami, Evanjalin comes in.

Evanjalin is by far my most favourite character. She’s immensely strong, persuasive, intelligent (sometimes reminded me of Hermione!), knowledgeable and being led by her thirst for her people and her kingdom. She’s grateful and helpful, keeps relevant secrets, knows how to fight and how to control those around her. I simply LOVED her, especially during the ending. There was something about Evanjalin that was mysterious and being the curious reader that I am, I jumped to a conclusion about her. And I was THRILLED to know towards the end, that I was right! Yay!

Trevanion is a fighter and fiercely protective for his son and I loved this about him. Sir Topher, being Finnikin’s mentor since his father was arrested, was wise, knew Finnikin in and out and used this knowledge to get him the desire to return to Lumatere, along with Evanjalin. Froi, the thief is a lost soul with no one who owns him and the way he’s been described is utterly believable. Well, that’s the whole thing in the book! Like author Kristin Cashore says in her ‘Praise for Finnikin of the Rock’, there’s fantasy and there’s realism’. It’s a difficult book, one of those you have to read more than once in order to fully understand the depth of the things it talks about. And that, in my definition, is the work of an awesome author! Needless to say, I loved every single bit of it! :D And it is worth a purchase!

Then, why is my rating 4.5 instead of a full 5? The reasons:
Once I began with it, I guess I stopped after one chapter. It was difficult to understand what’s happening, especially with the long names of characters and places. We didn’t have any sort of background info on the characters and the book began with two of them conversing and travelling, so it was hard to stick to it and read without understanding everything. But I made myself read through the second chapter and then it was easy. Then it was hard to put down!

The second reason is, there’s a lot of darkness. Deaths, torture, talks of unspeakable things done to the people, a lot of it, and for this reason I think it’s better suited for mature readers and not young teens. If you’re comfortable with the gory details, you should read this book! :D

Quotable Quotes
Lines from the book I fell in love with:

‘Without our language, we have lost ourselves. Who are we without our words?’

‘The Gods do make playthings of us, but we provide them with the tools’

‘Be prepared for the worst, for it lives next door to the best’

‘Circumstances present themselves and at times we have no choice’

‘But at such times (terrible times), you grab at any sign of hope. You grab it with both hands and breathe life into it, day after day. You do anything to keep it alive.’

‘Somehow, even in the worst of times, the tiniest fragments of good survive. It was the grip with which one held those fragments that counted.’

Recommended for: Young adult and adult readers and those who like stories of kingdoms and their lost heirs.
Author- Melina Marchetta Fantasy Fiction My favorites Recommended readings Young Adult