Run Away by Harlan Coben

on March 31, 2020
It's been a while since I last enjoyed a Harlan Coben book, but I have always enjoyed anything Coben writes (Fool Me Once, for example). Run Away was an absolute thrill to read - exactly what I expect from a gripping mystery to provide. 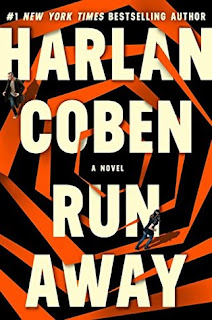 Simon has been looking for his estranged (more like lost) daughter Paige, who had a fairly decent childhood until she left for college and got herself an abusive boyfriend Aaron. When a neighbour lets Simon know he "might" have spotted Paige at Central Park busking for money, Simon is pained and stunned to find out that the frail, poor girl he sees is indeed his daughter. But right before he can confidently get her away to safety, Aaron steps in and Paige runs away with him.

The story follows Simon's hunt for his daughter as he tracks down her old classmates and tries to piece together things he never knew about Paige. I found Run Away having a mix of murder-mystery and family relationships - the recipe for a compelling read that makes you feel things. I could understand Simon's frustration and helplessness as we learn more about the family, Paige's nature and the little details that shape our relationships and personalities.

Simon's wife Ingrid is a strong woman with a mind of her own, and I quite liked her from the beginning, even though to Simon she seems to have let Paige run away. There's an air of mystery around her which intensifies when a drug dealer shoots her when they both go looking for Paige in the drug den she was supposed to frequent. We also meet other characters in a side-storyline - paid assassins whose targets make no sense until towards the end. Now that I think about it, the alternative stories going back and forth somewhat broke a momentum as they didn't seem to be linked that much in the beginning. Nevertheless, the writing was gripping and fast-paced, and both storylines were pacing well.

I'm also not sure what I feel about the supporting character Cornelius - he was there and served a strong purpose but he was also very conveniently coming and going when Simon or us, the readers, needed useful information about Paige. The ending, though!! I liked how the suspense builds up and unravels slowly, not in a rush, putting the pieces of the puzzle together and leads to a shocking ending! It made me whoop and suffer a shock at the same time. I am very happy with the ending, indeed.

I would surely recommend giving this a read if you're looking for something fast-paced and relatively light. It's not too heavy on the head like some of the recent psychological thrillers I've read lately. It can get quite fun, too. If you've read this already, share your thoughts! What do you think?