Review: George and the Unbreakable Code

Goodreads Blurb!
George and his best friend Annie haven't had any space adventures for a while and they're missing the excitement. But not for long . . .

Seriously strange things start happening. Banks are handing out free money; supermarkets can't charge for their produce so people are getting free food; and aircraft are refusing to fly. It looks like the world's biggest and best computers have all been hacked.

George and Annie will travel further into space than ever before in order to find out who is behind it.

My Thoughts!
Eleven year old George is sure that he loves machines more than people. Except perhaps his family, however annoying they might be, and best friend Annie. In this fourth book on space adventures, George and Annie are facing a world that has suddenly gone berserk! Banks are showering money on people, supermarkets aren’t charging for food, airlines are giving free air tickets and people are swarming in groups, looting whatever of value has remained. In such dire circumstances, Annie’s scientist dad has been called by the national authority to look into the matter and it is up to George and Annie to find out who’s behind this crazy, humungous hacking scheme. Their theory and ideas lead them into another trip(s) to space using their dad’s supercomputer, Cosmos. But wait, if all the computers in the world are malfunctioning, how could Cosmos have been spared? It’s suddenly dangerous to trust even their beloved computer. 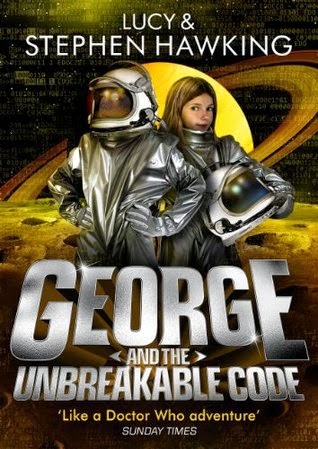 George and the Unbreakable Code is about science. Kids who love science and readers who’d love to read about make-believe, but informative, adventures around science. The illustrations add fun and interest to the text, totally supporting the story. One of the unique things about this book would be the pages of factual information on different science topics, inserted in between the story at relevant pages. If in the story, a robot android is introduced, you’d find a few pages of factual data of interested related to androids. You’d also find computers, algorithms, Jupiter and Saturn and their moons, our Earth’s moon, stars, Boltzmann brains and 3D printing. Although initially I thought it’d perhaps be breaking the flow of the story, but I guess it did the opposite. Not only was it informative, but also presented in an easy to understand language, which, for a young reader, might help develop a keen interest in science.

I mean, it speaks of topics we hear about, but hardly bother to know in detail. Knowledge is important. It is capable of making one develop an interest in something, and even though my field of education and work is far from science, it was a pleasure to read it. You might skip the details about computers and algorithms, but I’d highly recommend reading the last chapter titled ‘life in the universe’ by Stephen. It talks about how life, and we, were actually formed. ^_^

Apart from being interesting, the book is fun to read. I especially loved the dialogues between George and Annie, with Annie being the one I totally love. She’s smart, brave, proud of her high IQ and yet, incredibly sweet. These kids are not scared of mad scientists, for they have enough interest in science and computers to know what they might be up to, and in the process, crack what would be otherwise, unbreakable codes. The story for me seemed to fall flat in between, but the second half of the book and facts in between make up for it. The writing style is simple, yet fun, even quirky to some extent.

If you’re interested in science and want to read a kids’ story by Stephen Hawking (like I did), it’d be worth a read. If you know a kid who’d be interested in space adventures and is curious about the universe, this book (and the series) is recommended. It’s fun and interesting! You could skip it if these topics don’t interest you, because it’s totally around science. And yep, friendship. :)

Thank you Random House publishers for this book!