Goodreads Blurb!
SOMETIMES WHEN THE NIGHTMARE ENDS - THE TERROR IS ONLY JUST BEGINNING
For Hannah Shapiro, a beautiful young American student, this particular nightmare began eight years ago in Los Angeles, when Jack Morgan, owner of Private - the world's most exclusive detective agency - saved her from a horrific death. She has fled her country, but can't flee her past. The terror has followed her to London, and now it is down to former Royal Military Police Sergeant Dan Carter, head of Private London, to save her all over again.
In central London, young women are being abducted off the street. When the bodies are found, some days later, they have been mutilated in a particularly mysterious way. Dan Carter's ex-wife, DI Kirsty Webb, is involved in the investigation and it looks likely that the two cases are gruesomely linked.
Dan Carter draws on the whole resources of Private International in a desperate race against the odds. But the clock is ticking... Private may be the largest and most technologically advanced detection agency in the world, but the only thing they don't have is the one thing they need - time.
James Patterson's white-knuckle rollercoaster has just reached London. Buckle up, it's one hell of a ride!


My Thoughts!
The book is set in London, with the story revolving around the London arm of the world-famous detective agency, Private International. A client from US, a scientist and a millionaire, sends his daughter Hannah Shapiro to study at Chancellors in London. Dan Carter, an ex-war veteran is given the responsibility to take care of Hannah, but there's a lot going on in the city that he needs to keep his eye on. There're murders with weird mutilation and the police forces seem baffled too. Hannah gets into another problem which becomes the top-priority case for Private to deal with, but everything's strange and they're trying to figure out what to do. 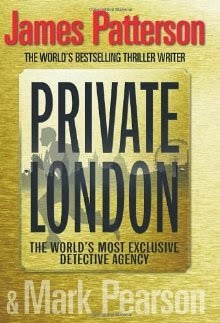 Basically, I was kind of hooked to the plot when I started. It was a little disturbing, yes, but it seemed promising. It was also simple in the beginning and then as new characters were added and the story developed with new dimensions adding on to it, it became slightly confusing. I think it was because there were two crimes going parallel to each other, and both forces (police and Private) kept getting involved in both. You'd probably understand the book a lot better if you also understand that lingo badass cops use. The book's filled with those phrases. And I've noticed that James Patterson isn't much of a comma user. There are always full stops. Short sentences. Full-on detective style. 8|


Talking about the story, like I said, it got a bit confusing because of two simultaneous plots, but it was nonetheless quite gripping, especially because there are small cliffhangers at the end of almost every chapter, so you feel those goosebumps in varying degrees and can't just wait to move to the next one. There were moments in between when I was shocked or surprised over the twists. Some twists made my jaw drop, but once you get used to it and understand the awesome crafty way criminals' and detectives' minds work, you'd like it! I have to admit, though. I felt the ending scenes to be a bit rushed up and the major reason, the true reason for everything happening was either too big to believe or too ridiculous. Or maybe it's because I am not aware of facts pertaining to it, since it's war-related. (I kind of suck at history)

The writing is mostly easy to understand, if you ignore the cop-lingo. I like the way the characters are introduced, in parts and in twists. The story does have a lot to teach and is supplemented with knowledge and an interesting writing style. Since it's like a race against the odds and events that occur, we don't really have time to dwell on the past or experiences of people involved, but the book does take care of it and it works wonders because you don't only read about what is happening and how events are unfolding, you also implicitly get to understand why. That makes the reader get more empathetic to the characters, victims or criminals or detectives. The only thing that might hamper the reading experience would be if you have trouble guessing and understanding the characters' intuition, because there aren't explicit details as to what actually is the case. The writing style is deduction based, it assumes you'd know from the phrases the characters use what is happening, instead of putting it in plain words for the average reader to understand.

Overall, it is worth a read if you're into murder mysteries and care to read about terrorism/war related aspects. I'd suggest the book to mature readers since it can be a little hard to understand and the murders aren't exactly clean.

Some phrases/sentences from the book I liked:

"Things happen for a reason. And when we understand why- then we can take steps to deal with them"

"Justice as far as the law was concerned was a matter of science. But people weren't machines. She didn't know what the other woman deserved. That was way beyond Kirsty's area of expertise. Police didn't get to make that call. Their job was to unearth the facts, and Kirsty didn't believe she had the moral compass to put these facts in order and make a judgment."


Thank you Random House publishers for this book! :)