The Nanny by Gilly MacMillan

on April 03, 2020
As you may have noticed, I am currently on a murder-mystery reading spree. I find this genre the easiest to get through and also the most exciting. That's how I found The Nanny as a recommendation on Goodreads. I found this to be the perfect thriller for someone like me - a grand mix of English aristocracy, armchair-detective whodunnit set in modern times, mysterious family dynamics and the gradual building of relationships that make your skin crawl. 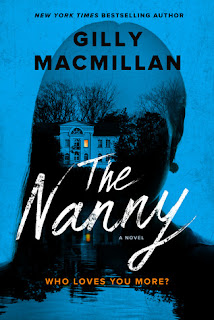 When I started reading this, it seemed eerily familiar with The Family Upstairs in terms of the concept of having strangers enter your family in minute, seemingly innocent ways and ending up ruining your life. Also with Sharp Objects with the protagonist dreading to come back to their home because of disturbed childhoods, but apart from the mild similarities there's nothing else common. The Nanny was unique in its concept, its narration from present and past times with different POVs, and it captured my attention grandly.

Jocelyn had been a seven year old at the Holt house when her beloved nanny Hannah disappeared suddenly. Jo's relationship with her parents remains strained, if not worse. She leaves the house as soon as she could when she grows up, and goes to live in California where she lived with her husband and ten-year old daughter Ruby. After her husband dies, Jo has no option but to take Ruby and return to the Holt house occupied by her mother. The story follows Jo's life in the present time, Lady Holt's increasing love for her grand-daughter Ruby, and Hannah's reappearance in their lives just after Ruby discovers a human skull in the lake on their property.

The Nanny was absolutely thrilling and mysterious. I loved the suspense that was out there in the open - is the skull really mysterious? Is the woman calling herself Hannah really the Hannah that had disappeared? What happened to Jo's relation with her mother? Why do two grown women have such different opinions about their relationship and are unable to fix it?

It is a complex story of human ties that go really deep and have been weathered by changing dynamics within the family and society. More than a murder mystery, it is a story of love, revenge and desires. Despite having all this complexity, the writing style is simple, which makes the narration fast-paced and the book easy to read. I loved the way the revelations came slowly but surely, shocking the reader, yet it keeps going and makes us want more. The characterization is also fabulous - I could imagine Lady Holt, Hannah and Jo vividly as they experienced different things and grew throughout the book. I did find certain things as loose ends which would not make much sense in real life, but I did find the story stronger in terms of its holistic nature than only focusing on catching a killer.

I would go so far as to say that this was my favourite thriller so far in this year - highly recommended with a 5/5 star rating!