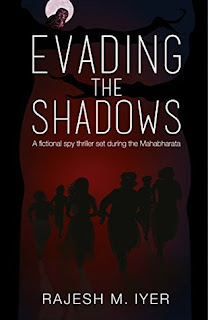 
Book Blurb
India. Circa 3100 B.C.
As the thirteenth year of their exile dawns, the Pandavs realise a dangerous game unfolding, with hundreds of Kaurav spies trying to hunt them down by exposing their secret identities.
Kedipal, one of the Kaurav spies, has stumbled upon a clue that could spell doom for the Pandavs. Duryodhan smells blood. It means a world to him; unquestioned domination for thirteen more years.
Pandavs though aren't completely oblivious to the danger looming large. They know that uncovering their identities means another round of exile, as decided during the game of dice. Will the Pandavs be as lucky as they were in the past?
Hush! Don't read so loud. Kaurav spies are everywhere. You don't want the Pandavs to get caught, do you?

My Thoughts
Though I've grown up around stories of Indian epics displayed in various forms, especially on TV, I rarely had much interest in them. Part of it was because I found it confusing (so many characters!), and partly because they weren't a part of my family life. When I came across this book, I wondered if my lack of knowledge about the Mahabharata would hamper my understanding of the story. Nevertheless, I was pretty much intrigued reading the blurb, which promised spies and thrill, that too amongst the royals! I have to give credit to this book--it not only simplified my understanding of the basics, but it did so in an interesting and easy way.

Evading the Shadows is a quick read, despite its length. It is fast-paced, and the story tends to keep you interested. The beginning few pages offer a quick background narrated in story-style, setting the base for the year during which this particular phase of the story is set. The readers are given a glimpse of the Kauravas and the Pandavas' lineage, and their relationships, so that it becomes easy for the uninitiated to understand the dynamics between characters, as their backgrounds are already (and so popularly) set. Narrations include simultaneous present and past scenes, ranging from a few lines to a few pages in length. This style initially made the story a bit confusing, as I didn't know who all the characters were exactly, but it got pretty much clear in the subsequent pages. The story definitely makes you want to keep reading, and I did. I ended up liking the concept, the storyline, the effort and the writer's attempt. The author seems to have good knowledge of the epic (but again, since I'm no expert, I can only judge according to my own limitations). The storytelling and style followed seemed balanced--you had a glimpse of the Pandavas and the Kauravas and their spies simultaneously. There are rarely any dull moments, and readers are taken into the characters' lives and thought processes as they have been depicted in the Mahabharata.

Throughout the duration of this book being in my "currently reading" phase, I found myself wanting to go back to it, to know where the Pandavas were trying to disguise themselves, and if they were being successful. To know what Duryodhana and his team were up to. To want to see the Pandavas winning the game with elan and little loss. I really liked Draupadi's character: it seemed the most well-formed of the lot. I found it to be a good story. Something that keeps one asking, "What happens next?" There's also light-hearted humour and a good amount of wit.

This book has been attempted really well, but I found the implementation somewhat "unfinished". I wouldn't call it an "amazing" book, because a lot of basics--in storyline, character development, grammar, plot points--were underdeveloped. The book could have been helped with some good editing, especially in terms of grammar. The language used was, again, attempted well. I'm a bit disappointed because I really think the book had potential. Perhaps it would work for a number of readers who care more about the story than all these, but to some like me, these points matter a lot. There were inconsistencies and some points that felt too rushed up or left unexplained. The scenes could have been better described (or even lengthened), and some glimpses into the past could have been avoided. Basically, it looked a bit unfinished, but if you're into mythology and mystery, you could give it a read. It is enjoyable, nevertheless! The language used is good (minus the errors), and it feels like an easy read. Whatever else it did, it has certainly made me curious to read more books based on Indian mythology. Just like I understood Greek mythology more with such books, I realise that exploring the fascinating Indian mythology could be fun!

Note: This is a requested review. Opinions expressed are personal and honest.