One Click at the face of it seems like a book solely about Amazon.com’s business strategies and success story, talking about its founder and CEO Jeff Bezos and how the company came to be what it is today. The book delivers what it promises, but with a lot more value addition in terms of information it gives, the interesting manner of writing, the careful observations and story-telling, along with direct look into Jeff’s mindset and thinking, manner of work, situations and technology.

From the book’s cover
Amazon’s business model is deceptively simple: Make online shopping so easy and convenient that customers won’t think twice. It almost can be summed up by the button on every page: “Buy now with one click.”
Why has Amazon been so successful? Much of it has to do with Jeff Bezos, the founder and CEO, whose unique combination of character traits and business strategy has driven Amazon to the top of the online retail world. Richard Brandt charts Bezos’s rise from computer nerd to world-changing entrepreneur.

Through interviews with Amazon employees, competitors, and observers, Brandt has deciphered how Bezos makes decisions. The story of Amazon’s ongoing evolution is a case study in how to reinvent an entire industry, and one that businesses today ignore at their peril.

My Thoughts!
The book begins with a positive note, describing an interesting incident about how Bezos actually thought about focusing on the customer as Amazon.com’s overall mission, inspired by a man called Richard Howorth, owner of Square Books in Oxford, who was an instructor in the bookselling course Jeff did to understand a bit about book selling. In 1994, two months after Amazon was incorporated and ten months before it was launched, Jeff was bitten by the idea of ‘customer service’ being supreme and although his idea was something that would have no real face to face interaction, he still felt customers should have it all easy and convenient. The introductory chapter(s) give an overall impression of how Amazon started out as a really ‘amazing’ company, enchanting people on the web and all those who came searching for hard-to-find books. It further talks about the 1-Click ordering system adopted by Amazon, that is considered key to its success and which was once again, based on customer convenience (they would just have to click once for purchasing books) and a software program that got patented. 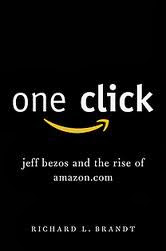 The book then talks about Bezos, his personal and professional life full of allocades and excellence, his jobs and his ways of thinking about the world and perceiving business opportunities, his proactive attitude and enthusiasm and belief in himself. It’s inspiring to read about a person who’s smart, with a great knowledge base in the field of computers, software, programming and technology, along with the zest to have something ‘big’ and who trusts his intuitive feelings and goes about making a success out of something that interests and fascinates him.

A lot of aspects related to the company have been described, like how it was incorporated in a garage, the company’s work culture that was addictive yet vigorous under Bezos. The many unique and efficient technologies used have been described in a language that even a technological-terms-challenged reader like me would understand it all. The book very interestingly, also talks about the Kindle story, based on Bezos’s idea of ebooks, dealing with competition and issues and challenges in the book industry. One also sees how Jeff as a CEO was not always considered “nice”, owing to his overwhelming straightforwardness, but he is a big visionary nevertheless.

One Click is like a story on Amazon’s ride, filled with exciting information. The writing style although interesting, sometimes seems non-personal, because of which I found myself disengaged from the book. Sometimes some facts also seemed repetitive, making it the slightest bit dull, but insights into his genius mind as well as techniques used, experiences worth learning make up well for the dullness by inspiring the reader and making them look at the company with an even more admiring eye. It is an interesting book to read, immensely useful for someone wanting to take up an online business or someone looking for a different kind of interesting read.