on October 08, 2013
This children’s classic by Frances Hodgson Burnett, published in 1886, is a very simple, beautiful story of Cedric (“Ceddie”), a seven year old boy living a simple life with his mother in New York. His father was the youngest son of the Earl of Dorincourt in England, with whom the Earl broke all ties because he married a ‘local’ American woman, a very sweet young girl (called Mrs. Errol, after ‘Captain Errol’, her husband). Captain Errol died when he was very small, leaving behind Mrs. Errol deeply loving and caring for Ceddie. Cedric is what you’d say, the ideal child. He’s beautiful, with bright eyes and golden locks, his manner of speaking honey-sugary, his questions and comments deeply innocent and sweet. From how the book describes him, you’d think there wasn’t a finer boy anywhere!

“His greatest charm was his cheerful fearless, quaint little way of making friends with people. I think it arose from having a very confiding nature, and a kind little heart that sympathised with everyone, and wished to make everyone as comfortable as he liked to be himself. It made him very quick to understand the feelings of those about him.”

And these are just a few lines in the initial chapters. The book’s full of this charm. One evening as Ceddie sat on a high stool with Mr. Hobbs, the grocer, discussing politics, he’s called home by Mary, the caretaker because they had an important visitor. Mr. Havisham, a lawyer sent by the Earl at Dorincourt wished to send for Cedric to stay at the castle, since his sons had died and Cedric was the heir. This change is immense for Mrs. Errol and Cedric, especially as the Earl hates Mrs. Errol so much that he made arrangements for her to stay at a small house outside the castle. The book deals with this change, how a little boy with a kind, innocent heart full of love and affection perceives the world around him. It’s a beautifully narrated story, showing how a well-bred child can make the world such a better place. 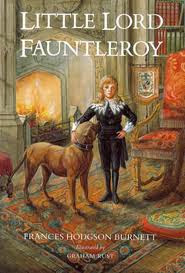 Cedric is now Lord Fauntleroy, the grandson of the Earl of Dorincourt. Before leaving for England, Fauntleroy helps his friends get out of financial troubles, what with all the money he’s now inherited. He’s saddened by the fact that he wouldn’t be living with Dearest (he calls his mother ‘Dearest’, catching from how his dad used to call her that. How “aww” :’) ), but Mrs. Errol manages to make him understand in the gentlest way possible. They still meet every evening. The Earl is a hard-hearted, selfish man. People in his ‘kingdom’ are aware of his selfish, uncaring nature. He never loved his sons, especially the older two, who were totally spoiled, although he was somewhat fond of Captain Errol before he married the ‘local’ American woman.

Fauntleroy thinks highly of the Earl because a grandfather who gives him the freedom to do what he likes, and hence helps people who need money to fix their lives, would have to be someone with a great, kind heart. When they first meet, the Earl’s secretly pleased with the boy’s beauty and he’s surprised that the boy isn’t afraid of him. He’s even more surprised when he realizes that Fauntleroy is the only person who ever thought of him as a kind man. It doesn’t take long for him to grow fond of the boy and gradually as he lets Fauntleroy charm him with his innocent, pleasant thoughts, the people of Dorincourt also see a change in the Earl. There’s more happiness all around as people are taken out of poverty, small kind gestures are often seen and things get so much better. Soon, the Earl gets on friendly terms with Dearest as well and it’s a charming end to an incredibly sweet book.

I never thought I’d like such books as much as I’m doing when I first thought of including ‘reading classics’ in the 2013 Reading Goals. I realized I make awesome decisions sometimes without realizing it! It’s just ‘beautiful’ to read, written in a charming language. The themes this book covers includes the power of love, innocence, good upbringing, kindness, making a difference, love melting the hardest of hearts and the power of strong relationships. It’s amazing, really. I’ll share a few lines among the many I marked in the book. They’re just overdosing sweetness!

Spoken by Cedric: “Once, when I fell down and cut my knee, she gave me an apple for nothing. I’ve always remembered her for it. You know you always remember people who are kind to you.”

About the Earl: ‘He had been so selfish himself that he had missed the pleasure of seeing unselfishness in others, and he had not known how tender and faithful and affectionate a kind-hearted little child can be, and how innocent and unconscious are its simple, generous impulses.’

Dearest to Cedric: “Be only good dear, only be brave, only be kind and true always, and then you will never hurt anyone, so long as you live, and you may help many, and the big world may  be better because my little child was born. And that is best of all, Ceddie, it is better than everything else, that the world should be a little better because a man has lived- even ever so little better, dearest.”

‘It was really a very simple thing, after all- it was only that he had lived near a kind and gentle heart, and had been taught to think kind thoughts always and to care for others. It is a very little thing, perhaps, but it is the best thing of all. He knew nothing of earls and castles; he was quite ignorant of all grand and splendid things; but he was always lovable because he was simple and loving. To be so is like being born a king.’

PS- The book’s been made into movies and there are theatrical adaptations based on this as well. I’m going to watch the 1936 movie, considered to be the best adaptation so far. :D Although, I'm apprehensive because none of the pictures of the many 'Little Lord Fauntleroy's I came across so far are anywhere close in beauty to how he was described in books. Anyhow, we know movies don't match up to books. :|

PPS- Have you read this too? I love F.H. Burnett’s books! (Read: The Secret Garden, A Little Princess and now Little Lord Fauntleroy too!)