In the Sea There are Crocodiles

You know those kinds of books which you look at, think already it's going to be great, and keep them aside to be read when you're free, so that you don't just have to take any breaks in between. This is one of those books, except that I couldn't really stop myself and ended up starting it even when I wasn't having any holiday. But that doesn't matter in the least! Breaks in between or not, this book is absolutely fantastic. Please read this. If you're one of those readers who'd read the book carefully and slowly, you'll find yourself pondering over each line and most importantly, it might even affect your outlook on life.

Goodreads Blurb!
One night before putting him to bed, Enaiatollah's mother tells him three things: don't use drugs, don't use weapons, don't steal. The next day he wakes up to find she isn't there. They have fled their village in Ghazni to seek safety outside Afghanistan but his mother has decided to return home to her younger children. Ten-year-old Enaiatollah is left alone in Pakistan to fend for himself.
In a book based on a true story, Italian novelist Fabio Geda describes Enaiatollah's remarkable five-year journey from Afghanistan to Italy where he finally managed to claim political asylum. His ordeal took him through Iran, Turkey and Greece, working on building sites in order to pay people-traffickers, and enduring the physical misery of border crossings squeezed into the false bottoms of lorries or trekking across inhospitable mountains. A series of almost implausible strokes of fortune enabled him to get to Turin, where he found help from an Italian family and met Fabio Geda.

The result of their friendship is this unique book in which Enaiatollah's engaging, moving voice is brilliantly captured by Geda's subtle storytelling. In Geda's hands, Enaiatollah's journey becomes a universal story of stoicism in the face of fear, and the search for a place where life is liveable.


<sounds interesting, right? :D >
My Thoughts!
As much as the cover is intriguing, as much as you feel curious about the title, the book's even more interesting. First, this is actually not fiction, but the story of a boy called 'Enaiatollah Akbari', who lived in Nava, Afghanistan when he's ten. In the end when he meets the book's author, Fabio Geda, he's in Italy and finished telling his story when he's about twenty one. It's been categorized as Fiction because in some parts, little fictional details  have been added (to fill in the missing pieces). But it's actually a true, wrench-your-heart-out kind of a story. The kind you wouldn't ever want to forget. 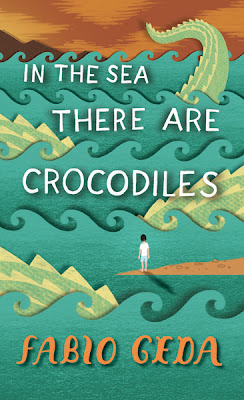 So, at the age of ten, Enaiat is traveling outside Nava, his home with his mother, leaving his brother and sister for a while. His mother takes him to Quetta in Pakistan and makes him promise three things one night. The next day she's not there. The book then goes on to describe, in a soft narrative tone, how Enaiat managed to live in Quetta, the people he met, how he felt those first few days when he was left to fend for himself. The narrative is soft, not too descriptive, as Enaiat focuses on talking about only those things that matter in the story, nothing else. But that doesn't make the book any less engrossing. It's addictive. Even when I wasn't reading (thanks to the end-of-semester hectic schedule in my pathetic college), I found myself thinking about the story. About how, when I was getting sad over someone not talking to me just like we used to, there was Enaiat, a small boy traveling with traffickers, working on construction sites, trying to find people who'd help him. I mean, when you've seen a glimpse of another's life (and Enaiat is actually two years older to me in reality), a life that's in stark contrast to your own, you can't find much to complain about.

I mean really, when I think about it all, I see how different lives can be. While I was probably learning two-wheel bicycling, Enaiat was running around in a factory in Qom, Iran, trying to collect enough wages to travel further, while I was complaining about not having electricity in summer nights as an eleven year old, Enaiat was probably walking lost in Iran, trying to find cardboard boxes to settle into. How then, do you still feel like complaining? It was also sort of a reality check, as I absolutely had no idea how bad things are. Still are. Have I really been so ignorant, not knowing how people are living in some neighbouring countries? We read about how Enaiat goes all the way to Turin, Italy, over the course of five years, where finally, he meets good and kind people who help him, where he finally feels at home. It's euphoric at the end, but it's tragic too. The ending (which was really, the new beginning of Enaiat's life) made me cry. It would make anyone cry, not just because of how such an ordeal it was for him (and also for many others who travel as illegals), but also because we're always worrying over and crying over such dumb things.

We have to know that most of the things we worry about don't matter. That there are people fighting for just survival. I'd recommend everyone to read this book. See how this boy at age ten, travels from Afghanistan to Pakistan to Iran to Turkey to Greece and finally, to Italy by age 15. See how brave he is, see how he looks at the world, it'll change your perspective. This is a book to be kept with you, and I'm not saying this because I'm trying to commercialize the story or anything, but because I feel everyone must be given such an example of bravery, courage, innocence and trust. I loved it. :)

Some lines from the book I saved!

"You must always have a wish in front of your eyes and it's in trying to satisfy our wishes that we find the strength to pick ourselves up, and if you hold a wish up high, any wish, just in front of your forehead, then life will always be worth living."

"Before coming to terms with other people you have to come to terms with yourself. How can you give love if you don't love your own life?"

"... It was just strange seeing all those relaxed, calm, confident people around you when you're the only one to feel lost."

PS- A friend once recommended that I don't sit down to write a review immediately after reading the book, as it tends to get more on the emotional side. I guess this one became like that too, but I couldn't help myself. I had to write about it's awesomeness right away!