Review: From the Eye of My Mind...


I had picked up this book to read a couple of days ago and managed to read about 50 pages in two days, that too in between classes, especially during the boring ones (thank you super hectic college!). I planned to read it more on Sunday, it seemed quite interesting. Now it's still Sunday and I have finished the book two hours ago! From the Eye of My Mind is one book that you don't want to stop reading, once you begin. It has that funny sense of getting a reader hooked, where you don't find anything heavy in the book, but it's just so 'pure' and sweet that you just can't stop. I have no other way of explaining it.

Blurb from the book's cover!
I am eighteen years old and five feet six inches tall. I have big eyes, long fingers, and I am healthy because I eat my food on time. I also have a mole on my left palm. Grandma says, 'Mole on the palm is bad luck.' Eric Hoffer, an American writer, said, 'A great man's greatest good luck is to die at the right time.' I wondered what a right time to die was? I feel I have an eye in my mind and I close it when I am with strangers.

Mallika is autistic and lives in a strangely whimsical yet ordered world of her own. When her mother breaks the news to her that her beloved elder brother Ananth is going to get married, Mallika's fragile world collapses. How will she deal with a stranger in her home and life? Told in an inimitable style, From the Eye of My Mind is a charming tale of acceptance, love and a beautiful mind.

My Thoughts!
Before I begin talking about the awesomeness of this book, I'd tell you in advance that I'd be using the word 'beautiful' a lot. In this review, for this book, beautiful means, 'something that makes you feel all gooey inside, in a remarkably nice way, especially when you read about the innocent protagonist and look at the world from her eye'. Now, the book is essentially written in first person, from the point of view of Mallika, the eighteen year old protagonist who's an autistic, a special child. That's the first thing that's remarkable about this book. It easily makes you forget the world you live in and you get to 'experience' life as an autistic kid. (To read about autism on Wikipedia, click here). Mallika has a remarkable ability to remember facts and trivia, though she may not understand everything. Social interaction is something she shies away from and prefers to be 'in my mind' when she wants to. She loves routine and gets upset when anything from her routine is out of the regular way. More than all that, she's deeply loved and cared for by her family and is absolutely adorable.

I really grew fond of Mallika. Maybe it was the first person thing, like we're reading something she wrote, like a cute story, or maybe because I loved the fact that her family was so caring. I mean, I absolutely adore the way her parents and her brother and even their housekeeper Subbu and Mallika's friend Swati are so comfortable for her. It could also be because of the pure innocence and curiosity that she has. It's just so heartwarming and beautiful. I remember somewhere someone said/wrote about how children teach us a lot and special children, even more. I suppose it's true. As the book's been written as if we're inside Mallika's mind, there is almost everything that she thinks, in the precise way. It's also filled with trivia and facts and information that Mallika's talking about. I don't know. I just am very fond of her! ^_^ 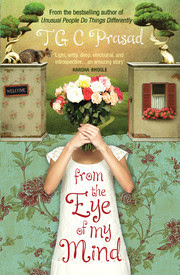 If we talk about the storyline, it's quite simple. There is a family of four, Ma, Pa, Ananth, Mallika. They have a housekeeper called Subbu who has helped raise the kids and is a part of the family. Mallika doesn't like strangers and prefers being only with her family and Subbu, her friend Swati and Sister Alka, her teacher at her school. When Ma tells her that Ananth is going to get married, Mallika's upset because she cannot bear the idea of having a stranger at her home. The story goes on till the time Ananth's married and a little bit after that. It's mostly about how such a development in her family can make Mallika upset and confused and out of sync. But over time and with everyone's help and efforts, she makes it through the marriage, though she hasn't yet accepted Ananth's wife completely. I think I liked almost all characters, with the minute exception of Subbu (just because of her antics, her bus at the kerb thing, and being a BBC) and Julie, Ananth's wife. She seemed fine in the beginning, but I disliked her after she started staying with them, but then kind of went 'she's okay' towards the end.

I really liked the simplicity of it all. It's like reading Mallika's diary, which makes it deeply intriguing, because that's how Mallika is. That's why I personally am so fond of such books. They're emotional, and they give you a sense of someone else's life in such an amazing manner so that you automatically turn introspective and learn to think in a broader light. Initially you may find it exasperating, because you're not aware of a special child's way of thinking, but once you get acquainted, it's impossible to not like it. There weren't really any "quotable quotes" as such, but I liked many manyyy lines in the book, some of which I'm sharing and which would give you an idea of how Mallika thought:


"I found it very funny. When people want to eat something, they shouldn't ask for it. When people are offered something, even though they would like to have it, they refuse. Then you are supposed to ask them a few more times and persuade them to take it. In a way, it is better not to be social. Why do people invent such social customs that make life so complicated?

When I feel like eating something, I ask. When somebody offers me something which I want, I take it. I must write my own social rule book. It will be about all the simple things I could follow and all the tougher ones that I would leave for the world to follow. There will be two paths- the easy one and the hard one. Then people will have a choice. As of now, there doesn't seem to be a choice. All of us are expected to follow one rule book. My rule book will have simple rules- 'Ask for what you want' and 'Say no to what you don't want'. Won't the world be a much simpler place when you say what you mean?"


There were quite a few grammar errors in the book, which I first mistook for a misprint, but as I noticed a few more, I realized maybe it's done intentionally, what with it being written as Mallika's describing it. I'm not sure, though.

Recommended for: Everyone: Young Adult, Teens, readers looking for a witty, emotional read and those who might just want to know more about autism.

Thank you Random House publishers for this book!