Being Nikki is the second book of the Airhead trilogy and is mostly based on Em’s (the seventeen year old female protagonist) life as a teen supermodel. In an accident that seems quite plain, Em got her brain transplanted into teen model, Nikki Howard’s body, who apparently, died in the accident. The shocks and surprises got over in the first book and this one shows Em living the life Nikki would have, if she were alive. However, as we move on to the later half of the book, we start getting uneasy feelings, as if something’s going wrong. As the truth unfolds, it is a whole new direction the story takes!
Storyline
It’s a muddled life for Em, what with Nikki being the Stark Angel for the Stark Fashion show, her complicated love life, Nikki's (real) brother showing up and informing her that their mom has been missing since the "accident". Above all, Em's suspicions that her home as well as that of her parents' is bugged, turn true, much to her fury. One day she finds herself in Christopher's flat where she sees a framed picture of her old self! His flat too, was bugged. To add to it, Christopher had been planning to break into Stark Enterprises with the help of his cousin, Felix, and take it down. Apparently, to revenge Em's death. He offers Nikki to help find her Mom in return for a username and password belonging to someone at Stark. 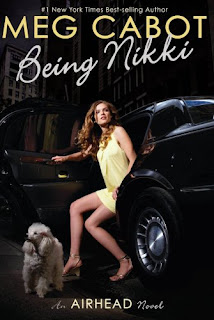 Meanwhile Nikki finds herself being accused of e-mailing ex-boyfriend Justin, by a fellow model, which wasn't true, because Em hadn't been e-mailing anyone. That seems suspicious and she's intent on finding out the truth. It is during the annual party at Nikki and Lulu's place that Christopher finds Nikki and tells her that he knows the truth, that she's actually Em! He had been able to use the information to get into Stark's system and had seen Em's file there and uncovered the truth about her. Suddenly, as if some stroke of inspiration hit her, she finds out Justin in the party and they track down the e-mails from "Nikki". They were coming from Dr. Fong's house!
A doctor who had been in the team that operated upon Em, Dr. Fong confessed when they rounded on him, that he had saved the real Nikki's life! That's because the real Nikki didn't have aneurysm, as was told by Stark and Dr. Fong couldn't let anyone die; especially someone who didn't have anything wrong with them. He placed Nikki's brain into a donor body and took her home. Nikki's mother stayed with them at Dr. Fong's place to help Nikki recover. (Nikki was however infuriated with having to give up the life she loved and stuck inside the doctor's house). This dangerous situation arose because Nikki had overheard some secret and was blackmailing Stark with it. But then, Stark had tried to kill her! All the while this truth was unraveling, Brandon had been eavesdropping, and he decides to play a game on his own. He corners Em and threatens to tell his father the truth, unless she agrees to play along him in uncovering the secret Nikki overheard from his father (they shared a strained relationship) so that he could blackmail him on his own. Em tells Christopher that she loved Brandon and will go with him to his place in South Carolina, along with the real Nikki and her family.
What's special
Em's wit and presence of mind, as she finds out bugs in her loft, her parent's apartment, in her Stark brand cell phone, everywhere. There's a sense of foreboding as Stark cleverly intrudes every aspect of her life. Gradually as mystery after mystery reveals itself and as the truth dawns upon them, the reader experiences increased pulse-rates! It's a lot more interesting towards the end when the whole secret comes out and slightly redundant in the beginning. The ending's sad though, Em having to leave Christopher moments after they knew the truth! However, it's a fun read; you'll not get bored (it's Meg Cabot, you can hardly get bored). If you've read Airhead, you'll automatically go for this one! I liked it :)
(Other books in the series : Airhead, Runaway)
Author- Meg Cabot Fantasy Fiction Young Adult