Review: The Girl on the Train

My Thoughts!
For a long time, I did not know whether or not I wanted to read this book. When it first became a rage, I did not want to read it. But it became a regular feature in several lists, and I couldn't hold back anymore. Never has a book gone on and off my Amazon cart as many times as this!

Rachel takes the same train every morning to go to London to work. She is familiar with the landscape outside her window. The train often stops at a red signal near a residential street, and Rachel glimpses the lives of people living there... sometimes with painful longing, because she used to live there once. A few houses down from her old house live a beautiful couple who had come to stay there a little while after Rachel had left. She calls them Jess and Jason, and thinks they're lucky to live the kind of life she had dreamed for herself. Until one day, she sees something that disturbs her, something she can't get off her mind.

Almost as soon as you begin reading, you can see that there's something about Rachel that's off the mark. Then you realize that she is an alcoholic. Her muddled mind is a cause of concern not just for her, but also for the reader, because she can be what some people refer to as an 'unreliable narrator'. What are you supposed to believe? Unwittingly, Rachel finds herself entangled in a criminal investigation. She knows what she saw, but her own interpretation of it, combined with her own doubts about her actions, makes it difficult to stay focused on facts alone.

I was hooked onto the book right from the beginning, spending a whole day reading it. That felt nice, especially as it had been quite a while since I'd had that sort of reading engagement. Whatever else it doesn't do, I'd give it a full score for being able to hold my attention throughout. The storyline is fast-paced; you wouldn't find it dull. The book is also about the secrets we all keep. How you cannot really know a person from afar, how there's so much behind closed doors that it becomes essential, and uncomfortable, to go into uncharted territory to really understand what's going on. 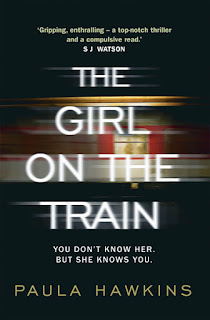 It was the writing style where I thought it could have been better. Perhaps it was the same format (first person narration in diary-entry style) for different character narrations, but there seemed a slight lack of distinction among the three different narrating characters. They seemed to have the same voice. And then the characters--I'm not sure I liked any of them. Sure, everyone has problems, and the plot needs people to behave in weird ways to keep up the suspense, but the dumbness and sadist pleasure needs to be controlled somewhere! [Spoiler: I haven't been as frustrated with a character as I have been with Anna, wife of Rachel's ex. For a while in the later half of the book, I thought I'd like to really shake her by the shoulders and shout some sense into her ears.] I also felt that the overall impression of women seemed negative. All the women characters in the book are either weak or unreliable or insecure or dependent on some male. None of them can think for themselves. Not really a good thing to show.

Nevertheless, that's the thing about this book, something I'm having a hard time trying to put into words--No matter how I thought that the writing style was not up to the mark, I still read the book in one sitting. The tight plot was a good idea. I just wish whoever thought of that had also thought of making the characters more interesting. The ending began to feel intriguing, but then it became a mess yet again. I admit to not having guessed the culprit (that could have been because of my general lack of interrogation as a reader), but even then it somehow fell a little flat.

I would still recommend it to anyone who's looking for a quickie read in the thriller category. Final verdict: A bit overhyped, but can be read if you're craving some quick-paced thriller.

Anyone who's read it too? What do you think about it?