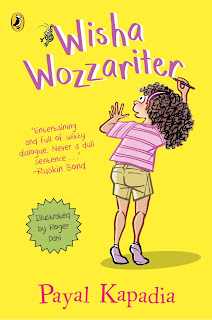 I sometimes stalk book lists just for fun, and this one came up in quite a few lists with key words: children’s books, Indian authors, best reads, and the like. One of my reading preferences for the past few years has been children’s books, so it was only a matter of time before I found myself face to face with this book and picked it up. Now let’s get to the point.

The book is about a ten year old girl who loves to read. I loved the way the book started, talking about Wisha’s reading habits (she read before and after school, dinner, and all the time in between). Such a heroine for a bookworm kid! (Or an inspiration for a I’m-yet-to-turn-into-a-bookworm-kid) But she isn’t just a reader. She reads a good book and thinks that she could have written it too (like err… To Kill a Mockingbird). Then a bookworm (character Bookworm) pops up from a page and asks, “Why don’t you?” And thus Wisha is all set for an adventure. It involves Bookworm and other characters that come along the way as Wisha takes the Thought Express to go to the Marketplace of Ideas. Basically, the entire book is a personification of the writing process written from the perspective of a child, for children.

The good parts:
1. What fun language! It’s sure to have the reader keep reading. It’s action-packed and does not drone on and on about a single thing. It’s also quite short at 77 pages. I really liked the writing style.

2. Well-created characters for so short a book. Each character is distinct and so well-described that you’re least likely to forget any. You’ll even remember the minor characters (perhaps because they’re reinforced through Wisha’s thoughts in the later part of the story, but still).

3. The whole idea of explaining the writing process as a story. There’s a bottle of inspiration, a room to sit in and think, an imagination balloon, the marketplace of ideas (where you get all sorts of ideas – new, old, rotten. You cannot buy any, but you’re free to exchange them!), and a market where you can get your story’s heroes: brand new ones are costly, but you can always get some at the thrift shop. And of course, because this story is about a realistic scenario (what happens to a writer during the writing process), you also need some luck.

The not-so-good parts:
There’s only one. Two pages into the book, and I had a horrible feeling of déjà vu. “This is so like The Phantom Tollbooth,” I thought. It was with feelings of dread that I resumed reading, but thankfully it soon became clear that the similarities ended there. The Phantom Tollbooth by Norton Juster is a book that takes young Milo on an adventure through a magical tollbooth. It uses places, time and events as characters, and full of phrases used as real things (Milo sets off on the road to Expectations, Princesses Rhyme and Reason need to be rescued to return to the Kingdom of Wisdom, etc). And oh, there’s also a market for words where you can buy and exchange words. Hmm…

Still, the author has put her own spice, ideas, and STORY that makes the book feel like it has influence from another book, but has a different story in its own right. So that’s good. The imaginative ideas related to books, reading, and especially the writing process, are well-thought out.

Recommended for children who love reading, or think they’d like to write too! If you’re interested in kids’ books (like me), you could read it just as well.

This was a luckily spotted book in a second-hand book stall at the New Delhi World Book Fair. I’d read about this book being one of the good children’s books, and one of the very good books centred around the Holocaust told as a children’s story. So I felt really lucky to have found it at all, more so when I read and loved it.

Anna and Max live a comfortable life in Berlin, going to school and playing on their games compendium. Their father is a popular writer, which was part of the problem for them at that time. They were Jewish, and what their father wrote was not taken well by the Nazis. In a sudden flight to leave Germany and go to Switzerland, the family leaves their home and their life behind as they flee to safety. They were lucky. Just the day after they left, the Nazis had come for their passports.

Narrated from the perspective of children, the book brings out Anna and Max’s curiosity for the world, while keeping their personal life and experiences at the forefront. Anna is actually excited to go to Switzerland, living in hotels, looking at the fabulous mountains and making Swiss friends. Gradually, their financial status takes a downturn as Anna’s father gets a price on his head and the Swiss people are not too keen to get him to write for their papers. Meanwhile, Anna and Max adjust to their new school and a life in an inn. When it doesn’t work out in Switzerland, they move to Paris.

Their new home is tiny as compared to their house in Berlin, and their mother has to do all sorts of household work which she couldn’t do before. They keep a tab on all their expenses, and it becomes a subject of argument between the parents. This tale of a family’s move from their home to other countries to seek refuge and safety succeeds in bringing out children’s view of the world, complete with their innocence and hearts full of wonder and love. It also effectively brings out the fears and struggle faced by refugees while trying to protect their children.

It is also simply written, and will hold a reader's interest for the most part. It got a little slow for me somewhere in the middle, but overall it was a very good book. It's not too 'heavy' either, and keeps Hitler and his details to a minimum while showing the effects of what he did in Germany. I greatly enjoyed reading this, and will recommend it to kids and adults alike.