The Quilt and Other Stories by Ismat Chughtai

on December 27, 2014
Sometimes as readers, we’re so enamoured by stories, books, themes and writing styles that are foreign to us, and to our culture, that we spend less time digging into the literary scene of our own country. Perhaps that’s because we choose those contemporary books that go super-popular and have snazzy titles, but later realize that they’re not even close to our preferences. So we avoid it altogether, not trying too hard to experiment. But then in between those rare trials, we find a book(s) that’s not on a bestseller list in the present scene, but is relatively well-known to a small section of people who’ve read it. We realize that digging deep and experimenting aren’t all that bad, and we give it more chances, and most of the times when we’ve got a hang of the kind of thing that’d be good for us, we come across more such titles and stories. We love them!

One such book I read is called The Quilt, Stories by Ismat Chughtai. She was a courageous Indian Urdu writer who was also a fierce feminist, and in her stories, explored themes of female sexuality, middle-class gentility and other areas of social reality.

This collection has ten short stories, nearly all of them centred on feminism or having female characters bravely depicted just as they really are. These stories do not create fantasies or promote wishful thinking, but are descriptions of people and life as we all might have seen around us. One might think that the absence of a ‘happily ever after’ would make the stories depressing or non-hopeful, but the effect is opposite. You would be left thinking about them for a long time afterwards, and probably would feel even more close to them, just for the realness of them.

Be it the story of a child bride, getting beaten up and abused by the in-laws, yet having her own innocent ideas, or that of a woman scared of childbirth; be it a story of a woman who spent thirty years not getting over the man she loved, or that of a domestic worker thinking of the Englishman as her man – the stories do not shy away from presenting stories of people who’re very much real, very much messed up and whose stories are looked down on. 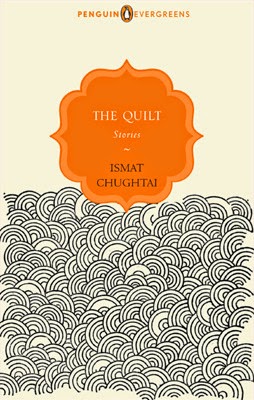 The beauty in Ismat Chughtai’s stories is in the writing style and the realism, the frankness and light-heartedness with which they’ve been narrated. If the translation manages to make a reader love those stories, no doubt the original Urdu version would be amazing! I’m finding it a little hard to describe the writing style. It’s simple, yet the stories are narrated in a way that you just cannot stop reading! Half the things are not direct, but implied, and that makes this narration just so unique.

One of my favourite stories in this collection is called Roots, and is about two families from different religions, living next to each other with utmost friendship that spanned three generations. That was a time when partition was limited only to a joke, but then it started becoming a reality, extended family and relatives started flocking in to the two houses, and a deep chasm was created in between them. After many, many years when the lady of the house refuses to leave for Pakistan along with her children, the story reflects her pain, confusion and memories associated with the place. Where is home? What is this stupid thing called ‘our land’? Is it not here, where she was married, where her children were born and where her husband lay buried after fifty years of marriage? This, and other stories like these do not talk about politics or superficial ideas, but the small lives of real people who just want to live a love-filled and happy life.

I’d recommend this book if you’re interested in stories that explore women and their lives, Urdu literature, popular classical authors, or Indian stories. It’s a light-read that would definitely leave you with something to remember.

Find it at: Amazon / Flipkart
Translated by M. Asaduddin in 2001. Published by Penguin Books in 2011.
Recommended to me by a super-duper friend!