Nathaniel Hawthorne (1804-1864) was an American novelist and short story writer*. His stories are themed upon dark romanticism and centered around evil, sin and the dark side of human psychology. In the past week, I've read four short stories by Hawthorne, as part of an online course. That made me wonder why on Earth did I neglect classics earlier? You know how you know of popular names in the world of literature, yet you hardly ever check them out? That's not the best idea. Check those authors out, and to complement that, read up story analyses on the net from authentic sources. There's soooo much to learn!

# 1: Dr. Heidegger's Experiment (click on the title to go to the book's Goodreads page)

A notable researcher and scientist, Dr Heidegger invites his four old friends to his study. These four friends have had not-so-great lives, and they're all old now. So when instead of the expected boring experiment, Dr Heidegger produces a draught supposedly from the Fountain of Youth, the friends get excited. This book explores man's fascination with achievement by defying the laws of nature, using science. From how I interpreted the story, the four friends get wildly excited as they think they're getting younger, and the maturity they displayed at old age seemed to have been replaced with the foolish acts of youth.

It was actually a refreshing read. It's mysterious as well, in the sense that a reader would be fascinated not just with the events that occur, but also with the setting and what the various, mystical objects signify. This story expresses the lure for youth and beauty that's present in human beings. You can read this story in the book, Twice Told Tales by Nathaniel Hawthorne.

Aylmer is a brilliant scientist/alchemist. His wife Georgiana possesses unparalleled beauty. He should be a happy man, but his ideals for perfection are so strongly rooted in him that he feels terribly for that little red birthmark on Georgiana's cheek. His revulsion to it is so strong that Georgiana starts hating it too, before feeling like she should die rather than let that horrendous birthmark make her husband shudder. Aylmer, convinced of the power of his scientific knowledge (which has been doubted, by the way), decides to make his wife rid of that birthmark. What follows is a story of man tampering with nature's creation, and dealing with its after-effects. (No. It's not as simple as plastic surgery, in case you were wondering)

The Birthmark is a story of humanness in all things. Of flaws present in the most seemingly perfect things, and how sometimes the quest for flawlessness becomes too overpowering. Also, since this was written in the year 1843, when science was seemingly too fascinating and new, it also shows an over-dependency on science and trusting it to solve all problems.

Giovanni Guasconti is a student at the University of Padua. He discovers a beautiful garden near his living quarters, full of brilliant plants and herbs. Someone tells him that it is Rappaccini's garden, a man who literally lives science. As Giovanni starts observing the garden, he notices Beatrice, the beautiful daughter of Rappaccini, who enchants him at one glance, just like she did many men before Giovanni. She's just so beautiful. Entranced, Giovanni finds a way to talk to her, and it soon becomes a routine. He cannot just stay away from her, even when he starts feeling that she's not entirely right. Or does he think so? Does he feel like that based on rumours about Rappaccini's monstrosity and about Beatrice? I had initially believed it all to be true - Rappaccini meddles with nature in the most horrific way, resulting in his most prized possession - his daughter - suffering the consequences. But when I read a fellow student's essay on this story, I got another point of view. That of trust in love. If Giovanni had believed what he felt rather than what he saw or heard, could he have had a different, happier relationship with Beatrice?

The story can be interpreted in different ways, I realize. It is partly Gothic horror, relating to the acts of Rappaccini and how it seems to affect those who come in contact with it (read Giovanni). It can also represent the perils of trying to overpower nature with science.

“There is something truer and more real, than what we can see with the eyes, and touch with the finger.”

# 4: The Artist of the Beautiful 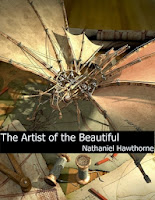 Among the four stories, I'm most conflicted on this one. I found it a little difficult to read because of it's elaborate descriptions, but I loved and hated it at the same time. I'm not sure why, except that I loved the essence of an artist depicted in this story, but hated the way it ended. True, a lot of stories by Hawthorne, if not all, do not have happy endings, but I wanted to shout and fling my Kindle across the room (which I obviously did not). I might be biased, because I was anyway reading a lot of stories by the same author, based on similar themes of science. But still.

Owen works in a clock shop as a watchmaker. He's been dedicated to working on something 'secret' that he is creating, which turns out to be a mechanical butterfly of unimaginable beauty. It is a story of an artist, and describes in chilling relatable language, the way an artist feels - for his art, for the world, for the people who do not understand him. I'm no artist, but I had flashbacks of people who seemed to be like the ones Owen runs away from. Probably that's what made me sad. Then there's this wonderful idea of an artist's spirit embedded in his work, so much so that it seems like it is competing with nature. Again, we see themes of nature vs science in this, but I want to focus only on art and artists and this confusing world! I'd recommend people invested in creative work to read it. If you feel the story drags because of descriptions, I'd suggest you to be patient and still read it. Hopefully you'll end up loving it. Even if you don't, you would get a brilliant insider's account of an artist's mind, which you most definitely need to know. Read this book, okay? It's a short, short story!

The last three stories are available in the book, Mosses from an Old Manse by Nathaniel Hawthorne. Have you read any of these? Or perhaps Hawthorne's other popular novel, The Scarlet Letter? What do you think of such classics?