Review: The Ocean at the End of the Lane by Neil Gaiman


I was introduced to Neil Gaiman only recently, and it made me feel somewhat stupid, not knowing him already, considering he's been writing since forever. It's alright, though. Better late than never! The first book by him I got to read was The Ocean at the End of the Lane, a fantastical account of a middle-aged man as he remembers a time as a seven year old boy in his old home in Sussex, England. Filled with magic and nightmares as we all would have related to as children, this book is one of the most unique I've ever come across. Reading up on Gaiman revealed that that's his style. I'm now quite looking forward to read his other books!

Sussex, England. A middle-aged man returns to his childhood home to attend a funeral. Although the house he lived in is long gone, he is drawn to the farm at the end of the road, where, when he was seven, he encountered a most remarkable girl, Lettie Hempstock, and her mother and grandmother. He hasn't thought of Lettie in decades, and yet as he sits by the pond (a pond that she'd claimed was an ocean) behind the ramshackle old farmhouse, the unremembered past comes flooding back. And it is a past too strange, too frightening, too dangerous to have happened to anyone, let alone a small boy.

Forty years earlier, a man committed suicide in a stolen car at this farm at the end of the road. Like a fuse on a firework, his death lit a touchpaper and resonated in unimaginable ways. The darkness was unleashed, something scary and thoroughly incomprehensible to a little boy. And Lettie—magical, comforting, wise beyond her years—promised to protect him, no matter what.


A groundbreaking work from a master, The Ocean at the End of the Lane is told with a rare understanding of all that makes us human, and shows the power of stories to reveal and shelter us from the darkness inside and out. It is a stirring, terrifying, and elegiac fable as delicate as a butterfly's wing and as menacing as a knife in the dark.

As the unnamed middle-aged man visits his childhood home and sits in front of a pond, his memories of a time when he was seven come rushing back. He remembers the house at the end of his lane as one belonging to the Hempstocks, and his eleven year old friend Lettie Hempstock, who used to call the pond her 'ocean'. I'm still not completely sure what the underlying meaning of the whole book was. Is it simply a fantasy tale in essence (considering the ending) or an attempt at celebrating and remembering our childhood? The memories of the man as a seven year old revolve around the suicide of a tenant they had, at the end of the lane. This suicide opens up a series of events that seem to come straight out of the nightmares of a child. Is all that real?

The parents of the boy bring in Ursula Monkton, the new nanny for the children, and the boy takes an immediate dislike to her. He fears she is the result of his mistake at the magical farm when he was with Lettie. She had asked him not to let go of her hand, but he had, and what ensues in the form of the "flea" that Ursula Monkton is, is all his fault. Or so he seems to believe. He tries escaping the monster in his home, one who is manipulating his father and making his home a living hell. He seeks Lettie Hempstock's help. She's eleven, but she is very much capable of making the horrors go away. 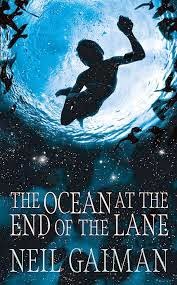 The story is captivating, although at some parts I felt it went on and on about the same thing. Even then, it's unpredictable and you wouldn't know where its heading, what with the absolute uncertainty as to what is real and what isn't. For me, it was something befuddling. And something that seemed like a combination of many imaginative nights I had as a child. There's no telling for children as to how they see the world around them, how one incident can trigger off a series of nightmares, not necessarily related, making one feel like they're living in a monster-infested world. There have been some moments, some things one does or feels sometimes, that have been included in the book. This seven year old feels like what we all might have felt sometime in our lives.

There was one paragraph that I was surprised to read. I'm not the only one who gets into these kind of moments! *yess!* Here it goes:
'I wondered, as I wondered so often when I was that age, who I was, and what exactly was looking at the face in the mirror. If the face I was looking at wasn't me, and I knew it wasn't, because I would still be me whatever happened to my face, then what was me? And what was watching?'

The author's writing style is also simple, and the book is a quick read. The main character is the boy (the middle-aged man who starts the story), with other characters of prominence being Lettie Hempstock and her mother and grandmother, Ursula Monkton - the flea - and the narrator's father. Even though most characters did not have a brief sketch about them, they're very easy to sketch out using their actions and behavior. The ending was satisfying, if not somewhat delightful for a person who loves the idea of a fantasy world running parallel to the one we live in. For all its genuineness, I'd recommend the book to lovers of fantasy, imagination, young adult fiction. The Ocean at the End of the Lane is considered a fairy tale for adults, probably because of a few mature scenes or more so because of the content of the book, which adults will very well relate to, reminiscing their childhood.

Some marked quotes from the book:

'Adults follow paths. Children explore. Adults are content to walk the same way, hundreds of times, or thousands; perhaps it never occurs to adults to step off the paths, to creep beneath rhododendrons, to find the spaces between fences.'

'Growing up, I took so many cues from books. They taught me most of what I knew about what people did, about how to behave. They were my teachers and my advisers.'

'Lettie shrugged. "Nobody looks like what they really are on the inside. You don't. I don't. People are much more complicated than that. It's true of everybody."'

'I do not miss childhood, but I miss the way I took pleasure in small things, even as greater things crumbled.'

'I said, "Will she be the same?" The old woman guffawed, as if I had said the funniest thing in the universe. "Nothing's ever the same," she said. "Be it a second later or a hundred years. It's always churning and roiling. And people change as much as oceans."'