Fooled by Randomness was a book I had been putting off reading in favor of the attractiveness and pull of fantasy genres. I mean, just look at the yummy YA books out there! If you have issues with holding and containing your impulses to just read YA, books like these might be sidelined, but that's just me. For anyone even remotely interested in understanding the dynamics of our psychology, luck, chance and randomness in life and how it applies to what we do everyday (especially what traders in the stock market do everyday), this might be a book you'd quite enjoy reading. I got down to it finally when an assignment required me to read and review a book based around the financial markets and I figured it'd be cool to read this one! It was just worth it.

Blurb from Goodreads!
The word-of-mouth sensation that will change the way you think about the markets and the world.This book is about luck: more precisely how we perceive luck in our personal and professional experiences.

Set against the backdrop of the most conspicuous forum in which luck is mistaken for skill–the world of business–Fooled by Randomness is an irreverent, iconoclastic, eye-opening, and endlessly entertaining exploration of one of the least understood forces in all of our lives.

My Thoughts!
I often used to think that books that belong to category of Non-Fiction would be interesting, yes, but not as gripping or telling me stories like the fictional ones do. Probably Fooled by Randomness didn't really tell me a story as such, but it did suggest and explain the theories the author wished to explain, along with his interpretations and understanding about the role of luck and chance in life, with the help of interesting instances, examples, and real life facts. The book basically says, "it is more random than we think, rather than it being all random." At first glance and read, the book seems to suggest that everything in life, especially successes are the result of some kind of randomness, and it seems to bash every kind of 'success', by attributing it to randomness rather than skills. The author by that quote wishes to convey that that is not really what he means, but simply that randomness has a greater role in life than what we give it credit for. 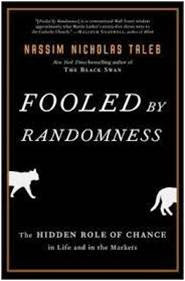 The author has drawn conclusions about a lot of things, especially successes and patterns observed in the stock market based on his experience in Wall Street and taking examples from his colleagues. He's used numerous well established theories (Alternative History, Monte-Carlo Simulations, Nonlinerarities in life, Skewness and Asymmetry, Induction, Survivorship Bias, etc) and based them around stories of the lives of traders, and also ancient stories (like that of Solon, the Greek legislator and poet), to give substance to his interpretations:

- Human beings are unable to handle randomness by intuition, they tend to have explanations even when there are none (like how we actively provide a critique for literary and art works)
- We tend to attribute an extraordinary success to strategy or leadership or (ha ha) intelligence, while most often it is just dumb luck
- Past performance cannot be blindly used to estimate future performance (things in the past might not happen now because they might have been just random!)

This is kind of hard to review, since it is more like a collection of essays based on different themes and theories and stories, mostly revolving around statistics and probability and drawing really interesting conclusions. What's good about this book (and what made it an engrossing read for me) is that it isn't too technical. Yes, there are terms you might not be familiar with, but there are explanations. And the even better thing is, you can simply not focus too much on the jargon and just read the interpretations and you'd understand it all. It's been made quite an easy read with this kind of writing style. Although if I have to talk a bit more about the writing style, I'd have to say the author's been a little too critical and bold in his criticisms of pre-established thoughts. It's like he's downright attacking what you thought with little kindness to go with it. That might hurt traders and people who might just 'look a little too deep' into meanings, like the author says they do. ;)

He's not that brutal, either. At the beginning of the book somewhere, he says, "It certainly takes bravery to remain skeptical; it takes inordinate courage to introspect, to confront oneself, to accept one’s limitations- scientists are seeing evidence that we are specifically designed by mother nature to fool ourselves" so you know, you don't need to feel too bad about being a fool of randomness. :P

I'd like to mention some lines I really like from the book:
“Heroes are heroes because they are heroic in behavior, not because they won or lost.”

"Somehow words and reason became ineffectual in front of an oversized diamond, a monstrous house and a sports car collection"

“We favor the visible, the embedded, the personal, the narrated, and the tangible; we scorn the abstract.”

This, for when you need some inspiration!
“Those who were unlucky in life in spite of their skills would eventually rise. The lucky fool might have benefited from some luck in life; over the longer run he would slowly converge to the state of a less-lucky idiot. Each one would revert to his long-term properties.”

Actually, there are a lot of quotes I've marked. I'd be writing them down for a friend. If you want to know them, just email me and I'll send a copy across. ;)

Recommended for: He says MBA students read this book the most (simply because they think it applies to other MBAs and not them :P ), but yeah, it'd be a nice read for them anyway, especially since you'd get an opposite perspective to everything you thought holds true. I'd also recommend this book to anyone who's interested in studying 'randomness' and looking at the application of statistics around the stock market, or simply for a mind-stimulating intellectual read, if you're willing to skip the jargon and read his observations! :)