The sweet, simple cover of this new title by Sheila O' Flanagan, author of many bestsellers, gives off a nice, homey effect. It isn't too appealing, the kind you'd be attracted to in a bookstore, but maybe you might. It's something like a combination of look-at-me and something that can easily be overlooked, depending upon the person who's looking at it. I found it sweet, calm and simple.

The Blurb!
Abbey Andersen is the last person to go looking for change. Yes, it's tough that she barely sees her mother these days - but in San Francisco she has great friends, a steady relationship and a job she enjoys. When Abbey is contacted by Irish lawyer Ryan Gilligan she learns in an instant everything she believed about her roots is a lie. She must travel to Dublin to find out more - but she's scarcely off the plane when she's plunged into a new crisis. One that will change everything not just for Abbey but for the family in Ireland who had no idea that she even existed. Now Abbey has to make a choice that will affect everyone she knows. How can she be sure she makes the right one? And can life ever be quite the same again?

My Thoughts!
Things We Never Say is a story based in Dublin, Ireland as well as in San Francisco. Abbey is a twenty-something girl living in San Francisco, away from her mother, working in an art gallery and then as a very talented nail artist. When she's contacted by Ryan Gilligan, a lawyer a very good-looking Irish lawyer  who's been looking for her mother, things change for Abbey as well as everyone involved in the family, a family she didn't even know existed. There is definitely drama, but the book isn't full of it. It's a big book with a storyline and many characters and it deals with the story at its own pace. I found it very detailed as far as the story and the characters are concerned. There's adequate background to every character so that you know them fully well before judging them for their actions. Even if you don't know initially, you get to know them over time and I found that really good. 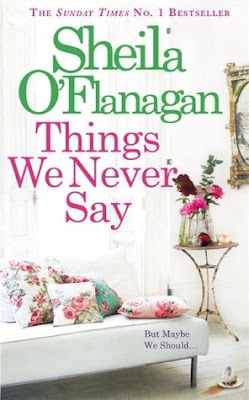 Initially it seems like the plot is dragging and there is some confusion due to different chapters telling stories about different characters and you can't figure out who is whom and what role they play in each others' lives. After about a 100 pages or so, you understand most of the linkages and you've been acquainted with everyone's introductions. That's when the plot seems to start developing pace. There are a series of events that take place in Abbey's life, she's confronted with information she finds hard to believe or deal with, she's already tense dealing with a broken relationship and career decisions and then she's faced with an entirely new set of problems. This is a family issue. She finds out she's related to another family in Ireland and there's a lot of conflict and drama as she tries to live with the the way her life takes turns. I took my sweet time reading this book. It wasn't gripping-engaging, but it was engaging enough to make you remember certain parts even after you've read them and to make you think of it when you're not reading. You can't "not" think much about it.

I found the writing style simple and easy. It's got that flow which keeps you inside the story like you're a part of it. Once you're used to the different characters, it's easy to read about them and their actions one after the other. It's a big family with their problems and different views and lifestyles. The descriptive part is all cool. Neither too much, nor too little. Although I can't say that for when it comes to talking about the characters in the story. That is because I personally found it like a detailed account of 'people'. Every person was different, with their own story, their own reasons for being like they were. There are ego issues, under-confidence issues, trust issues and a lot of things. Why is it that you don't even say the things you mean to say to your loved ones? Why do you assume so much? Before you know it, you'll die without letting them know what you meant, what you really felt, leaving problems in their wake.

I have to mention Abbey's character, which was so close to real that I just loved it! I found Abbey to be so much like me. Not in terms of physio-graphic stuff, but more so psychologically. She's confused and under-confident about her career and the way she feels when she says, 'I can't be the best artist, so I'll not do this' is so relate-able. I loved how she transformed and developed her confident personality with the support of all those who cared for her, became more assertive and open and learned to trust herself. There's a past involved, one which has been responsible for all the latest tension in the family, one which is disturbing, but those who're already dead. So how does it affect the ones who're having to face the consequences? Reaching the end of the book made up for all the drag that was in the beginning. It's an interesting end, the kind of which I like. ;) I marked a few lines from the books. Some of those are:

'It was funny, she thought, no matter how much you got over things that happened to you, you never forgot how people made you feel.'

'That was the trouble with looking back. You couldn't help doing it from the perspective of where you were now.'

'She wondered how many people came home for a funeral and then had to face people they'd rather not bother having to talk to at all. And how many others felt cheated when someone died before they had a chance to say the things they'd always meant to say.'

'I can never leave a part of myself behind. Nobody can. Everything's that happened to us makes up who we are today.'

Recommended if you are interested in family drama and big, complete stories with a lot of different issues and messages.! :)

Thank you Hachette publishers for this book! :)