Going through that particular shelf in the library where I usually find the most amazing books, I came across the name 'Nina LaCour' and was immediately reminded of some other book that I'd come across by the same author, The Disenchantments. I knew for a fact that it was a good book and I guessed this might be worthwhile as well. I'm so so so glad I picked it up! (You know, without wanting to sound bashful, but I think I've got one among the best books-chosen-from-the-library choices). Just for the record, I've added this book to my wishlist. :P

Goodreads Blurb!
An arresting story about starting over after a friend’s suicide, from a breakthrough new voice in YA fiction. dear caitlin, there are so many things that i want so badly to tell you but i just can’t.
Devastating, hopeful, hopeless, playful . . . in words and illustrations, Ingrid left behind a painful farewell in her journal for Caitlin. Now Caitlin is left alone, by loss and by choice, struggling to find renewed hope in the wake of her best friend’s suicide. With the help of family and newfound friends, Caitlin will encounter first love, broaden her horizons, and start to realize that true friendship didn’t die with Ingrid. And the journal which once seemed only to chronicle Ingrid’s descent into depression, becomes the tool by which Caitlin once again reaches out to all those who loved Ingrid—and Caitlin herself.

My Thoughts!
Hold Still is an immensely profound book. It is Caitlin's story of dealing with her best friend Ingrid's suicide. The story starts off with Caitlin spending the summer roaming forests with her mother, who's trying hard to help her daughter deal with the trauma. The trips make hardly any difference and before she knows it, she's back in school. It's hard for Caitlin to start a new year at school without her best friend, especially their favorite class, photography. Ingrid had a great talent when it came to photography and both of them would spend their weekends on photographing experiments. Their photography teacher Miss Delani is like a role model for the girls, but when Caitlin returns without Ingrid, why does Ms. Delani ignore her? It's an excruciating journey, Caitlin's transition and dealing with the depressing effects of Ingrid's suicide, but it's not a depressing novel. Everything has been described so beautifully and the emotions in such vivid details that you can't help feeling those same emotions like the characters do. 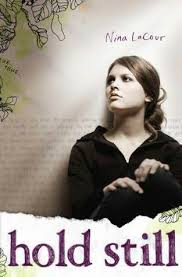 There isn't anything that seemed unnecessary. The book has detailed descriptions, but it very cleverly sticks to only describing those parts that are central to the story and the rest are either left out or written in such a way that the reader imagines them. That's one of the many things I liked best. It's mostly about Caitlin, her feelings and emotions and actions, written in such a way that you'd feel like you're reading something right off her own mind. It's not something that isn't yours, or someone else's story. It was just beautiful. Gradually, Caitlin makes friends with Dylan, the new girl at school and with Taylor, who likes her, two people central to her transition from being a depressed girl to someone nearing normalcy. I just am not able to describe exactly how it is, because with these words, it seems like a sad book, but it's not. With the minute detailing, it is very close to reality and if you've lost someone close, you'd be able to understand and relate to it better. And if you haven't, you'd understand what the emotional pain and dilemma is like. It isn't even exaggerated in any way.

For example, it tells how Caitlin feels when she finds Ingrid's journal under her bed. It was meant for her to find it. She doesn't know how to feel about it, or how to act. She's scared and upset and decides to go through it one page a day. She discovers things about Ingrid she didn't know. She's already mourning, missing her, in such emotional pain that it's almost physical, her parents trying hard to bring her to do things to take her mind off the sadness. Hold Still is like a journey through almost a year, how Caitlin gradually starts feeling more like normal. There's still a void, but she does a lot of things that help her calm down. Things she feels are right, for her and for Ingrid. Photography for one. After she feels betrayed by Ms. Delani, she deliberately does poorly in her assignments. In the end, the teacher sorts it out, because she herself was going through an emotional dilemma. Caitlin heals herself through photography, with the help of her new friends, her parents, music and visiting their (Caitlin and Ingrid's) secret hideout and favorite place, an old theater that's soon to be demolished.

She does things that make her feel like Ingrid deserves those and they are purely soul-lifting. "Painfully beautiful" are the words I've used to best describe the book. It was also inspirational for me because with those amazing descriptions, you could totally feel and look at the photographs they clicked, just with the words that were used to describe them. I used to enjoy photography and spent hours at a stretch working on those and the book moved me enough that I picked it up again. :D The writing style is amazing, engaging and feels completely honest. I liked the way the characters were described, how they come and go, it all seems natural and like I mentioned before, nothing's repetitive or unnecessary. It's just beautiful. ^_^

'People take one another for granted. How amazing it is to find someone who wants to hear about all the things that go in your head. You just think that things will stay the way they are. You never look up, in a moment that feels like every other moment of your life and think, "Soon this will be over." But I understand more now. About how life works.'

'It was the moment I realized what music can do to people, how it can make you hurt and feel so good all at once. I just stood there with my eyes closed, feeling the movement of all the people around me, the vibration of the bass rise through the floor to my throat, while something inside me broke and came back together'.

'Sometimes inspiration strikes; other times you have to hunt it down.'

'It isn't the happy ending that Ingrid and I have dreamed up, but it's all a part of what I'm working through. The way life changes. The way people and things disappear. Then appear, unexpectedly, and hold you close.'

PS- I don't think I've done the book justice with this review, because I'm still not sure how to express what I really felt. It's a beautiful book and let's just say you're missing something if you don't read it!