A Wanted Man by Lee Child...

The latest Jack Reacher thriller, A Wanted Man is set in the suburbs, around Kansas City, Denver, Iowa and the surrounding places. It's a very different kind of a mystery for me, as far as a Jack Reacher thrillers are concerned. It's not that I've read many of those, but still.

Four people in a car, hoping to make Chicago by morning. One man driving, eyes on the road. Another man next to him, telling stories that don’t add up. A woman in the back, silent and worried. And next to her, a huge man with a broken nose, hitching a ride east to Virginia.

An hour behind them, a man lies stabbed to death in an old pumping station. He was seen going in with two others, but he never came out. He has been executed, the knife work professional, the killers vanished. Within minutes, the police are notified. Within hours, the FBI descends, laying claim to the victim without ever saying who he was or why he was there.

All Reacher wanted was a ride to Virginia. All he did was stick out his thumb. But he soon discovers he has hitched more than a ride. He has tied himself to a massive conspiracy that makes him a threat—to both sides at once.

In Lee Child’s white-hot thriller, nothing is what it seems, and nobody is telling the truth. As the tension rises, the twists come fast and furious, keeping readers guessing and gasping until the explosive finale.

My Thoughts!
A Wanted Man is a unique thriller. It starts by Jack Reacher trying to hitch rides to go to his destination- Virginia. Thanks to his stoical build and a freshly busted nose, he looks quite intimidating to the normal eye and it's a long time before he gets a ride. Things turn starkly scary, in the most mildest sense because the reader as well as the characters (victims) feel the build-up to something sinister, while Jack's in the car. He was offered the ride by three people in similar outfits, probably corporate people going for business related work. Two men and a woman who's stubbornly quiet. It's a road-based story for the most part, as the events happen during the road trip. Reacher figures out that the woman is a victim and it's her car and it's a carjack kind of a situation! They try to figure things out, but the events take an unlikely turn. 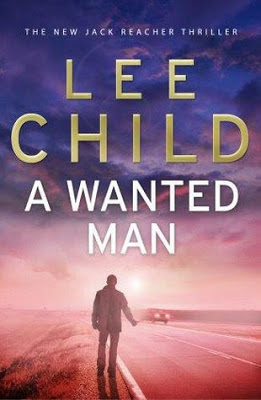 The whole book is actually quite unpredictable, because towards the end, no one is really what they were in the beginning, all except for Reacher, the poor recently-turned-civilian who seems to find himself stuck at odd spots and in the midst of dangerous crimes during his journeys. There's a sense of betrayal for the reader because once you put in your trust on someone, you realize later on that they're not who they were supposed to be. For a change, this book has no "civilian" involvement. All the good and the bad guys are either high profile police agents (FBI, CIA, and the like) or some sort of organized institution. That made the book different to its counterparts in a lot of ways. Language, for one. And that's a risky part because if readers aren't hooked on to the book already, all the technical language and details might be lost to them and they may lose interest. But considering how it's all explained in the way Reacher's mind works, I guess it'll be alright.

The writing style is good, like usual. Though once again I found myself getting desperate for longer sentences. Reacher's part is portrayed through his thoughts, the way they form in his mind. And he thinks with a lot of full stops. After every few words. Just like I'm doing. Like this. :P I mean, it's my personal qualm, I'm a sucker for long sentences. But that's just a part of Reacher's character. He focuses on details. Every single one. Actually, that's the best thing I like about him as well. He's such a thorough man that he knows almost exactly what the situation is, or could be and the way it's unraveled in the book, all such details come with almost a minor shock to the reader. Or at least with a small skip of the heartbeat! I'm quite fond of Reacher's skills. He seems to use his brain more than the usual detective guys I've read about and it's almost like psychology.

Which really makes the whole thing interesting, because the stories end up being psychological warfare, coupled with a few fights-with-guns-and-armor in between. There are some ghastly scenes as well, purely because Reacher describes everything in so much detail. The whole 427 pages cover almost 24 hours (which made me somehow think 'Dan Brown!', but there's no other similarity) and I liked the way it shows the spontaneity with which the authorities spring into action! Whatever time of the day it is! That made me completely "whoa! That's just awesome", because for the most part, the plot is running and full of action. Maybe because of a few days break I took in between, or because I was getting more than enough of driving through countryside roads, I felt like it disconnected in between, when everyone's real identity was revealed and they got together to plot. Or maybe I was suffering from oh-you-betrayed-me syndrome.

Overall, the book is an entertaining and heart-twisting read. I was shocked for a bit towards the end (hint hint: a bullet all of a sudden and a spontaneous death :'( That was OH NOOOO!!) ), but then I remind myself that it's a story and it's okay. (It's not, actually, but we try so hard to convince ourselves, right?). I'd recommend this book to mystery and thriller lovers, fans of Lee Child, and those looking for an intelligent mystery. There's a lot of technical stuff, though. No adult content, unless you count the killings and their bloody details.


Special Agent Julia Sorensen (oh how I loved this character!): "If you tell the truth, you'll not get into any trouble"
Jack Reacher: "You still believe stuff like that?" (Ha! You got it so right. I love you!)