Review: The Secrets of the Dark...

From the Book’s cover!
Is one born with his destiny or does he forge it?In the mystical land of Gaya, two prophecies bind the fate of men and empires alike. The Destroyer born from the royal seed on the Land of the Setting Sun shall bring the empires down, or so has been foretold.In between the Destroyer and the world stand the Seven Guardians of Gaya, guarding the realm of man. A king, a father, defies the Seven and fate itself to save the last drop of his blood and prince Agni grows in the Land of the Rising Sun, exiled from his own people, unaware of his past.Losing the woman he loved most to the shadows in the dark, Agni is thrown into a whirlpool of events that he neither knows, nor understands. His quest for vengeance brings him to the doorstep of a secret that will shatter the very foundation of beliefs of a world.Can Agni avert his destiny? Can he uncover the truth about the Seven and the prophecies, now hidden behind a veil of ignorance?The secrets of the dark are sometimes so terrible that they are better left unsaid. 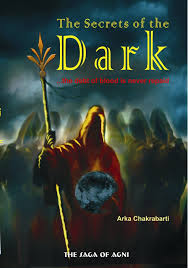 ‘Secrets of the Dark’ was, in many ways, the kind of a book I hadn’t read before. I don’t mean myths and fantasy, God knows I grew up with those! But Indian. The mythical (and mystical) land of Gaya comprises two large continents: The Land of the Setting Sun and the Land of the Rising Sun. The rest you can get from the blurb, but maybe you won’t. I understood the whole thing exactly after reading the book. It’s basically a story based on a prophecy, good guys saving the prophecy and those associated with it, the bad guys after the third unknown prophecy (two were known), secrets, mysterious people, a little bit of magic, lots of royalty (which I love. A lot), skilled fighting, murders (more like genocide), wars, betrayal, and the like. *Catches her breath*

As evident, the story has a lot of aspects associated with it. If you see it metaphorically and a bit literally, it actually shows the real complexities in life. Usually books are centred around a part of the whole range of possible stories, but this book seems to touch upon every aspect, which works both in favour of it as well as against it. First, the characters: well-described and well-created! I could create images of each person in the book (and it’s weird when I think that some weren’t even completely described, but maybe it’s just me) and that hugely helped in connecting the characters to the story. I mean, my favourite character could easily be Princess Lysandra (Land of the Setting Sun), primarily because I was too happy to have a female-hero! I loved how she easily fitted into what was typically always shown as a man’s role, leader of the war-troop! Yay! :D From the Land of the Setting Sun, Agni is my favourite. What a man! *Positively drooling* Like, really.

Second, the descriptions were okay. At least I could imagine all the scenes and events as and how they took place. Maybe because of the story being that way, or because of the darkness-inducing cover and mediocre font-setting, most of the imagined part was dark, except for some parts describing Nisagra, it was all about darkness and fights. Not so good for the soul. Third, the story: remarkable. It’s a great imagination. If you look at it overall, it seems fantastic. However, the problem is that you understand everything only after you finish the book, because everything seems to be stuffed towards the end. I wished it could have been interspersed in between, giving out information in parts, in intervals. That’s because, I admit, the book became quite boring in between. There was just action, talking about two parallels side by side (Land of the Setting Sun and The Rising Sun) and there’s no way to know how it’s connected.

I didn’t understand why we’re talking about King Crixus and then suddenly about King Adhirath. Not till the end of the book, did I make a connection. Yes, the surprises were breathtaking, and that was just awesome, the story has a lot of potential. The problem was the writing style. I am very much sure it could have been a lot better. The descriptive aspect is okay, but the narration is not. The writing looks immature at some places. I mean, it’s still good, still keeps you wanting to read more, but I got miffed with it in between because it wasn’t good quality writing. Another problem was the visual appeal of the text. The text was tightly closed, huge paragraphs without breaks, grammatical errors, it gives off a negative vibe. If this book would be revised once more, I’m sure it can get better. Like I said, the story is amazing, the characters are amazing and so is the mystery. I developed a love-hate relationship for some characters towards the end, when I understood the reasons for their actions and I liked the scope of reality it has.

Oh I just wish it was better written. The readers are left clueless in between, not being able to make any connection between the parallel stories and especially since it’s a long book, that’s risky because the reader can leave the book in between. Overall, it’s a fair read, worth going through the confusion to read the breathtaking end (which is not exactly the end, because there would be two more books). ‘End’ reminds me, what about Yani? You cannot just end a book without telling us what happened to one of the main characters! This is not a cliff-hanger, it’s total mood-murder.

Recommended for: Fantasy lovers, experimental readers, and if you’re looking for a different kind of mythical book.