One choice can transform you—or it can destroy you. But every choice has consequences, and as unrest surges in the factions all around her, Tris Prior must continue trying to save those she loves—and herself—while grappling with haunting questions of grief and forgiveness, identity and loyalty, politics and love.

Tris's initiation day should have been marked by celebration and victory with her chosen faction; instead, the day ended with unspeakable horrors. War now looms as conflict between the factions and their ideologies grows. And in times of war, sides must be chosen, secrets will emerge, and choices will become even more irrevocable—and even more powerful. Transformed by her own decisions but also by haunting grief and guilt, radical new discoveries, and shifting relationships, Tris must fully embrace her Divergence, even if she does not know what she may lose by doing so.

Insurgent continues from where Divergent ended with Tris, her brother Caleb and friend-cum-lover Tobias walking away from a terrible simulation controlled war, towards what they hope is safety. Turns out it's safe nowhere. There are secrets, people hiding those secrets, people so vulnerable that they can be controlled and made to kill at the press of a button, development of new simulation technology, deaths, tears and helplessness. With the simulation controlled Dauntless killing off half of the Abnegation, there's a conflict among the different factions. The Erudite is in control, Candor and Amity do not want to get involved and Tris has changed. She's now controlled by grief, at the loss of her parents who died for Abnegation, at the loss of her faction, at seeing half the Dauntless turn into traitors and joining Erudite. More than that, she's overwhelmed with guilt at shooting and killing a friend who was simulation-controlled and a danger to her life. Later in the book, in parts where she faces danger, she's the one who'll act at the drop of a hat! Totally reckless. 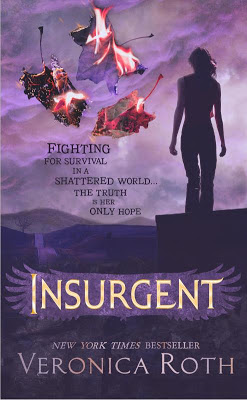 As the story moves on, Tris and Tobias and the rest of Dauntless who want to stop Jeanie (who's controlling all the actions), venture from one place to another, one person to another, facing dangers and unbelievable situations. There's a growing strife between Tris and Tobias, as both of them are hiding some things from the other. Also, Tobias is frustrated with the reckless attitude Tris seems to adopt. There are many new characters in this book, all from different factions (made essential as all the factions ultimately get involved in the fight) and some old characters have been defined and stretched more than they were previously (thank you so much of action!). I wouldn't say any of them was a sore. I liked the way all of them seem real, they're flawed and behave much closer to how you or I would act. While it was good to see and read about new personalities, it did get a bit confusing, especially as the book is so long (which is good too, by the way. Too many pages of awesomeness!). Or maybe I felt this way because I read it little by little, in parts, rather than at a stretch.

The story is great, very much capable of keeping you on tenterhooks, specially if you read it continuously. There's a lot of action and hopping around different factions, revelations after every few pages, suspense at just the right places, measured humor and sensible dialogues. Reading it is a pleasure, definitely. More than just looking at it from a simple reader's point of view, I would also appreciate the way these books (Divergent and Insurgent) have projected a possible futuristic society. I know it sounds too far fetched to be real someday, but the rate at which technology is going, I think mind-control simulations would be here someday,  and with this book, we know how, if power goes into the wrong hands, it can destroy a whole society. I like how this book goes to a deeper level, as if addressing these fears and pretending they've actually taken shape. Pretty much evident from the jump to a more serious writing style than I felt in Divergent. And oh, the ending! It's killing me. I want to know what happens next! This book has one of the most suspense-filled endings!

As always, some lines from the book I marked:


"Do remember, though, that sometimes the people you oppress become mightier than you would like"

"People, I have discovered, are layers and layers of secrets. You believe you know them, that you understand them, but their motives are always hidden from you, buried in their own hearts. You will never know them, but sometimes you decide to trust them."

"You're insane," says Tobias, "that's not the way the world works, with everyone keeping score."
"It's not?" Peter raises his eyebrows. "I don't know what world you live in, but in mine, people only do things for you for one of two reasons. The first is if they want something in return. And second is if they feel like they owe you something."
"Those aren't the only reasons people do things for you," I say. "Sometimes they do them because they love you."


The only thing that didn't make me happy was the relevance of the word "Insurgent". It's been mentioned only once, that too towards the end when a character calls Tris Insurgent, a word he created to describe her. "Noun. A person who acts in opposition to the established authority, who is not necessarily regarded as belligerent." I mean, yes, it does define how Tris has been behaving throughout the book, and probably it's right, meant to be this way, but it didn't sit well with me. Maybe because it came towards the end. I like suspense, but suspense over what the title means? Maybe not. Divergent was better in this aspect at least. We knew what we're reading about. Just to mention, I loved Divergent much more. But then , I always love the first books in the series best. It might be a first-book-bias, for all I know!