Blurb from the book's cover!
Tiana's school year has just started and looks bleak already. Her boyfriend is concerned they 'don't connect anymore', her best friends are being super nasty, her lunch group has been taken over by new comers, and the final nail in the coffin: a blast from the past, whom she believed she had left behind forever, has moved to Hill View High.

Will anything go right for Tiana as she juggles friends old and new, tries to stay in her teachers' good books and most importantly, attempts to keep all the boys at bay while she figures out her own feelings?

My Thoughts!
This book is a sequel to Pink or Black, which introduced the little world of Tiana and her friends when they're Class X students at Hill View High boarding school. Pink or Black 2 takes off from when they're beginning a new year in school, with the baggage of the past on their shoulders, teachers' and parents' heavy expectations in front of them, and some new (unpleasant) surprises for Tiana! Tiana's life seems like it's on a roller coaster, Karam, her boyfriend thinks they should break up, her friends are acting weird, especially Bella, who seems to hold a grudge against Tiana for just about everything. Then there's Tea, Tiana's cousin who joins her school this year (yep. That's her name, after the beverage). This is not all, there's one more person, a new character, whom Tiana had hoped never to see again, but there he is, a 'hot new guy' at Hill View High, bent on making her life as hellish as possible. Okay, not really, but he was a lot of trouble.

All through the book, it's all about how Tiana's friends gradually start acting like enemies, beginning with Bella. There are a lot of misunderstandings, fights, wrong-place-wrong-time kind of situations, horrible back-biting and whatnot. Tiana definitely has a lot of boy trouble. As if two boys were not enough, a third crops up in the middle of the book. What I liked about this book was the introduction of 'new' characters. Tiana is sort of 'banished-by-chance' from her usual lunch table and she finds it easy to make friends with the other girls, who're not as snooty as her 'friends' are. Even though the new characters added a lot to the book by making it interesting and showing the school as something much more than just Tiana's group of friends, I sometimes felt that it may have been a bit too much. I mean, all those new characters added a whole lot of drama to her life, more than it already is. Though I have to say her new friends, Sara and gang, seemed quite pleasant (or maybe the only ones who are). 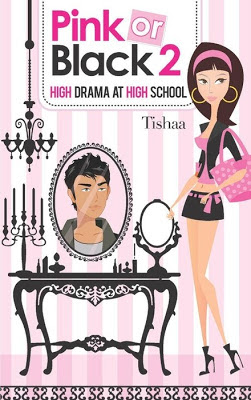 Coming to characters, Tiana's a strong willed and smart girl, someone who knows her boundaries and is not afraid to speak her mind as and when the situation demands it. I really admire her for these qualities, but I wish she wouldn't be such a magnet for weird guys! (But who am I to say? :P) Maybe I feel this way because I understand how frustrating it can be and I wanted some comfort in knowing that she'd be able to get away with such silly stuff, but that's not the case, unfortunately. Apart from Tiana, the only other character I admire is Karam, a sensible guy who likes Tiana for who she is. I've been wanting to write this one thing ever since I got into the first few pages of the book: I do not like Bella, at all! As a character, she represents the snooty girl who's aggressively jealous, mean and cares more for herself rather than thinking about her friends. I guess she could have been made likable if she did anything positive or realized the error of her ways anywhere in the book, but that's what was slightly disappointing. Tiana's friends are so obsessed with themselves that she doesn't seem to fit with them anymore, which I guess was simply a reflection of what happens in real life. Haven't most of us gone through a similar situation? I was getting kind of restless seeing Tiana still staying on good terms from her side with them, though I was immensely relieved to see her finally reacting to all the non-sense by lashing out at them and coming to terms with her situation with a few realizations and good decisions.

Tishaa's writing style is quite simple, and engrossing. She doesn't use heavy set words and phrases, which makes the whole reading experience quite 'easy' and 'light' and I'm sure, readers are able to easily connect with the characters and the sequence of events. Another good thing about it is that it has a wonderful 'flow' to it, with no breaks or hurdles. Thanks to it, you'll be able to finish the book in a day, if you just sit/lie down in a comfortable place and have all day to read, because really, once started, it's hard to put down! ^_^ The message is quite similar to the first book- that of individual choices and 'growing' as a person, shown as Tiana dealing with her innermost feelings and preferences as opposed to those of her friends. Compared to the first book, this one definitely shows the maturity in the characters (or maybe just in Tiana), but it's definitely visible. Even then, I'm not sure which book I like better. The shortcomings of the first are covered in this one and where this one lacks ("too" much drama, I think), the first book was perfectly balanced. Anyway, it's a well-thought attempt, with better writing style and the kind of teenage fiction you'd love to read if you're into high school drama kind of books! This is the first book (except for the first in the series) of this kind that I've read by an Indian author and it does not disappoint! :)

Recommended for: Teenagers, YA readers, chick-lit lovers and generally, anyone looking for a light high school drama story!

PS- How can I miss mentioning: the cover! *cuteness* :D


This review is a part of the Book Reviews Program at Blogadda.com. Participate now to get free books!