Killing Floor is the first book based on the life of a mysterious fictional man, Jack Reacher. It's a thriller, a crime fiction of the kind I hadn't read in a long time. I'm so glad I got to read this one. It was a welcome break from my usual fantasy stories, I learned a lot and I now know that I can handle gruesome descriptions of killings and murders, contrary to what I believed, that I'll get all 'Oh-my-God!' reading those gory scenes! ;)

Welcome to Margrave, Georgia—but don't get too attached to the townsfolk, who are either in on a giant conspiracy, or hurtling toward violent deaths, or both.

There's not much of a welcome for Jack Reacher, a casualty of the Army's peace dividend who's drifted into town idly looking for traces of a long dead black jazzman. Not only do the local cops arrest him for murder, but the chief of police turns eyewitness to place him on the scene, even though Reacher was getting on a bus in Tampa at the time. Two surprises follow: The murdered man wasn't the only victim, and he was Reacher's brother whom he hadn't seen in seven years. So Reacher, who so far hasn't had anything personal against the crooks who set him up for a weekend in the state pen at Warburton, clicks into overdrive.

Banking on the help of the only two people in Margrave he can trust—a Harvard-educated chief of detectives who hasn't been on the job long enough to be on the take, and a smart, scrappy officer who's taken him to her bed— he sets out methodically in his brother's footsteps, trying to figure out why his cellmate in Warburton, a panicky banker whose cell-phone number turned up in Joe's shoe, confessed to a murder he obviously didn't commit; trying to figure out why all the out-of-towners on Joe's list of recent contacts were as dead as he was; and trying to stop the local carnage or at least direct it in more positive ways. Though the testosterone flows as freely as printer's ink, Reacher is an unobtrusively sharp detective in his quieter moments—not that there are many of them to judge by.

Despite the crude, tough-naïf narration, debut novelist Child serves up a big, rangy plot, menace as palpable as a ticking bomb, and enough battered corpses to make an undertaker grin.


Okay, by now I guess you must have had a little idea of the story. There's a man called Jack Reacher, who got tired of his military life and since the past six months since he retired (kind of, as he's in his thirties) he's been simply travelling to different places, wherever his heart takes him. Until he randomly picks up a dot on the map and reaches Margrave. It was as he was having his first breakfast at the place that he was arrested. What follows is a mysterious follow up of an already mysterious scene! 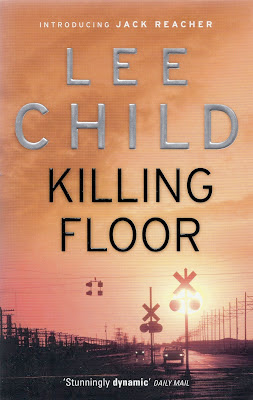 When the book started, all we knew was that the protagonist of the story has been arrested for a murder. In a town he's been for less than 8 hours. And he's totally innocent. The story is narrated in first person, from Jack's viewpoint, which makes it interesting and 'different' in a way. How? Because Jack is a person who lives alone (no family, a brother near Margrave with whom he hasn't been much in contact with) and he hasn't spoken much for a long time either. That's why his sentences are short. Very short. It sometimes got disruptive. Short ones break the flow. I wasn't used to it. See? Sentences like these, all through the book! Personally for a reader like me, who's in the habit of reading (and writing) stuff in very long sentences, it was disruptive in the beginning. Like you have to stop after every short breath. Not much my type.

The main idea of the plot gets clear only after you move ahead gradually (it's a long book!) and there are new characters, most of whom you can't distinguish as either innocent or guilty. I'm happy with the other characters though, who've been properly defined and that makes it easier to imagine everything. That wasn't the case with Jack, though. I found it hard to imagine the guy (and I found mid-way that his bio is on the first page, before the story starts :P) as there was always an air of mystery behind him. The point is, we don't think of such people as 'normal', right? But he is. So what if he chooses to travel and has no home or family? Point taken, but sometimes we need an image in mind. I might have missed something, I guess, but I still wanted a picture. So I went with the author's picture only ;)

Alright, those were things that bugged me a little. (I know I should mention the good parts first, everyone does. I usually do, too. But I can get weird sometimes :| ) Now over to why this book is worth a sure shot read! One, the story and the mystery. The main reason why the murders were happening and the scam was interesting. This book gives you the feel that you're learning about something very important from a person's perspective. There's a lot of interesting information based on the prime scam, which added a lot of positive points for this review. I totally love books that do make us learn stuff on new, interesting topics. Also, the way the events were sequenced was quite logical and there were definitely some surprising surprises along the way, which made me hooked to the book especially after half of it was over. I mean, it was 'unputdownable' in the later half. Really.

Talking about the later half, that's where the real action actually began. Reacher's involved now as he knows his brother was killed by those controlling a secret scam in Margrave and he's bent on revenge. Paired with Roscoe, the female police officer (who's also his love interest) and Finlay, a smart 'chief of detectives', Jack's doing a lot of thinking and making use of his military background and work to solve the crime. It's thrilling! (And the sentences do get longer!)

There aren't many 'quotable quotes' in the book, but I found some thoughts quite interesting.

'Evaluate. When the unexpected gets dumped on you, don't waste time. Don't figure out how or why it happened. Don't recriminate. Don't figure out whose fault it is. All of that you do later. If you survive. First of all you evaluate. Analyse the situation. Identify the downside. Assess the upside. Plan accordingly. Do all that and you give yourself a better chance of getting through to other stuff later.'

The ending was good. I like good endings. Though now it makes me want to read more of Jack Reacher, this was only the first book. And there are a lot of books on Jack! (Yay!) I would recommend this book to fans of crime fiction and thrillers, though according to me, you have to be an adult for this kind of a reading. There are details, gory details of the murders (again, I'm glad I know I can read this stuff!) and some unpleasant thoughts from the point of view of killers and from those who want revenge. But hey, the mystery is really good and lovers of mysteries would stick to Jack Reacher, I guess! ^-^

PS- I got to know from the author's website that 'Jack Reacher the movie' comes out in December, 2012! Eeeeppp!! I'm so going to watch it!! :D