Review: When the Snow Melts


When the Snow Melts is a thriller, based in London, about the activities of spooks and spies and agents in the Intelligence Assessment Group (IAG) and the al Qaeda! It was a very different kind of read for me, the likes of which I've never really read before and I'm glad the author was kind enough to send me a copy. Thank you sir!

From the book's cover
Veteran spook Ritwik Kumar is sent by the Indian government to the Intelligence Assessment Group (IAG) in London, where intelligence agents from all over the world work together to fight global terrorism. The IAG has a few pet projects. Nabbin Osama bin Laden and Mullah Omar is one. Purging Pakistan's secret service agency, the ISI, of rogue elements and fundamentalists, is another.

Despite years of working in Central Asia and Afghanistan, things don't go well for Rikwik at the IAG. Addiction to alcohol and gambling drive him to borrow heavily from loan sharks and even misappropriate office funds. When Ritwik's senior officer, General West, gives him only a fortnight to return the money he has stolen, Ritwik defects to the al Qaeda. But he is a man who doesn't really fall in line and doesn't share al Qaeda's ideology.

Events take a turn for the worse not only for Ritwik but also for all those who come in contact with him. Even the beautiful Nilofer, who is married to the al Qaeda fanatic and one-man army Junaid, is not spared. When the Snow Melts takes you through a dangerous world of diplomats, spies and fanatics, where appearances are deceptive, and danger lurks around every corner.

My Thoughts
Like I mentioned before, this book was 'different' for me, in the sense that I'd never known stuff the author talks about, example, what do diplomats really do? How do people turn spies? What religion means to one may be totally different to another, that betraying your own side and getting to the enemy is called 'defecting', all interesting stuff. Add to it the very mysterious characters. I guess it comes from the story line that requires the characters to be and act like someone they're not, since they're spies and all and you can't really wear your hearts and minds on your sleeves when you're in the intelligence or in the al Qaeda, for that matter. It did get frustrating at times, but that's how it's supposed to be. Keep secrets- till the very end. 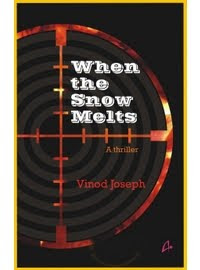 The story starts with Ritwik getting into debt, followed by loan sharks and then defecting to the al Qaeda for safety, though obviously it's not that easy. It's heavily mysterious in the beginning for one, since you don't know exactly who Ritwik is following, who's leading him where and why. Two, there are a lot of activities happening, the kind of which we could never dream of! When Ritwik defects, he's held almost captive in a house that's used as a shelter or workplace of sorts for a few al Qaeda members, since they're not yet sure if he's a double agent or not. A series of events take place, verification, arguments, fights, patching up, information, secret messages, mysterious characters, new places, new people, inkling with newer agencies! Literally a roller coaster ride, as the book moves from one scene to the second to the third.

Apart from the events, it's the people and their behaviour that really baffled me! I was all, 'really? That's how diplomats have to be? If it's like that, people have a really subtle definition of 'being diplomatic' in their minds', if that's how the word's derived, that is. They're so like chameleons, you can't point your finger to any one single person in the story and say for sure, 'I know who he really is'. It's not a negative thing though, as it adds a dimension of keeping the reader's interest. Even though yes, you sometimes feel you've been betrayed by the characters, since you start feeling in a particular way about one character and the next thing you know, they're just the opposite of what you thought they were. But as I said, it's how it's supposed to be. Those guys have to behave like that! Like, beating up someone and still staying in the same place, eating together, talking the next moment. Feels kind of weird, considering how we never ever can do stuff like that, but then, those people aren't us. It's all about pretends, spying and getting information for the right people, keeping the rest informed on just a 'need-to-know' basis. Surely keeps you awake all through!

The other interesting thing person is Nilofer, the wife of one of the al Qaeda spooks, Junaid, whose house was being used for their stay. The more interesting thing is the budding love between Ritwik and Nilofer, starting when Ritwik sees her without her standard burkha, finds her incredibly beautiful and it just builds up as Nilofer helps him after all his beatings and stuff. Ritwik plans to put his real motives into action and rescue Nilofer from her husband's beatings, which she doesn't resist for fear of having to go back to her family in Pakistan. But lo and behold, there's a twist here as well! Ha! I really didn't see that one coming.

Now, the first thing I read by this author was a short story titled, 'Getting off a Virar Fast at Borivali' in the book, 'Urban Shots: Crossroads' and the reason I liked that story was the descriptions. It was simply, only about a passenger's ordeal in getting off an overfull train, pretty ordinary stuff, but the author made it really interesting and picturesque. That descriptive aspect was very well visible in this book too. From that point of view, I think it's just as how it's supposed to be, neither too less nor too much. :)

All in all, the book's an enjoyable read, recommended for mystery and thriller lovers and those who read about all these intelligence agencies and spies. It's mostly on how these guys operate, their behaviour and description, their activities and people. Interesting stuff.