Behind the Blog # 7: Loving Animals 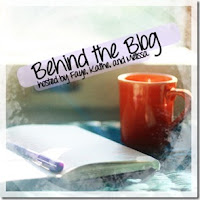 Behind the Blog is a meme to help bloggers connect their life and interests to the content showcased on their blog. The co-hosts, Faye, Kathe, andMelissa will provide a different topic, idea, or question every week that bloggers can relate to themselves and the books, films, or other media they find interesting!

Animals are everywhere and can make a large impact in people’s lives, so this week we’re asking how you feel about animals. Are you an animal lover? Do you get on with animals but don’t go out of your way to spend time with them? Do you dislike them? What is your favourite animal? Do you own any pets?


In relation to books and films, what animals have you loved reading or watching? This can include animals like werewolves, if you so wish!


When it comes to talking/thinking about animals, I'm pretty sure of what I feel about them. I love all animals and why not? Just because we've been created with far better abilities than them doesn't give us any excuse to hate them. But... and that's a big but, I still haven't got over my phobia of going within touching distance of them. It isn't that I don't like touching them, but I abstain from it because of the fear that they might bite or something because I've never had a pet and I don't know how they'll act! And it makes me sad. I mean, it's such a little thing, everyone I know is okay with it and I dream of sky diving and such stuff but I'm scared of animals because they might bite me? It's funny in a way as well and hugely embarrassing.

I remember though, when we were kids, we built a makeshift shelter for little puppies of stray dogs in the neighbourhood. I know I was comfortable with them back then but I don't know how the aversion began. Maybe it's because I and my little brother did have stray dogs after us (and there are so many stray dogs here). Plus, once we were at a family friend's place who had two dogs as pets and when they were feeding them, I was watching them fascinated, the way their tongues lapped at the milk and the way they gobbled down the food. Before I could look away, one of them looked up and our eyes met (weird usage of words, but that's what it was) and the next instant they were barking like anything and came running straight at me. I was a kid and I guess I suffered a mini heart attack of sorts. I was later told that you shouldn't be watching them while they eat. Is that really true? Because the stray dog whom we feed with milk and bread occasionally never minds it. I watch it all the time. From behind the door.

Let's say I did try to get over it. While in school, I visited a friend's place three or four times and she has a pug as a pet and she totally adores it. Of course I love it too, in a way. I just can't stop my heart from being terrified when they rush out to strangers (and it happens whichever place I go to), though now I've learned to be sure to be wearing full length jeans if we're going to anyone's place with a dog as a pet. As stupid as it sounds, I'm scared they might bite at my ankles otherwise.

I hope I'm not sounding like I dislike them, because I do love them. They're fascinating, just from a distance. A stray one in our block once got stuck among some underground pipes while giving birth! There was a hole of sorts outside a neighbour's house and the dog had gone there to look for  a safe place for its puppies (apparently, another stray dog had been killing her babies previously and she needed a safe hiding place), but one of her legs got stuck among the mesh of pipes and she stayed there, crying for three whole days! I can proudly say I initiated her little 'rescue operation' when no one seemed bothered. I mean, even with all those fears, I can never see any living creature in pain. (If you really want to know the whole story, click here). I hope that made up for it. :)

I've also never seen cats as pets where I live. The only family person I know who's had a cat as a pet lives in London. I love the stories about that cat (named Swea Pea) and I would very much like to see it for real (and pet it too, if I would be fearless enough)! I would love to have birds as pets but the idea of caging them seems revolting to me. It's just something I don't think I can do. Besides, I don't know how to take care of them.

Apart from these, from what I've seen (real or TV) and what I've read, I think I would love to see penguins for real. And dolphins. They look very cute. I also love the peacock, which is India's national bird and I've seen them too! It's a treat to watch them with their feathers all open, which is a rare sight and I'm so glad I've seen them like that! I also like to see parrots, with their green bodies and red, sharp beaks. They're beautiful. Also, I found some spiderhunters in our neighborhood park and photographed one. They aren't here anymore though. (These three pictures have been clicked by me. :) ). And I just realized these all are birds, not animals. :|

I also really want to go to a wildlife park or a Safari of sorts to see the animals in the wild. since I love natural, beautiful places and forests seem mystical to me (though I've never even been to a forest yet). We have quite a few famous national parks and wildlife sanctuaries in India where I want to visit, like Kanha National Park (the largest tiger reserve in India), the Sunderbans (a part of the world's largest delta formed by mighty rivers Ganges, Brahmaputra and Meghna. We can see all great types of animals and birds there!) and Bharatpur Bird Sanctuary, famous for its birds!

Books and Movies
Since I haven't really been near many animals, I know about them through books and stories and movies. Some books are based on animals and those we read mostly as kids. I loved reading 101 Dalmitians and also enjoyed the movie. Same with The Lion King. Most of the folk tales of India, especially in Panchtantra, by Vishnu Sharma, have the main characters as animals. They're all moral stories for kids with animals to portray behaviors considered good/bad/horrible/acceptable.

Then I found some fascination for horses with The Saddle Club series (Bonnie Bryant), which just grew when I read about special Lipizzaner stallions in The Star of Kazan by Eva Ibbotson. (We had horse riding in school and I remember I did that, but that was a million years ago! I gave up too soon and now I have a certificate I got many years later, of participating in the school's "Horse Show". The certificate doesn't say that I was among those dancers in white gowns who performed at the inauguration ceremony). Eva Ibbotson reminds me of one of her another books, Island of the Aunts, which had different creatures on the said island; not really real animals, fantasy ones, but animals nevertheless. I also find Aslan in the Narnia series interesting (and intellectual, of course). Reading books gives you so much to think about, makes you aware of things and places you never knew existed and even gives you the power so you can dare to imagine new things too. One of the finest points in reading and one that provides that zeal to read more and more!

I don't really watch many movies, except those based on kids. They're just beautiful. One movie that always makes me cry (admitting) is Free Willy, a story about the friendship between a small boy and a whale. I also liked Chestnut, a movie about a dog and two sisters who loved it. I'm sure I've seen more, but I don't remember them at the moment, apart from the famous ones like Stuart Little, Finding Nemo, The Jungle Book and all.

What about you? Do you like animals? Which are your favorites?
Animals Behind the Blog